The help that cannot wait 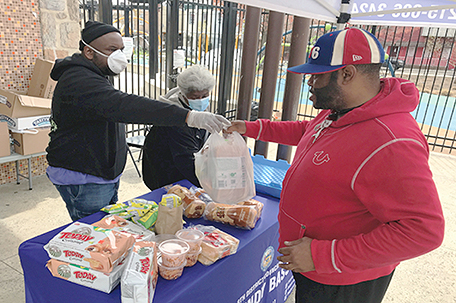 Some Philadelphia elected officials are making sure those in need in their districts can get some food.

Pennsylvania State Rep. Malcolm Kenyatta (D-181st Dist.) said he’s been hearing some heart-wrenching stories from seniors, like this one: “I have nothing left in my kitchen cabinet to eat. My money has run out and I’m afraid to leave the house because of this virus thing.”

“When a senior citizen shares a story like that with me, that’s what fuels my engine to help,” Kenyatta said. His district encompasses a large part of North Philadelphia.

”Since I’ve been in office, in partnership with the SHARE organization and sometimes in partnerships with other groups, I’ve always worked to address hunger,” he said. “Unfortunately, the COVID crisis has moved us to a different mode to deliver this critical service. Last Friday, several staff members and volunteers and I, delivered three dozen food baskets directly to seniors’ homes, using a “no contact” model.”

“We still have work to do, coronavirus or not,” he continued.   “[On April 6] I was in Harrisburg, participating in the State Government Committee meeting, where I ‘m the Democratic Secretary. We had a hearing about a number of pieces of legislation offered by Republican members that would actually roll back the mitigation efforts we’re doing right now at the state level. All these different things that the Governor, in consultation with Secretary Rachel Levine have put in place, to ensure we’re doing the social distancing, to keep folks from spreading this virus, unfortunately I have Republican members who are trying to not only roll back the Governor’s actions right now to save lives, but would actually take away the authority for any Governor in the future, to shut down retail businesses if the need arises during an emergency.”

“This is the type of political power grab that citizens don’t want to see in a time of crisis,” Kenyatta concluded. “They want to see our government working together, to focus on things that are going to A., keep people safe, and B., start looking at what do we do once we move past the mitigation point we’re in.”

State Sen. Sharif Street (D- 3rd Dist.) is another local lawmaker who’s not just sitting in the comfort of his home, kicking back.

“As we social distance, the work increases for some of us,” he said. “Food security is more vital now than ever. I’m glad to volunteer and help provide a space for food distribution in the community with Grands As Parents, Inc.”

In this pandemic it should also be noted that virtual voting in the Pennsylvania State Senate  has begun for the first time in the commonwealth’s history. The lawmakers voted to authorize $50 million for health care systems to assist in responding to the COVID-19 virus, as well as legislation to move the primary election day to June 2, 2020. They also passed a school code that made key statutory changes to ensure that schools have the flexibility to continue educational programs while making sure our teachers can still get paid, and a bill to make it easier for people out of work to collect unemployment compensation. It was a historic day for the State Legislature, with almost all of its members voting virtually from remote locations.

Philadelphia City Councilmember Cindy Bass (D- 8th Dist.) and some of her staff wore masks and gloves, as they handed out bags of groceries to those hardest hit in her district. One of the groups she’s partnered with is the Allegheny West Foundation, (AWF). At the AWF Town Hall, (the Panati Recreation Center at 3101 N. 22nd Street), food is being given away on weekdays to help those in the district.

“We are pleased to be partnering with Ron Hinton, president of the Allegheny West Foundation, in making daily food giveaways possible,” Bass said. “We’re out on the front lines every day as they distribute food packages outside in front of Panati. When we first started doing the food giveaway, we thought we’d be doing it for just one week, but then we extended this service through March and now into April. We wouldn’t be able to do this without Bridesburg Commissary, Allegheny West Foundation and Philadelphia Police Officer Tina Willis from the 39th Police District.  It’s really been a true collaborative effort. “

South Philadelphia City Councilman Kenyatta Johnson (D-2nd Dist.) says that he and his staff have been coordinating with non-profits who have free food to give away.

” My staff and I are staying on top of phone calls to my office and responding just as quickly as we can,” he said.  “The majority of the calls we’re fielding are related to the COVID-19 emergency. People are reaching out about getting assistance to pay their rent or mortgage, and the vast majority are calling about food, just trying to get something to eat.”

“We’ve been working with the South Philadelphia Benevolent Society and the Just Cancer Foundation,” Johnson continued. “We’ve provided food for more than 100 seniors thus far, throughout South Philadelphia. We’ve distributed food in the Point Breeze community, Gray’s Ferry community as well as Girard Estates. We’ve been able to make sure that grocery care packages are being delivered to seniors who don’t have the ability to come outside of their homes.”

Johnson also shared that he’s been in talks with some of his other colleagues and with Judge Patricia Fox, president judge of the Philadelphia Criminal Justice Center.

“We’ve been working to try and get low-level, non-violent offenders home from State Road, including our juveniles,” he said. “The more the coronavirus can spread in these closed and confined conditions, the more people’s lives are at stake.”