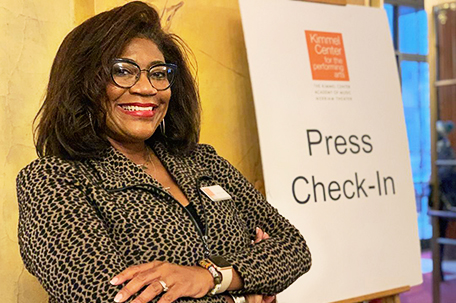 ABOVE PHOTO: Leslie Patterson-Tyler service as director of media relations and communications for the Kimmel Center is just one of her many roles.

Leslie Patterson-Tyler has always wanted to tell stories that make an impact on people’s lives. Through her work at the Kimmel Center and her company, Tyler Made Media, she’s doing just that.

When I first met Leslie Patterson-Tyler, she was the assistant news director at Fox-29 here in Philadelphia.

It had to be a tough job, because the news isn’t always pretty. Throughout a 25-year career as a news executive in Cincinnati, Miami and Washington, D.C., she saw the priority that’s placed on news that might not be the most uplifting.

“When I was in television news, I noticed that police departments knew how to get in touch with us,” she said. “I worked the assignment desk and we had to do beat checks, meaning that we had to call the police departments and find out what happened that day, or overnight, or whatever shift I was on to find out what happened since the last person called, because you had to find out.

We had to do it every two to three hours so you wouldn’t miss anything, because that was important to newsrooms. It always has been and I think it still is. If it bleeds, it leads. So I would watch the news and get depressed.”

“I knew there has to be good news stories out here,” she said. “So I would pride myself on joining organizations, getting out in the community, networking, and using my established network formed through churches, or social organizations or just friend groups and try to find stories that make a difference in the community. Finding people who do good things in the community and not relying on the police blotter to fill my newscast. You can always find a good story if you look for it. It forces you to get creative.”

Telling stories has always been a big part of Tyler’s life. From the moment she graduated high school, she knew that she wanted to be a journalist and tell stories that made an impact, she said.

Tyler continues to use that creativity as the director of media relations and communications for the Kimmel Center, and as the president and CEO of Tyler Made Media, a communications firm that specializes in helping faith-based nonprofits tell their stories.

(Author’s Note: Tyler Made Media is also the producer of “Mark and Denise In the Mornings”, the show that I co-host with the Rev. Mark Kelly Tyler, Leslie’s husband.)

It was through Tyler Made Media that she and the Kimmel Center were connected. She became a consultant for the creative campus when it presented “Kathleen Battle: Underground Railroad” and they needed to get the word out about it.

Rev. Tyler suggested his wife, and with the help of some of her other faith-based clients, and by doing things like having clergy breakfasts and giving discounted tickets to churches, programs like “Underground Railroad”, “A Soulful Christmas” and others have made the Kimmel a lot more accessible.

“For a long time, a lot of people thought that this wasn’t a place for them,” Tyler said. “By my being here, if I can do my small part by telling people that you’re welcome here and we want you here, then I’ve made a difference.”

When you hear the rundown of everything that Tyler is involved in, it sort of makes you wonder if she has time to sleep. She’s training for her fifth Broad Street Run. She executive produces “Mark and Denise In The Mornings.” She’s active in a wide range of community organizations, including the Links and her sorority, Alpha Kappa Alpha.

Her family and her faith help keep her balanced, she says.

“My faith teaches me that there are no accidents,” she said. “So I believe that God’s hand is at work with everything I do. Even my job here at the Kimmel Center was nothing but the Lord, because I wasn’t looking for a job at the time when they hired me. It’s just it came together.”