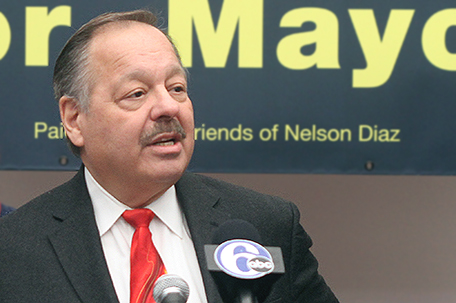 If elected Philadelphia’s next mayor, Judge Nelson Diaz wants to ensure that the city’s children get the educational leg up that he credits for his success.

Here are a few things that you might not know about Judge Nelson Diaz, one of the six candidates running for the Democratic nomination for Mayor of Philadelphia on May 19:

*He is the first Puerto Rican to graduate from Temple University’s Beasley School of Law. A set of his papers is also available for researchers to use at the Historical Society of Pennsylvania.

*He was on President Barack Obama’s short list for Secretary of Housing and Urban Development. He had served as general council for the department during the Clinton Administration.

*He was also a White House Fellow during the Carter Administration and worked as an assistant to Vice President Walter Mondale.

And he believes that none of this would have been possible without the education that lifted him from a public housing project in Harlem to stints as a judge has City Solicitor under Mayor John Street, and, he hopes, Philadelphia’s Big Chair.

“The reason I emphasize education is because education is the great equalizer,” Diaz said. “It’s how a lot of people got into the middle class and out of poverty.”

But while Judge Diaz has been credited with a lot of firsts, becoming the city’s First Latino Mayor, especially with challengers like Anthony Williams, Lynne Abraham and Jim Kenney opposing him, may be his biggest challenge to date. But if he manages to pull it off, it may also show the city’s Political Chattering Class that Latinos are a force to be reckoned with and you ignore them at your own peril.

The SUN sat down with Judge Diaz to talk about his run for the Big Chair, how he’s managed to stand out in a room filled with big names, and what this means for the Latino community.

SUN: Thank you for giving me the time today, Judge Diaz. I guess my first question is, what made you decide to run for Mayor?

ND: The issue, primarily, was education. Having had an opportunity to get an education allowed me to get into the middle class. I saw that the school system here was in crisis, and I felt that I had the formula for making the schools work better. I decided that I had to get into this race because otherwise, we’re going to have the same old, same old. The response that everybody gives is “We’re gonna go to Harrisburg!” But I believe that the answers aren’t all in Harrisburg.

SUN: Now you’ve said that you have ideas that would fix the schools that don’t necessarily involve us going to Harrisburg. Could you elaborate a little bit on that?

ND: Well initially, what happened to me, was that I was a sickly kid. I was asthmatic and lived in a pretty poor environment. Until I was able to get into public housing, and they were able to constrain and help me with my illnesses, until I had an opportunity to learn English, because I was monolingual, until you are able to help a kid that essentially doesn’t have all of the resources necessary; I think that they call that a wrap-around system, until you are able to give those kinds of services, a child is not ready, not really able to learn in our school system.

That’s part of the problem. Teachers walk into those classes and see kids that have never seen a doctor, aren’t getting good nutrition, have never seen an eye doctor…And you don’t know if there are issues related to him or her. You don’t know if there are problems in the home, like addicted parents. You don’t know if this person has come to school and if they’ve had any meal that day; if they’ve had any breakfast. You don’t know all of the social and economic issues that relate to a child. Once you’re able to get those issues resolved, I believe that you can begin teaching a kid, and then, in order to keep him or her out of trouble, you need some afterschool activities, mentors, individuals that they can go to for help, and lastly, you need some connection to the home. Whether it’s a parent, or a grandmother, or the oldest child in a house, you need a relationship so that you can have communication back and forth so that you can help the child. That’s not happening now.

Now how do I know that works? I have examples of it. There’s a school in Camden, New Jersey called the LEAP Academy. It deals with the same population we have here in Philadelphia–predominately minority—and it has a 100 percent graduation rate and all of the kids go to college. Now college isn’t for everybody, and there are alternatives to it, but this school’s success shows that when you provide the appropriate services and support, kids can be successful.

SUN: I listened to a recent forum you participated in and you mentioned getting rid of the School Reform Commission. Now local control is something that many of the candidates agree…

ND: I disagree with you when you say that many of the candidates agree about local control. I don’t think most of them do. I think that I’m the only one that has requested local control. If you really look at it, what [the other candidates] are talking about is a continuation of the same old, same old that we have now. What I’m saying is, let’s get rid of it completely. And you can get rid of very easily by having my two appointments and the Governor’s appointment vote to get rid of it. All you need is three votes. So I’ve got two votes. One more vote, and we’ll disband the SRC.

By doing that, we bring back parents. That avoids the issue I see of patronage and self-dealing that occurs among the people that I see on that school board, most of whom have not sent their kids to the public schools.

SUN: But how do you convince Governor Tom Wolf to go along with this?

ND: I’ve spoken to the Governor and he wants to give us local control. So he’s in tune with us. About 80 percent of the citizens of Philadelphia also want local control. So it is something that these politicos are apparently not hearing because they don’t want to give up their patronage.

SUN: Philadelphia has a high poverty rate. In fact, it’s one of the highest among big cities in America and it’s been a fairly intractable problem. What would you do as mayor to help solve this?

ND: There are a couple of things that are part of my workforce development plan. One is to emphasize training via community colleges for jobs that exist, jobs that are coming on board, and working with the business community to do that instead of using community colleges as feeders to the big colleges, which is how they’re used today.

Secondly, you have to change the tax structure of the city because the poor, the working class, the middle class and small businesses pay a heavy burden under the wage tax structure. It’s not a progressive tax, so it hits the poor and small businesses harder than it hits anybody else. Not only does that hit hard, but be pay a higher sales tax than any other city in Pennsylvania, and we pay a 2 percent cigarette tax. All of those are regressive taxes that impact poor communities more than anyone else.

No one was talking about poverty before I started talking about it. Before that, everyone was taking about working class and middle class. People have to realize that there is an issue of poverty in Philadelphia. The First Congressional District is one of the poorest congressional districts in the country. We have to make sure that there are equal opportunities. That’s why I emphasize education so much. If you educate people in the workforce for the technological future and opportunities on the Internet, with computers, and the capabilities of working with them, at least you begin to make people literate in that area. Increasing literacy in that area is important because it helps your workforce. Now that’s not a new idea. You know who’s doing it well? Sister Mary [Scullion, founder of Project HOME] through her program at the Honickman Center. The question we have to ask is why can’t we expand that kind of activity and make bring it to communities that are really suffering?

In addition, if you change the tax structure of our city, that will bring more small businesses into the city so that they don’t have to relocate on the city line so that they can avoid all of those issues of the wage tax. And then, we can tax the commercial properties what they should be paying because in our city, the city budget is composed mostly of the wage tax and those other regressive taxes. If we emphasize that the commercial properties should be paying a higher share of taxes, that will change the opportunities for businesses to bring workers back into the city. Forty-eight percent of the City of Philadelphia commutes OUT of here to work because the employers don’t want to be here. But I’ve met employers that want to be here. In fact, two days ago, I met with a man from Global, an international business, and he’d rather be in Philadelphia. But he can’t be because he doesn’t want to pay the onerous taxes that we have here. If we can change that structure, I think it’ll be more viable for the City of Philadelphia, it’ll increase the economic base, and that will increase the money that comes into the city, which will allow us to pay for some of the services to kids that I mentioned earlier.

SUN: The Federal COPS (Community Oriented Policing Services) report on Philadelphia was just issued and looks at officer-involved shootings and other issues regarding police and how they’re viewed in the community. Have you had a chance to see the report, what do you think about the recommendations it makes, and what would a Diaz Administration do in terms of this report?

ND: I want the citizens of Philadelphia to know that I want to be the mayor for all of the people. I believe that people will see me as a Mayor that’s progressive and wants to include all of the communities, but I want to empower the poor in particular. I want to empower the poor so that they can get the same chances that I had. I want them to have the opportunity to get their American dream and to make the city better. That’s not happening right now.

SUN: Thanks a lot for your time Judge Diaz. I really appreciate it.