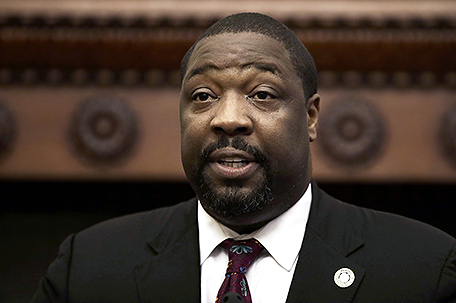 ABOVE PHOTO: This file photo from Oct. 11, 2018 shows Philadelphia City Councilman Kenyatta Johnson as he discusses bail reform during a news conference at City Hall in Philadelphia. Johnson and his wife, Dawn Chavous were indicted on fraud charges in what officials are calling a “widespread corruption conspiracy,” federal authorities said Wednesday, Jan. 29, 2020.(AP Photo/Matt Rourke, File)

In the third week of Councilman Kenyatta Johnson’s trial on corruption charges, the government ends its case, and the defense begins theirs.

For the last three weeks, Philadelphia City Councilman Kenyatta Johnson and the co-defendants in his corruption trial have sat in a courtroom at the federal courthouse on Market Street and listened as the federal government presented evidence that they believe shows that he sold his office to help Universal Companies keep and sell South Philadelphia’s Royal Theater.

Now, it’s time for Johnson, his wife, consultant Dawn Chavous, and co-defendants, former Universal Companies CEO Rahim Islam and CFO Shahied Dewan, to tell their side of the story.

On Thursday, the defense in this case began its arguments to counter the government’s case. Much of the day was expected to focus on Johnson and the charges against him.

The government rested its case on Wednesday after 10 days of testimony from witnesses ranging from former Managing Director Brian Abernathy to the outgoing Superintendent of the School District of Philadelphia William Hite. And in between, there were community activists, former employees, and others.

But one person who did not testify was Ori Feibush, the developer whose pursuit of the Royal Theater has been suspected by many to be at the center of this case.

Johnson has been accused of using his office to help protect a group of dilapidated South Philadelphia properties including the former Royal Theater site that were owned by Universal Companies, a non-profit formed by R&B legend Kenny Gamble, from being reclaimed by the City’s Redevelopment Authority. In exchange, Islam and Dewan allegedly gave the councilman a $66,750 bribe in the form of a “low-show” contract for Chavous.

Dewan and Islam are also accused of a variety of crimes including racketeering and embezzlement as part of the case. Right now, the jury made up of nine men and three women is deciding the bribery charges alone.

As the government’s case came to an end, there were some spicy moments. Eve Lewis, former vice president of marketing and development for Universal, was called as a government witness. She had testified to a grand jury that she hadn’t been aware of any work Chavous had done for the money she was paid, the central theme of the government’s case.

But on the witness stand, a slightly insolent Lewis described Chavous as an asset to the company and stuck to that story, despite Assistant U.S. Attorney Mark Dubnoff’s best efforts.

Saying that she hadn’t reviewed documents that might have helped her hazy memory, Lewis, who admitted to having a romantic relationship with Islam in the past, defended her testimony by saying that she wasn’t quite clear about what they were asking her about initially when it came to Chavous’ workload for Universal.

“I never provided false testimony,” she said. “When you said ‘work’, I didn’t really understand what you meant. She did not answer directly to me.”

Wednesday ended with a familiar face as Assistant U.S. Attorney Thomas Gibson brought Richard Haag, the FBI’s lead case agent in the case, back to the stand to testify about Universal’s attempts to get money from the Philadelphia Schools Partnership and the Susquehanna Group, two interests intimately involved in charter schools, and what Chavous did, or didn’t do, to help the company reach that goal.

Following that testimony, the jury was sent home for the day. Later on Wednesday, the lawyers for the defense argued before Judge Gerald McHugh, the judge presiding over the case, that it should be dismissed, saying the government didn’t prove its case. Those motions were denied.

The case is expected to go at least another two weeks, but there will be no court this Friday or next. If convicted, Johnson and Chavous could face as much as 20 years in prison.