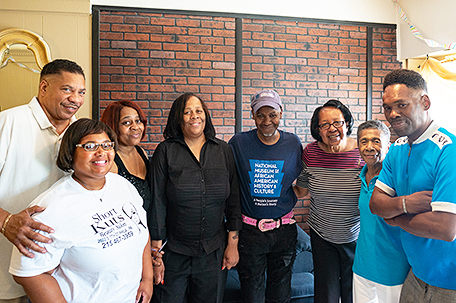 Curtis Adams is an artist in more ways than one.

In order to find the Short Kuts Barber and Beauty Shop on 7th and Shunk Streets in South Philadelphia, you have to really know where to look.

It’s right next to a bodega, and it looks a lot like a house. He does both men’s and women’s hair, so there’s hair dryers in addition to barber chairs. While he’s mostly by himself, he also brings in kids from the neighborhood who may be interested in cosmetology.

That’s how Adams himself got started.

“I used to work at my father’s shop, Mr. Charles Beauty Salon, on Fifth Street,” he said. “I used to shampoo hair for him.” 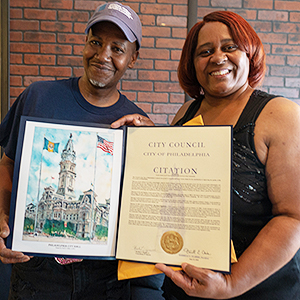 Adams with Vernice Bradley, proudly displaying his proclamation from the City honoring his 25 years of service to his community.  (Photo: Larry McAllister II)

But while he enjoyed doing hair, Adams was also interested in teaching. He not only has his teaching certificate, he also has Bachelors and Masters degrees in History from Temple University and the Community College of Philadelphia (where he was an honors graduate.)

As he celebrates a milestone anniversary for his salon [the salon’s 20th anniversary, 25 years in cosmetology and serving the community], Adams, who will occasionally give haircuts to neighborhood folks going to job interviews because he believes in helping those who help themselves, is proud of what he’s accomplished and how he’s managed to meet the challenges he’s faced, including prostate cancer.

The SUN talked to Adams about the milestone that he and his salon have reached, how he manages to maintain his salon in a neighborhood that’s rapidly changing, and what he hopes to do for the young people in the neighborhood… and how he hopes to use schools shuttered by the School District of Philadelphia to help.

SUN: Thank you for taking the time to talk to me today, Mr. Adams. How long has this shop been open?

CA: I opened this shop on April 28, 1998. We just celebrated our 20th anniversary. I was given a proclamation by the City of Philadelphia and we had a little party.

CA: I had worked with my father for 20 years, and the idea for this came to me. So I opened the shop. At first, I put a lot of flyers out to advertise because I didn’t want to have to pay for advertising. I wanted my work to attract clients.

SUN: Over the last 25 years, this neighborhood really has changed a lot.

CA: Dramatically. It went from predominantly White, to African American, to South American and Asian. 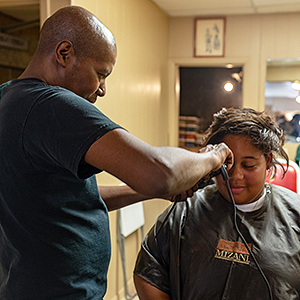 Curtis Adams works on one of his customers.  (Photo: Larry McAllister II)

SUN: But while there are a lot of people of color living here, most of them aren’t Black. And yet, you continue to stay open. How have you managed that?

SUN: When you say “you have to be open”, what do you mean?

CA: I work a lot with the kids around here. I try to encourage them to stay on the straight and narrow and inspire them to do other things. We only talk about positive things in here. The street stuff stays in the street. Here we aspire to greatness.

SUN: Is that the idea behind the Curtis Adams Foundation, and what does it do?

CA: Yes, it is. It’s headquartered in the second floor of this building right now and the goal is to create a community center that kids can go to and study the arts, dance and music, and fashion. Right now, it’s also where my comic book collection is. I want to give the kids a place to go.

SUN: But this is kind of a small building for a performance arts center, isn’t it?

CA: Yes, it is. But I’m hoping that I can get a closed school building from the City of Philadelphia. As long as it has an auditorium, we can refurbish it. I hope to finance it through my CA Fashion Line and I’m working on my non-profit status.

SUN: Thank you so much for your time, Mr. Adams.