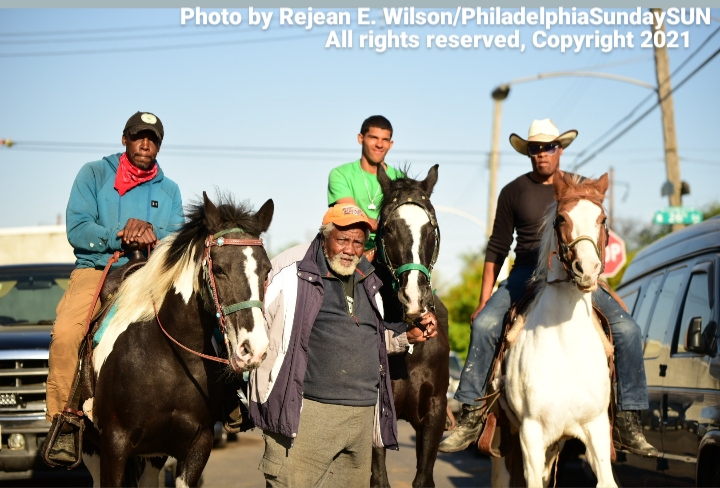 At 82-year-old, Mr. Ellis “El Dog” Ferrell Jr. is a real life cowboy, enjoying the impact of his legacy in real time, while also looking to the future to ensure it continues.

Ask many youth and adults in the city who first taught them how to ride horses, the name Ellis Ferrell is the frequent answer. Ferrell is an undisputed living legend.

For more than 30 years, Ferrell has taught hundreds of inner city youth, both boys and girls,in Philadelphia horsemanship and equestrian sports using his own financial resources.

“I spend all my money on the horses,” said Ferrell, who still uses his own money to teach youth equestrian skills free of charge.

Mr. Ferrell is sharp as a tack and doesn’t slow down.

Visitors come from near and far to visit the club including Dominique who recently visited from Washington D.C. with her teen daughter Brooklyn to see the horses at the club.

“I would definitely bring her back up here,” said Dominique.

“I always wanted to learn how to ride horses,” said Brooklyn.

“While some people leave the cowboy life behind and later return, my dad has always been consistent. Horses are his life. He has taught generations of urban youth in the city,” said Darrin, who is next in succession to officially run the affairs of the club when Mr. Ferrell decides he wants to retire (which will not be any time soon).

Despite being forced to move his club and stables to different locations throughout the years due to gentrification and real estate development, Ferrell always ended up back at Fletcher Street in Strawberry Mansion. It is now next to the Fletcher Street Stables, which have been in existence for over a century and considered to be the cornerstone of Black cowboy culture.

The Fletcher Street Urban Riding Club is desperately needed during this time when youth need a mental escape from the pitfalls of urban life which include the reality of being targeted for simply having Black and Brown skin.

Darrin and Mr. Ferrell’s grandson Milan, who he also taught to ride horses, help him maintain the stable operations and run the riding club. A steady flow of volunteers come through regularly to help and always check on Mr. Ferrell.  And, he teaches them what needs to be done at the stables.

Ferrell has introduced so many youth to equestrian arts over his lifetime that he has lost count.

Selby reminisces over his years as a youngster and the impact Ferrell had on his life and the community.

“Pops would bring all these horses around and let the kids ride them,” said Selby.

The riding club’s property, which is primarily horse stables, is brimming with love and pride serving as a safe haven and escape from inner city troubles.

The horses at the Fletcher Street Urban Riding Club are stunningly beautiful. Each stable door has the horse’s name on them. Petting the horses such as Chloe, BLM, Patches and Sally Ann takes your mind away from the troubles of the world.

Ferrell connects with his horses and knows their individual personalities as he walks around the stables petting and interacting with them.

“BLM has an attitude,” Ferrell said jokingly as the regal horse playfully nipped at him.

You can tell the horses love interacting with Ferrell too. They have a connection. Ferrell is the horse whisperer.

Although Ferrell’s riding club is often confused with the Fletcher Street Stables, they have a collaborative relationship that consists of helping one another.

Ferrell even has mentees that work at the neighboring stables. One of them is 32-year-old Jamil Prattis, a real life cowboy that starred as Paris in the Netflix film “Concrete Cowboy” that was filmed on Fletcher Street.

Prattis has been riding with Mr. Ferrell for over two decades since he was a child. He helps Ferrell with duties along with other volunteers at the riding club. Prattis describes his day-to-day.

“I feed the horses the hay, water,” said Prattis among the many tasks he performs.

For the record and to be clear, the film is not about Ferrell. It was based on the fiction novel “Ghetto Cowboy” by author Greg Neri who Ferrell says interviewed him as an inspiration for his book.

Ferrell, with the help of a benefactor, was able to acquire three lots for the riding club, moving into newly constructed stables in 2019.

Unfortunately, Ferrell is now forced to search for a new location for the horses to train, graze and use as a riding ground. The pasture grounds across the street from the riding club stables was purchased by the Philadelphia Housing Authority for one dollar (yes, $1) to build a senior housing development.

The club did not own that land.

In addition, the filmmakers of Concrete Cowboy formed their own non profit while filming called the Philadelphia Urban Riding Academy — causing confusion that may result in the public thinking that they are donating to the Fletcher Street Urban Riding Club and vice versa.

Per Ferrell and son Darrin, Councilman Darrell Clarke promised to help secure an alternate location to train the horses.

“Councilman Clarke, we can’t praise him enough. He is doing everything he can to help us find a larger place that we can turn the horses out to graze and exercise,” said Ferrell.

The joy of being one of Philadelphia’s Black urban cowboys