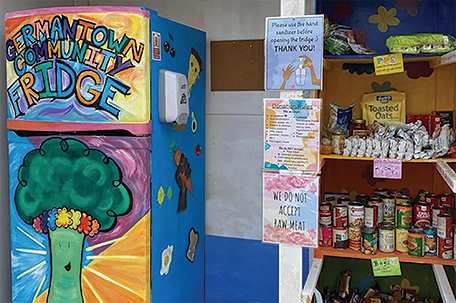 In 1994, Congress declared Dr. Martin Luther King Jr.’s birthday a holiday and a day of service. Every year, on the third Monday of January, people continue to honor the late Dr. King’s legacy by volunteering in their respective communities.

While there were several community fridges in the city of Philadelphia, Ellis sought to bring a fridge to the Northwest section of the city as a mutual aid program. After presenting the idea to Greene Street Friends, they were happy to let Ellis use the sidewalk space in front of the school to house the fridge. With its motto “take what you need, leave what you can,” the fridge promotes sharing and a community caring and providing for the members within it. The pandemic has created tremendous financial hardships for many, and The Germantown Community Fridge offers a plethora of essential items for members of the community to take free of charge.

Nicole Fisher, who is no stranger to service and giving back to the community, spearheaded the day of service at The Germantown Community Fridge. Several years ago, Fisher also led the Refuge project, a sector of the Aspire No Limits Mural Project that Mural Arts created for her son Asa’s father, Dr. Shawn Leon White who passed away in 2013. Dr. White was a known as an advocate for black men and boys in the Philadelphia community.

Mural Arts was compelled to produce a mural in Dr. White’s honor based on the community service and health and human services work he did throughout the city. Upholding the legacy of the late Dr. Shawn Leon White, and the late Dr. King served as inspiration for Fisher to lead the day of service with her 5th grade son Asa White.

“Initially it was a call from Asa’s teachers at Jenks Academy for the Arts and Sciences in Chestnut Hill, the school he attends. In the morning they have a morning community meeting where they talk about current events and how they’re feeling with everything that’s going on in the world… anything they want to talk about personally, that’s their time”, Fisher explained. “As we were coming upon MLK Day of Service, the teachers were asking the kids to come up with service ideas of things they could do to participate on the day. I learned about the Germantown Fridge a few days prior. The kids were talking about it and I popped into the chat, shared the details and said we could potentially do a service activity here for 5th grade. That’s how we got to where we are today with the children being able to participate in such a wonderful service activity.”

Fisher, who created the flyers and the press releases for the day of service, was thrilled with the turn out. Students from a variety of schools as well as adults from all over the city, volunteered and donated.

“We were there from 12-2pm with a constant flow of folks donating to the pantry and refrigerator, as well as people from the neighborhood coming to get the goods they needed for their homes.”

Fisher added, “it’s just been a really amazing thing for me to be a part of with Asa, specifically because it has shown him what it means to give. It’s shown him what it means to apart of community and how something as simple as a sidewalk refrigerator can really help to heal and bring people together. I think Asa saw the impact of what we did while we were there. He said, “mom, I feel really good about what we did today.”

An aspiring actor, Asa White is walking in line with both of his parents’ dedication to giving back. He also participated in the Philadelphia Talking Breakfast web series, run by Yolanda Wisher. The Talking Breakfast series highlights local creatives and focuses on how they start their day. Fisher, beaming with pride, shared Asa’s experience.

“As far as I know he was the only child to do one. He shot and edited the video himself with his own ideas and concepts. The only thing I participated in was making the breakfast”, she said. “Part of his stipend for doing the breakfast was to either get $100’s worth of groceries delivered to our house on them, or he could choose to donate the $100 to a local food bank. I didn’t want to make the choice for him, so I asked what he wanted to do. He said ‘mom I think I want to donate it, because I think that’s the right thing to do.’ So he donated it to the Germantown Fridge.”

Asa’s episode of The Philadelphia Talking Breakfast series will be available to view on IG @philadelphiacontemporary and the full video is coming soon to their YouTube channel. Be sure to follow @asawhiteofficial on IG to keep up with the bright future of this young man. The Germantown Community Fridge currently has two locations at 20 W Armat Street and 19 E High Street. To find out more about when and where you can donate to The Germantown Community Fridge visit linktr.ee/germantowncommunityfridge or follow them on social media @germantownfridge.