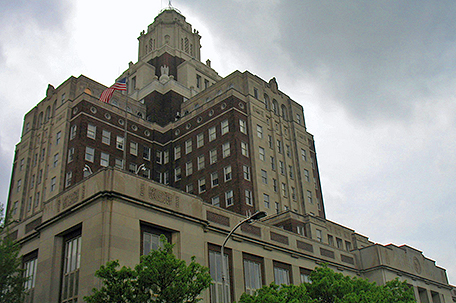 As it celebrates its 50th Anniversary at the U.S. Customs House, the Philadelphia Passport Agency is dedicated to its mission of helping Americans see the world.

For most Americans headed overseas via Philadelphia International Airport, the trip is kind of easy. Sure, you have to go through the airport check-in lines that require you to take off your shoes, your belt and most of the stuff in your pockets.

But if you find yourself in a jam due to an expired passport, you go to Orlando Rivera and his fellow travelers at the Philadelphia Passport Agency.

Rivera is the director of the Passport Agency, which celebrated it’s 50th anniversary with a party at its offices in the U.S. Customs House on Chestnut Street on Monday.

For the last 12 years, Rivera has been the leader of the office that served 36,000 residents in its first year of 1967, and has now gone on to serve 217,000 local residents who found themselves in various travel emergencies ranging from finding out at the airport that your passport has expired, to having to acquire a passport for an international emergency in 2016.

Because many of these people are in stressful situations, Rivera and his colleagues try to bring a kind of “brotherly love” to these interactions.

“We try and calm them down because when they come here, you’re dealing with someone who is under stress,” he said. “Something terrible has happened in these people’s lives. We’re the friendly agency. We are here to take care of the American traveling public.”

Philadelphia Mayor Jim Kenney and Acting Assistant Secretary of State David Donahue were also on hand to celebrate the anniversary of the office, which is mostly appointment-only, but does accept emergency walk-ins. Those in attendance were treated to a tour of the office, which included a full explanation of its functions and refreshments afterward.

While the celebration itself didn’t center on this, the actions of the Trump Administration in terms of international relations weren’t far from the minds of the participants. What is the mission of a passport office at a time when the phrase “immigrant ban” has become a part of our discourse and our public officials must make statements decrying the desecration of graves at a religious cemetery?

To Mayor Kenney, celebrating the passport office while those things are a part of our reality didn’t quite compute.

“It seems to be a duplicitous message coming from Washington that we’re celebrating the passports, yet we’re closing off the borders to people in seven countries because they practice a different religion than ours,” he said. “Mikvah Israel is across the street from University of Penn Hospital. Some of [the synagogue’s early members] signed the Declaration of Independence and were patriots.”

But to Donahue, the current climate toward reinforces the office’s basic mission. At a time when 1 million students from around the world come to America, study at our colleges, and often keep that knowledge here by becoming entrepreneurs and starting companies in the United States, embracing all of the world’s peoples can only benefit us, he said.

“The mission of the passport office hasn’t changed,” he said. “I think it’s extremely important because people to people communication is one of the best ways for the world to get along. If you meet someone, know someone, travel around and see how they live, and learn about their cultures, you have a better understanding that people are people all around the world and you’ll want to know all about them. The more we understand each other, the stronger our country becomes.”

But no matter what happens in the country at large, the Passport Office is sticking with it’s mission of being a place where those needing a passport in an emergency can find a friendly face, Rivera said.

“We are the melting pot of the world,” he said. “We have folks come in from almost every country you can think of and we open our arms to individuals around the world.”