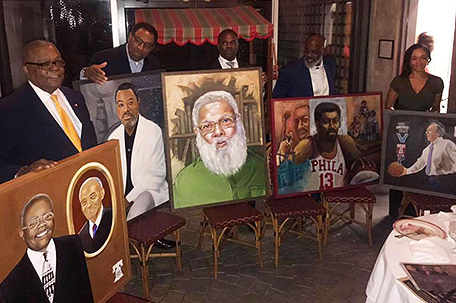 The late basketball player Wilt Chamberlain, who took the world by storm, and Fran Dunphy, the coach with the most wins in Big Five history, were among those honored at the Fourth Annual Philadelphia Legacies Portrait and Community Awards program. (More scenes from the Legacies’ event in All Around Philly, pg. 12.)

Each year, Philadelphia Legacies honors Philadelphians who have made major contributions to the city. To honor them, portraits of each honoree are commissioned by an exceptional local artist and presented and unveiled at the event.  Also there are a number of community service recipients recognized for their contributions that have influenced the growth of Philadelphia’s communities.

There were over 100 in attendance at the event that was held at the Restaurant School at Walnut Hill College, on September 21st.

According to Steve Satell, the founder and executive director of the Legacies Awards, the program was established in 2016 by a City Council resolution. The event was to become an annual observance to strengthen the awareness of the city’s diverse cultural heritage and its importance as a destination for visitors from around the world.

Satell noted that the Legacies Awards honor Philadelphians who have contributed to Philadelphia though academia, media, sports or philanthropic and entrepreneurial endeavors. This year’s awardees included:

The late great Wilt Chamberlain made an indelible mark on the game of basketball. After graduating from Overbrook High School, he headed to the University of Kansas and then on to the professional basketball scene as one of its first African American players. At 7 feet 1 inch tall, his physical stature, athleticism and talent helped him dominate the NBA. He achieved numerous NBA records in scoring and rebounding. He is the only player to score 100 points in a single game or average more than 50 points in a season. Chamberlain is the only player in NBA history to average at least 30 points and 20 rebounds per game in a season, which he accomplished several times. On December 5 at halftime, of the 76ers/Oklahoma City Thunder game, there will be a dedication of the Wilt Chamberlin Forever stamp.  He will be the first NBA player to be honored on a stamp.

Credited as the coach with the most wins in Big Five history, Dunphy is known as Mr. Big Five because he played and began his coaching career at La Salle University, received his masters at Villanova University and coached at both the University of Pennsylvania and Temple University.  He was one of the 25 active NCAA Division I coaches with 500 victories. He is the fifth coach to win 200 games at two different Division I programs while taking both schools to seven or more NCAA Tournaments. Dunphy also was inducted into the Big 5 Hall of Fame in April. In addition to coaching, he  continued to teach classes in the business schools at the University of Pennsylvania and Temple University.

As the chief astronomer and planetarium director for the Franklin Institute for over 20 years, Pitts has enchanted thousands with his presentations at the planetarium. He has been named one of the 50 most important African Americans in research science. He has also served as president of the Philadelphia Chapter of the Tuskegee Airmen Inc. Pitts has made numerous television appearances, including such shows as “The Colbert Report”, “The late Show with Craig Ferguson”, “Countdown with Keith Olbermann”, “The last Word with Lawrence O’Donnell” and “The Ed Show”. Since 1991, he has co-hosted a weekly radio discussion program called “Skytalk” on WHYY-FM in Philadelphia.

Throughout his career, Delaney challenged and broke barriers in the literary world as a science fiction writer. He was thought to be the first African American science fiction writer, but there had been others. His work garnered because he created unique characters borne of his life experiences.  Delaney’s two aunts were active in the civil rights struggle and he wrote about them in “Atlantic Model 1924.”Delaney spent a notable career in academia a professor. Although he was a high school graduate, he became a tenured college professor based on his work at the University of Massachusetts after having completed a number of teaching fellowships. He later came to Temple University where he taught for 14 years. Delaney’s began his life in Harlem, New York, where his father owned a funeral home and his mother was a library clerk. His grandfather was the first African American bishop of the Episcopal Church.

A member of a Philadelphia Legacies Family, Cox’s father also was so honored for his 45 years of service as a judge. The senior Cox encouraged his son to reach high. The advice lead him to join the Navy’s Acrobatic Fighter Team-Blue Angels which prompted him to learn to fly and to study aerodynamics. Dr. Cox earned his degree from Drexel University in Bio-Physics. He is the founder of the Greater Philadelphia Region Louis Stoles Alliance for Minority Participation (Philadelphia AMP) program funded by the National Science foundation. Dr. Cox through Philadelphia AMP, a tri-state alliance of nine higher education institutions, has helped numerous minorities achieve their doctorate degrees in the sciences.

The Young Person to Watch Award

Danielle P. Jeter — Received the Young Person to Watch Award: Gov. Tom Wolfe appointed Jeter to the Commission on African Affairs for two terms. In that role she advises the Governor on initiatives required for the advancement of the African American Community. She also launched her own marketing and public relations firm that specializes in event production and public relations. The firm has an international client list and an intern and mentoring program called Pipeline.

W. Cody Anderson — Received the Life Achievement Award: Anderson holds a strong legacy in Philadelphia radio history. He is consistently appears on lists as one of Philadelphia’s 10 most influential African Americans. He gave Philadelphia voice through radio. He is credited with transforming WDAS radio into a “Philadelphia Powerhouse”, creating a community focus at WHAT. He was also instrumental in building Philadelphia talk radio station 900 AM WURD. Anderson is currently the president and CEO of APS Associates Public Relations.

This year’s presentations also included recognition for various community awardees for their individual efforts to improve the quality of life for others and their tireless work to make a difference. The Community Award Winners were:

Brennon Jones — Known as the barber to the homeless, he can be found with his barber chair on an island in the middle of South Broad Street with homeless members of the Philadelphia community waiting for a quality haircut. Brennon’s work with the homeless has not gone unnoticed. He has been featured on a number of local and national radio and television talk shows.

Karen Asper Jordan — Serves as president of the Cecil B. Moore Philadelphia Freedom Fighters Alumni, who became a community activist in 1965 at the age of 16. Her experience was shaped by the NAACP and the late Cecil B. Moore, Esq., who led the Girard College demonstration in 1965 until it agreed to abandon segregation. The late civil rights activist, Barbara Cox, noted of Jordan, who worked as a nurse for 40 years, “Karen received her Master’s degree from the Movement and PhD from the neighborhoods of Philadelphia.”

Eric John Nzeribe — Founder/publisher of Fun Times Magazine, a publication that promotes the interest of people across the Black Diaspora. He employs creative marketing and advertising on a variety of platforms to establish a base of communication, access, community bonding and opportunity. There also are monthly community and education sessions sponsored by the magazine.

Dr. Joi C. Spraggins — Founder and president of Legacy Pathways, LLC, a management consulting and training company that specializes in leadership development, communications, energy, education , S.T.E.M. (Science, Technology, Engineering and Math). With Steven Covey and Brian Tracy, Dr. Spraggins also co-authored the book “Mission Possible! Learn How to Reach Your Potential From Some of the World’s Most Successful Possibility Thinkers”.

Emily Taylor — Director of One Step Away, a newspaper written and sold on the streets by homeless people. The organization is a creative and successful response to assisting homeless people get back on their feet by sharing their stories and making a living through selling the newspaper.

A portion of the dinner’s proceeds will benefit the following community service programs: The Moonstone Arts Center, The House of UMOJA, One Step Away, Big Brothers Big Sisters, The Greater Philadelphia Region Louis Stokes Alliance for Minority Participation and the Philadelphia Association of Black Journalists.