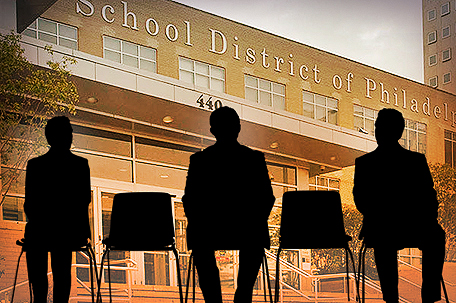 If nothing else, the three men vying to become the School District of Philadelphia’s next superintendent showed the parents, teachers, students, and all the district’s stakeholders that they have the endurance for the job.

The NCAA Basketball Tournament, or March Madness to basketball fans, brings together 68 teams from around the country to play a series of games designed to get the number of teams down to one, the national champion.

This week, students, parents, teachers, and other community stakeholders got the chance to take on the final three contenders vying to replace William Hite to become the next superintendent of the School District of Philadelphia.

John L. Davis Jr., chief of Schools for the Baltimore City School District, Krish Mohip, deputy education officer for the Illinois State Board of Education, and Tony B. Watlington, superintendent of the Rowan-Salisbury Schools in Rowan County, North Carolina, each spent an entire day with district stakeholders. The interviews included meetings with several individual groups and ended with a town hall-style discussion.

The process of finding a replacement for Hite, who announced he was leaving the 120,000 student district in September, has been going on since October. A 13-member advisory committee made up of a cross-section of Philadelphians advised the School Board.

While the search for a new school leader to replace Hite when he leaves in August has been an intensive process, it hasn’t made everyone happy. No women made the final cut. Neither did anyone from Philadelphia or who currently works for the district.

In a profession where women make up the majority, it was seen as a bad look by many longtime education advocates that remembered that the last woman to hold the office was Constance Clayton.

“I’m very disappointed,” said Veronica Joyner, president of Parents United for Better Schools, Inc. and founder and chief administrative officer of the Mathematics, Civics and Sciences Charter School. “Other than Dr. Clayton, we haven’t had a woman, so to me, women are not being respected. Most of our top educators are women, but no women were selected?”

While he agrees that it’s a little disappointing that there wasn’t a local contender, State Rep. Jordan Harris, the House’s Democratic Whip, believes that it’s about the experience of the candidates rather than where they came from.

“Listen, I would have liked to see somebody who matriculated through Philadelphia schools or who matriculated through the ranks of the Philadelphia School District,” he said. “But, what I’ve told people is that, you know, there are lots of cities across this country that give you a Philadelphia-esque experience with regards to urban education. So as long as this person comes with that pedigree and has experience running this type of district, I think we should be willing to give that person opportunity to lead the School District of Philadelphia, and as long as they have the desire, and the qualifications. Having somebody who’s qualified, who has the cultural competence, and who has the experience is the most important in this process.”

“The top three candidates were picked out of a group of seven people,” said  David Thomas, a member of the advisory board and vice president of strategic initiatives and community engagement at Community College of Philadelphia. “While the advisory board was able to give their impressions, the final decision was the school board’s,” he said.

“We interacted with the final seven individuals who were moved forward,” Thomas said. “Within that final seven, there were women.

There were local candidates as well, too, We spent several days speaking with these particular candidates. And at that point, that feedback was given to the board. And the board made the determination who they were going to move forward. It was a very transparent process.”

The Alliance for Philadelphia Public Schools held a protest at the School District’s building at 440 Broad St. on Thursday to demand that the process be reopened.

However, considering the board hopes to name a new superintendent next week, that’s highly unlikely.