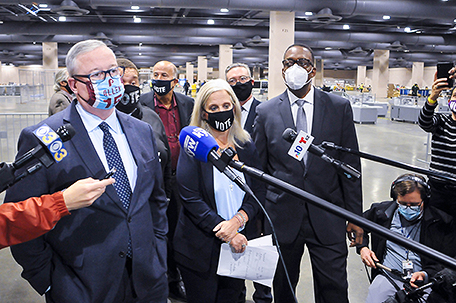 As one of the so-called “battleground states” — Pennsylvania in general, and Philadelphia in particular — was a hub of activity in the days leading up to Election Day.

One of the Commonwealth’s old tourism sayings was “You’ve got a friend in Pennsylvania.”

Over the next few days, Republican President Donald Trump and his Democratic challenger, former Vice President Joe Biden, will be hoping that they have more than a few friends in Pennsylvania, and that these friends have either headed to the voting booths or have already dropped their ballots off at a satellite office.

Because the eyes of the nation will be on Pennsylvania due to its status as a so-called “battleground state,” residents will get more time with candidates and their surrogates than they might even want to before Tuesday. Also, news organizations, including this one, will be telling the story of what happens once the votes are cast, and even how the death of Walter Wallace Jr. will impact the elections.

Here’s a rundown of some of the things that have been happening since the last debate, which was kind of the beginning of the home stretch:

Watching the presidential debates in 2020 took a lot of patience on the part of Americans trying to make a final decision on who to vote for.

But it sometimes helps when you’re watching the debates at a backyard party with CNN stopping by.

About 75 people gathered — using social distancing of course — at the home of Cherelle Parker, City Council’s majority leader for a debate party. Attendees were given mask-friendly snacks, water and a comfortable place to under a still night sky as NBC News’s Kristen Welker put Trump and Biden through their paces Philly style.

Among the surrogates that paid a virtual visit to Philadelphia on behalf of Democratic candidate Joe Biden this weekend was Rep. Ayanna Pressley of Massachusetts. Pressley, a member of President Trump’s favorite group of congresspeople, “The Squad”, was speaking with voters about the importance of having someone in the White House that recognizes the suffering that voters are going through thanks to a combination of the coronavirus pandemic and a myriad of unresolved social issues.

How that’s been handled thus far shows the contrast between Biden and Trump.

Trump doesn’t seem interested in fixing that pain, Pressley said, adding that many of his voters from 2016 are starting to realize this.

Because this election represents the largest attempt at mail-in voting in the Commonwealth’s history, it’s going to take a big effort to count the ballots once they come in.

Thanks to a $10 million grant from the Center for Tech In Civic Life, the Philadelphia City Commissioners have put together an impressive setup to count the votes that resembles a mailroom sorting center at the Pennsylvania Convention Center.

The secure counting center requires COVID-19 screenings, security bands and other precautions to get in, and starting at 7am Election Day, counting of the ballots that have been mailed in or dropped off at satellite voting centers will start to be counted, said Lisa Deeley, chair of the City Commissioners. Same day voting ballots won’t be counted here, she said.

On Monday, reporters were invited to see how the counting center would work. Resembling a post office sorting room, the ballots will go through an assembly line that will remove them first from the security envelope, then the privacy envelope before smoothing them out and putting them in a pile.

Once the ballots are in that pile, they will be taken to a bank of vote counters that will do the final tabulations.

Tuesday was the last day to go to a satellite center and apply for a mail-in ballot to vote in Tuesday’s general election. Among those who went to the satellite center at the Creative and Performing Arts High School in South Philadelphia was City Councilmember Kenyatta Johnson.

Johnson, who is also a ward leader in the 36th Ward, praised the Commissioners for the job they’re doing to try and get everyone’s vote out and counted. He also encouraged Philadelphians to make their voices heard.

“Right now, this is probably one of the most historic elections that I’ve seen in my lifetime,” Johnson said. “And, as one of the candidates has mentioned, character is on the ballot. So when we talk about police reform, when we talk about affordable housing, when we talk about quality education, when we talk about peace not guns, that’s what individuals that go to the polls are going to be casting their vote for. For me, it’s about changing the direction our country is going in. So, we’re encouraging, advocating, and challenging as many voters as possible to go out and vote.”

“Everybody gets a vote,” Chairwoman Deeley said. “So come out, whether it’s today or it’s in person by Nov. 3. Your vote is your voice. We need you to come out and vote.”