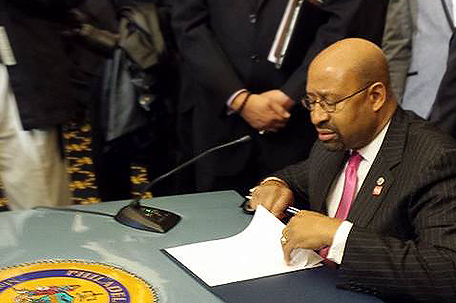 ABOVE PHOTO:  Mayor Michael Nutter signing the Revised Executive Order for the Commission as Bilal Qayyum and others look on after Monday’s press conference.  (Photo:  City Hall/Facebook)

The Mayor’s Commission on African American Males unveiled its recommendations to help the city’s Black men. But if history is any guide, this commission’s mission might be a little sketchy beyond 2015.

In 1991, then-Mayor W. Wilson Goode issued an executive order creating The Mayor’s Commission on African American Males, a group whose charge it was to find ways to improve the lives of Philadelphia’s Black male population.

Twenty-three years, and three mayors later, the Commission unveiled its set of recommendations on Monday and received its charge through a revised Executive Order signed by Mayor Michael Nutter.

Because African American men make up such a large part of Philadelphia’s population, addressing the needs of this group is vital to the city’s future, Qayyum said.

“There is a strong belief that until the City addresses the needs of this community in general, Philadelphia won’t be a first class city,” Qayyum said. “Black men can no longer be locked out of opportunities.”

“You cannot experience life, liberty and the pursuit of happiness if you don’t have a job,” Nutter said. “We cannot move forward as a city if a significant portion of our population doesn’t move with it.”

The Commission divided its recommendations into three categories: Wellness, Achievement and Success.

In the area of Wellness, the Commission recommends that Health Empowerment Zones be instituted in high-crime areas to provide assistance to African American men who have felt the impact of violence and intergenerational trauma.

In the area of Achievement, recommendations include advocacy and mentoring for young Black men with the purpose of helping them become proficient in reading and math and guiding them toward academic achievement.

Partnering with colleges and universities, creating a Black Technology Community and helping Black Tech companies connect with the money needed to be sustainable were some of the recommendations made in the area of Access.

By helping young Black men connect with these things, a lot of the issues they face can get closer to being resolved, said Eric Grimes, a member of the Commission.

“The real issue is often not the issue you see,” Grimes said. “The issue is constricted opportunities.”

While constricted opportunities can cause problems among the city’s men, many of these men have wives, girlfriends or children that are impacted by some of the bad decisions they make. When asked about when an initiative will be introduced to take on the unique issues of Black women, Nutter said this Commission does some of that already.

“Taking on some of the issues that men face will get women’s challenges addressed as well,” Nutter said. “We’re seeking to be as inclusive as possible, but we have to deal with the facts. When 75 percent of the people being killed are young Black men, and they’re being shot by other young Black men, that has to be addressed.”

The 23-year-gap between Mayor Goode’s creation of the Commission by and Mayor Nutter’s embrace of it shows that much of what happens with the report, it’s recommendations, and the Commission itself can depend on who occupies City Hall after Nutter’s term ends in 2015. Although murder rates and lack of opportunity issues for African American men were higher during the Rendell and Street administrations, there was no support for implementing the Commission from either mayor. None of the people who are currently being mentioned as mayoral candidates were at the press conference.

Goode, who knows from experience that putting too much faith in the Mayor’s Office can bring things to a standstill, says the Commission has already taken that into consideration.

“We are concerned about that,” he said. “But we have a plan to deal with it. If a new mayor comes in that doesn’t embrace the recommendations, we’re prepared to become an external force. We’re not going to disappear. We’re going to do what we can no matter what. This is a blueprint. We’re going to follow it.”