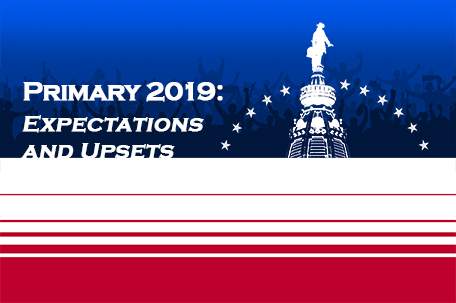 While some aspects of Philadelphia City Government will change thanks to Tuesday’s primary elections, some of them won’t.

On Tuesday, the Pennsylvania primary brought some changes to the landscape of Philadelphia’s politics.

But while there will be a new Sheriff in town, and City Council is going to start skewing a bit younger thanks to some At-Large wins and a very big District Council takedown, the city’s top office, the Mayor’s office, is probably going to remain occupied by the same person come November.

Although Williams had been dogged by sexual harassment allegations throughout the campaign, many political observers thought he would still retain his office.

He was still popular among the city’s ward leaders and there was even a group of women, Sistahs for Jewell Williams, that was campaigning for him.

But the sexual harassment allegations —- the city settled with Marlaina Williams for $127,000, and Vanessa Bines continues to work in the Sheriff’s office while her federal suit is pending —- proved to be too much for Williams to overcome, despite his refusal to talk with reporters about them, or anything else during the campaign.

“This wasn’t just a “me too” election, it was an “us too” election,” Bilal said. “Women spoke up with their votes. This is a glass ceiling that’s been broken.”

Among those who thought that Williams should step down due to the allegations was Mayor Jim Kenney. Because of this, some in the Black community felt he was being hypocritical because he hadn’t called for the same for City Councilman Bobby Henon, who is currently under federal indictment along with Local 98 Business Manager John Dougherty.

Since Kenney’s primary opponents, former City Controller Alan Butkovitz and State Sen. Anthony Williams, were trying to paint him as out of touch and unwilling to interact with the city’s Black community, many thought that he might make history as the first Mayor in a long time to not get a second term.

It didn’t work. Not only did Kenney win the Democratic primary, but thanks to help from the unions who endorsed him, he won handily.

“While I don’t ever believe that anyone should get comfortable in politics, I don’t think [Kenney] was ever in trouble,” said Councilwoman Cherelle Parker, who also won her primary Tuesday. “He stayed focused on the issues and on his accomplishments.”

During his speech, Kenney thanked everyone from his family to his opponents.

But while he also touted his successes, such as bringing more money to the City’s public schools, reducing the number of people in jail by 3,500, and increasing the minimum wage for City workers to $15, Kenney also acknowledged that he had a lot of work yet to do.

“For all of our triumphs, we still have much more work to do,” Kenney said. “Our homicide rate is moving in the wrong direction. The opioid crisis is wreaking havoc on so many families and in many of our neighborhoods. I’m ready to keep confronting these challenges and make sure that the next chapter in Philadelphia’s history is a positive one.”

“I won’t stop fighting until every Philadelphia resident can live in a safe, clean neighborhood with access to quality schools and family-sustaining jobs,” Kenney continued. “I want Philadelphia to be a city of equity – where everyone has the same chance to succeed, no matter which neighborhood they grew up in.”

But probably the biggest surprise in Tuesday’s election was the knowledge that for the first time in 40 years, there won’t be a Blackwell occupying the Third District’s Council offices when the next council is sworn in in January.

Jamie Gauthier not only defeated Councilwoman Jannie Blackwell in the Democratic Primary, she did so by 12 percentage points.

Prior to Tuesday, the word on the streets in the Third District was that Gauthier couldn’t beat Blackwell because the newcomer wasn’t going directly to voters to campaign.

She was also affiliated with Philadelphia 3.0, a political action committee that had managed to generate a certain amount of mistrust with residents.

None of those things actually slowed her down.

Gauthier becomes one of three millennials headed to Council should they all win in November’s general election, something that will be significant in a body that skewed much older. Isaiah Thomas and Katherine Gilmore Richardson were among the top five vote getters in primary for City Council At-Large.

Thomas is an educator and activist who had run for City Council twice before, barely missed the cut for City Council At-Large in 2015, but this time he came in third. Gilmore Richardson served as Chief Of Staff for City Councilwoman Blondell Reynolds Brown, who announced that she was joining Councilman William Greenlee in stepping down from Council earlier this year; both of them were endorsed by the Democratic City Committee.

The top vote getter for the Democrats for Council At-Large was Councilwoman Helen Gym. Councilmen Derek Green and Allan Domb rounded out the top five. On the Republican side, incumbent Councilmen At-Large David Oh and Al Taubenberger managed to get on the November ballot with Oh coming in fifth among the Republicans.

Joining Oh and Taubenberger on the general election ballot will be Dan Tinney, Matt Wolfe and Bill Heeney.