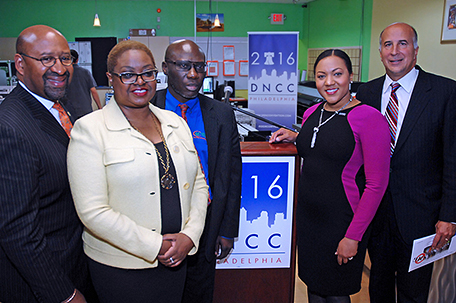 In July 2016, the Democratic National Convention will come to Philadelphia…and planning has begun in earnest.

Right now, the space in the 1900 Market Street building that serves as the headquarters for the planning committee for the 2016 Democratic National Convention is kind of empty.

There’s maybe three or four offices with people in them, people whose job it is to get the logistics of the convention, such as signing venue contracts, preparing delegate housing and transportation, mounting security plans with the Secret Service (this is considered a National Security Event) and scouting out the best locations for the convention’s media village.

While the convention isn’t scheduled to take place until July 2016, there are a lot of pieces that have to be put in place, said the Rev. Leah Daughtry, the Convention’s Chief Executive Officer.

For example, on the day that the SUN sat down with Daughtry, she was preparing for the Democratic Party chairs from all 50 states and American territories to come to town and pick the hotels that their delegations will call home during the convention the next day.

“Planning a convention is a lot like building a house,” said Daughtry, who also served as CEO for the 2008 Democratic National Convention in Denver. “What we’re doing now is getting the contracts signed for the hotels, the arena, the media workspace…We’re seeing what it’s all going to look like.”

Philadelphia’s DNC2016 Host Committee, a committee that included such heavy hitters as Mayor Michael Nutter, former Gov. Ed Rendell and City Councilwoman Marian Tasco, pulled out all of the stops in its effort to best New York and Columbus, Ohio, the other two cities in contention for the convention.

It was that effort that made Philadelphia the obvious choice, Daughtry said.

“When you’re choosing a convention city, there’s certain things that you look for,” she said. “You look at the logistics. What kind of housing is available? What about transportation? What will the delegate experience be like? Can we work with the leadership? When we put all of those factors together, Philadelphia was the best choice.”

When the press conference announcing the DNC’s decision to bring its convention to Philadelphia was held in City Hall earlier this year, the question of local participation in general, and minority participation in particular, came up, specifically in the area of contracted services.

“We want to touch as many neighborhoods as possible,” she said.

While having the Democratic National Convention here brings attention to the city for all the right reasons, it is what is known as a National Security Event, something that Philadelphians still recovering from the last such event, the visit of Pope Francis during the recent World Meeting of Families, a little skittish.

Because the convention will be held in July, closed schools won’t be an issue. But some of the aspects of the Papal visit like traffic tie-ups, closed streets, truncated SEPTA routes, and other things that kept people from getting to work and business from being conducted are still fresh in the minds of city residents.

While she can’t guarantee that the Secret Service won’t once again close the Ben Franklin Bridge and the Schuylkill Expressway in the name of security, the name in the game for the DNC is to make it as painless as possible for local residents, Daughtry said.

“It’s our desire to have the least amount of disruption possible,” Daughtry said. “While this is a National Security Event, our hope is to have it so the city functions as normally as possible.”

To try and help residents understand what exactly is going on as the convention planning progresses, the DNC will be hosting a series of town hall meetings designed to involve residents in the process, Daughtry said. These meetings will be held in as many of the city’s neighborhoods as possible and will give residents a chance to express their concerns.

Celeb presence will be smaller this year for Dems