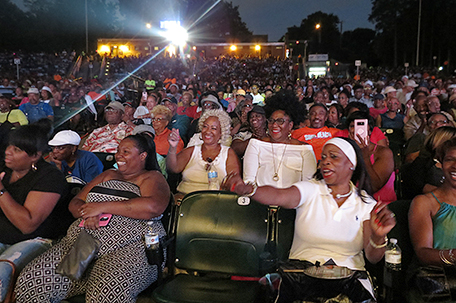 It’s been a long year of instability: COVID-19 restrictions and social distancing requirements closed down The Dell Music Center last summer and silenced the music for fans in Philadelphia and the tri-state area..

Recently the City of Philadelphia held a press conference to officially announce the reopening of the well-loved concert venue, which has a capacity for over 5,284 attendees.

Upon receiving the news that The Dell would be reopening at 100% capacity, the excitement is returning to music lovers who’ve missed the popular venue they call home. The Dell will be ready to welcome back their faithful music lovers and entertainers who will be selected to perform in the four-week concert series lineup.

With the lifting of COVID-19 restrictions  as more people are getting vaccinated, many people are feeling relieved. However, others  are still concerned about those who haven’t gotten vaccinated yet. City officials are hopeful that by August, Philadelphia will have at least 60-70% of its residents vaccinated.

We reached out to the Philadelphia Parks and Recreation Department for information about what protocols will be in place and concerns about the lifted restrictions, but had not received a call-back as of press time. We will follow up with Parks and Recreation at a later date for a comment.

Promoter Bill Ingram of Platinum Productions shared his thoughts on the Dell re-opening and what his first concert would look like post-pandemic.

“You know, like you said, I’m excited to see it open after [the] year or so that it’s been shut down,” he said.”I’m just looking forward to people coming back and [having] a good time. [For]our first show’s possible lineup for Sunday, August 1, we’ll have Jeffrey Osborne [and] Peabo Bryson, and we’re trying to get Regina Belle. And Patty Jackson’s (“Party In The Park”) show will be on Sunday, September 5.

In regards to the August 5 concert lineup, I just try to hope for acts that solidify the lineup,” Ingram said. “We haven’t confirmed any show lineups at this time.”

“I can’t wait, I’m so excited,” Jackson said. “They’re excited — the people of Philadelphia are really excited. We thought they were not going to be able to do it [have a concert series] and they came through and now we’re able to have shows. I was so afraid and I have said, ‘don’t leave us out there now, we got to have something, think about us.’”

“But I’m excited and I don’t care how hot it is,” Jackson continued.  “I say come on, because it’s been a long time. People ask me why I’m so passionate about The Dell — I say, it’s ours. Susan Slawson took it when it was nothing. Now, it’s beautiful there. I so admired what she has done. The Dell is ours and it’s a place where we can fellowship and have something that we love. So, come on out and have a good time because it’s important. Bring it on, because it’s a wonderful place for entertainment.”

Some regulars and season ticket holders also weighed in about  The Dell’s reopening and we received some mixed reaction about the shortened season and some concerns.

“I love it,” said West Philadelphia resident Christine Cain-Smith. “I’m glad they are opening it. [They’re] only gonna have shows in August, but they should open it for July and August. We need all of those summer concerts. We need our summer entertainment. The pandemic is over. Put mask on if you want to go. I’ll wear a mask, people can wear a mask and they should limit the seating.”

“But I don’t have [any] concerns,” she added . “If people are gonna go, I think people are gonna be safe. Because people have gotten their vaccines and I know I got mine. I’m anxious to see who’s gonna be there. I can’t wait.”

“We’re looking forward to the opportunity to go back, because we missed it last year because of things that were beyond our control,” West Philadelphia resident CJ O’Berry said. “So, to hear that it is re-opening is a great deal of excitement and I’m looking forward to it.”

We go every summer,” O’Berry added “I haven’t heard the lineup yet, but my concern is, you know with the virus and everything, what will happen to the seating for season ticket holders? Will I get my same seats? But, I don’t think they’re doing that this year.”

But not everyone shared the same enthusiasm about going back to the Dell.

“I’m not open to the possibility of being around a bunch of people there,” North Philadelphia resident Carlton Corprew said. “I’ve learned a lot during this pandemic and people don’t have respect for one another. I’m not willing to put that [my life] on the table because I don’t want nobody near me, I don’t want nobody touching me and I shouldn’t have to explain that to people. I won’t be coming this year.”

The Dell’s house DJ, DJ Gary O shared his thoughts about returning to The Dell.

“I’m truly excited that we are returning to The Dell Music Center this season,” he said. “It’s gonna be partial, but I’ll take anything right now. Yes, definitely, I’m looking forward to energizing the crowd. They need some uplifting. Everybody needs some uplifting.”

“It’s gonna be seven  shows, actually,” he added. “Just four shows in August and I’m quite sure they’ll have Lady B’s event and Patty’s show and an additional one. The only one that’s in September is [on]Labor Day weekend. Just to see people partying — it’s a beautiful thing.”