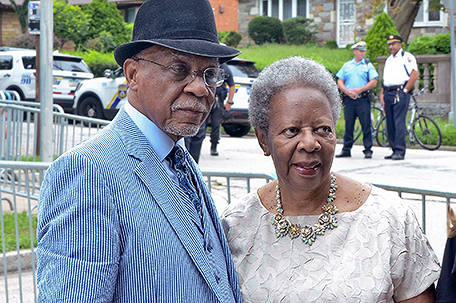 Former Mayor W. Wilson Goode doesn’t want to be remembered solely for the 1985 MOVE bombing. But as long as it continues to be a wound that doesn’t heal in Philadelphia, he’ll have no choice.

By the time that last Friday’s ceremony symbolically naming the 2400 block of North 59th Street W. Wilson Goode Way finally came around, the former mayor had had enough.

In the days leading up to the ceremony, Goode and Councilman Curtis Jones, the man who proposed the commemoration, had been hearing from citizens, many of them residents or former residents of the 6200 block of Osage Avenue.

If that address sounds familiar, that’s the block that was the scene of the May 13, 1985 MOVE confrontation. After residents came to Goode looking for help in their interactions with MOVE, the response was a day-long standoff that ended when the Mayor allowed his Police Commissioner Gregore Sambor, to drop a bomb on the back-to-nature group’s home, killing 11 people, five of them children.

While he won another term in office, Goode’s administration and by extension his legacy, was defined by the bombing.

When protestors disrupted the street naming ceremony by chanting “No Goode Way!” and reminding reminding him of that, his frustration came pouring out.

He turned and addressed the protestors.

“I refuse to be defined by one day in my life!” Goode said. “I have a body of work. I stand by what I’ve done and I deserve this. If the protestors want to work to move things forward in a positive way, I will work with you. I was the mayor then and I accept responsibility for what happened. But you will not define me by one day in my life!”

In response, one of the protestors said, “I don’t know how you can see over here with all the blood!”

Another protestor, Maisha Ongoza, cried as she thought of having to walk past the sign to walk her dog.

“This is going to pain me every time I see it,” she said. “It’s going to torment me. It’s not right that it’s here. I remember that day and I’m still traumatized.”

And it’s that traumatization that will make the events of May 13, 1985 the first line in W. Wilson Goode Sr.’s obituary whether he likes it or not. 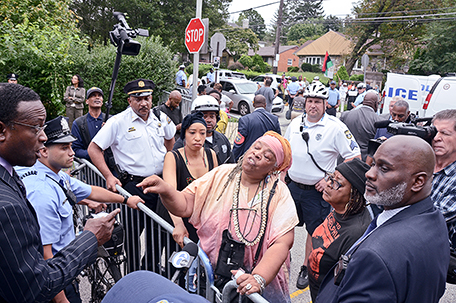 It’s been 33 years since the MOVE bombing, and during that time the wound it caused has only continued to fester. From substandard housing that kept residents from coming back and is now being replaced in a way that denotes gentrification to memories of lost loved ones taken in a way that can only be described as heinous, Philadelphia shows not signs of coming anywhere close to recovering from what happened.

Part of that stems from a lack of acknowledgement on the part of the City’s fathers that this was handled grotesquely. While residents wanted MOVE off of their block, they didn’t expect the eviction notice to come in the form of a bomb that would go on to burn down the entire block.

But the other part of why the MOVE confrontation inspires such anger is because no one, unless you count the residents of Osage Avenue and the organization itself, really paid for what happened.

Under normal circumstances, dropping a bomb on a city block and killing 11 people would at the very least make you have to pay a large sum of money to a bunch of people. But while the city paid nearly $30 million in civil lawsuits, no one was able tried criminally for what happened.

Because of this, a lot of folks think that Sambor and Fire Chief William Richmond, both of whom were sued and made to pay token amounts for the incident, literally got away with murder.

While it’s good that Goode has offered to talk to people about the aftermath of MOVE, it’s probably never going to make anyone forget what happened on May 13, 1985, and his place in it.

So no matter how angry he might get about it, the former Mayor may just have to accept the fact that everyone who comes down W. Wilson Goode Way won’t be thinking about his work with the children of inmates, his work in education, or any of the many good things he’s done since leaving the Mayor’s office.

They’ll be thinking about the fact that they’re driving down a street named for a man who watched an urban block burn to the ground.

Dear Members of City Council and the City:

We are writing now to appeal to the heart of every member of City Council. Honoring former Mayor W. Wilson Goode, I’m sure looks harmless on the surface. Nevertheless, as we hear cries from pain felt by many who cannot separate the honoring one as dishonoring the lives of others, lives lost, mind you, under the Goode administration. The people’s outrage is justifiable, creditable, legitimate and rational.

Certainly, the former Mayor has been honored numerous times since serving as Mayor and each ceremony to my knowledge, went without protest. Why this time? Why now? Because once the former Mayor is lifted by the City he once governed, it devalues the lives of those lost under the government he served over. The members of MOVE that died that horrible day in such a inhumane fashion were citizens of our city and members of the human family.

There is no way to disassociate a chief executive officer of the city from his appointees nor their actions. The Mayor is the face of their administration and unfortunately bears the weight of the actions of that administration. Celebrating the former Mayor at the city level celebrates the scope of his tenure and the administration he shaped. Failure to pull this legislation compounds the problem, further opens the wound and takes from those that died, their worth.

Our appeal is a call for legislation that will reverse what has happened, like civil rights gains rolled back. This will take great courage to right a wrong. Our stand is not against Wilson Goode but a strong stand for John Africa and the MOVE family who are not here to stand for themselves.