The Day Of Reckoning 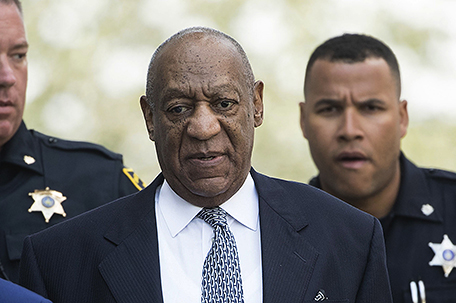 After 34 months, two trials, and a conviction later, comedian Bill Cosby was sentenced to three- to-10 years in Montgomery County Court. But this is far from the final word.

A trial in the summer of 2016 ended in a mistrial and while Constand was the plaintiff in this case, the second trial also featured the testimony of a number of the 60-plus women who had also accused Cosby of sexually assaulting them.

One of those women, model Janice Dickinson, was the source of the laugh.

Cosby was convicted in April on three counts of aggravated indecent assault for drugging and sexually assaulting Constand in the Elkins Park home he shares with his wife Camille in 2004.

After hearing his sentence, Cosby was taken into custody and spent the night at SCI Phoenix, a maximum security facility on the grounds of the old Graterford prison in Collegeville and the newest of Pennsylvania’s correctional facilities. He’ll remain there for medical evaluation and assessment before a final decision is made on his placement.

In addition to the prison time Cosby received, he was also fined $25,000 and ordered to pay the costs of his trial, which is $43,611.83, according to court documents. He will also have to pay a monthly offender supervision fee and must surrender his passport.

Once he is released from prison, Cosby must also register as a sexually violent predator for the rest of his life, meaning that he must register with the state police, and undergo mandatory sex offender counseling with a treatment provider approved by the state. He will also be subject to community notification of his presence in the neighborhood due to his SVP status.

In pronouncing sentence, Judge O’Neill, who is being investigated by Pennsylvania’s Judicial Conduct board due to a complaint filed against him by Camille Cosby charging bias, said that Cosby had no one but himself to blame for the moment in which he found himself.

“It’s been 34 months since this case was brought,” he said. “This was a very serious crime. Mr. Cosby, this has all circled back to you. It is time for justice. The time has come. The day has come.”

Prior to the sentence being announced, Joseph Green, Cosby’s attorney, argued for house arrest and afterward for a continuance of his $1 million bail, citing his client’s age and visual impairment.

The judge said no to both requests.

“This is a serious crime,” Judge O’Neill said. “The nature of the crime indicates that he could be a danger to the community.”

At a press conference following the verdict, Montgomery County District Attorney Kevin Steele praised his legal team, which included prosecutors Kristen Feden and Stewart Ryan, and Constand for her strength and willingness to stick out what he described as “a long journey”.

For decades, Bill Cosby made everyone believe he was America’s Dad. A man with high moral fiber who felt empowered enough to do such things as deliver the so-called “Pound Cake speech”, a speech in which he slammed poor Black families and their children.

With this conviction, designation as a sexually violent predator and arrest, the real Bill Cosby has been exposed, Steele said.

“For decades, the defendant has been able to hide his true self and his nature through his characters,” he said. “People believed that’s who Bill Cosby was. But we knew otherwise.”

Constand didn’t speak to reporters, nor did she speak at a victim’s impact gathering held near the courthouse, but in her victim’s impact statement, she cited the impact that Cosby’s actions had on her.

She also cited the impact that his conviction and arrest will have on herself and others.

“Bill Cosby took my beautiful, healthy young spirit and crushed it,” she said in her statement. “We may never know the full extent of his double life as a serial predator, but his decades-long reign of terror as a serial rapist is over. Instead of looking back, I’m looking forward to looking forward.”

Women’s rights attorney Gloria Allred, who represented several of the women who testified about what Cosby did to them, was happy with the verdict. While he wasn’t made to pay for all of the women he abused, Allred was glad that Cosby would now have to deal with his actions.

“We’re glad that judgment day has finally come for Mr. Cosby,” she said. “Mr. Cosby has shown no remorse and there has been no justice for many of the accusers who were barred by the court by the arbitrary time limits imposed by the statute of limitations. But many of them were brave enough to speak to law enforcement and some of them were chosen to testify as prior bad act witnesses. So we are very proud of those who cooperated with law enforcement and did what they could to have a just result.”

Camille Cosby wasn’t present in the courtroom when the sentence was announced.

But she did issue a statement  via her publicist, Ebonee Benson decrying the verdict and accusing Montgomery County District Attorney Kevin Steele of knowingly using false evidence to convict her husband, laying the basis for an appeal.

“Prosecutors, as administrators of justice, have a responsibility to protect the innocent and are prohibited from offering any evidence that is not true,” the statement said. “We have now learned and will prove that Bill Cosby was denied his right to a fair trial because the DA of Montgomery County, Kevin Steele, used falsified evidence against him.”

The alleged evidence, a tape that Constand’s mother Gianna made of a conversation between her and Cosby, was used in both trials. When asked about the tape at his press conference, Steele seemed unconcerned.

Andrew Wyatt, Cosby’s publicist, made a statement that went several different directions at once. He called the trial and sentencing “the most racist and sexist trial in the history of the United States” and said that his client, whose “Pound Cake” speech angered civil rights activists because it did, among other things, justify police shooting Black men over stolen pound cake, was “one of the greatest civil rights leaders” and “greatest educators of men and boys” in the country over the last 50 years.

This work led to his being targeted by a cabal of White women whose sole mission is to brand Black men as predators, Wyatt said.

And it’s a mission as old as time, he said.

“They persecuted Jesus, and look what happened,” he said. “Not saying Mr. Cosby is Jesus, but we know what this country has done to Black men for centuries. What is going on in Washington today with [Supreme Court nominee Brett] Kavanaugh is part of that sex war that Judge O’Neill, along with his wife, are a part of.”

Cosby’s attorneys are planning an appeal of both the verdict and the sentence.