The Cultural Coach: Don’t get tricked or intimidated into giving away your vote 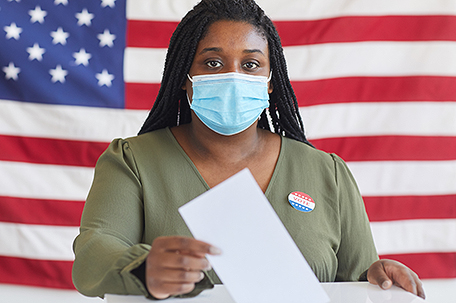 Fearful people are at work trying to undermine our democracy. Unfortunately, I’m not talking about the Chinese and the Russian agents.

I’m referring to the neighbor next door who is so afraid of ending up on the losing side of the Nov. 3 presidential election that he/she/they view scare tactics and dirty tricks as the highest form of patriotism.

In Shelbyville, Tennessee, homeowners with yard signs supporting the Joe Biden-Kamala Harris ticket recently had a visit from a group claiming to be the Ku Klux Klan.

The intruders damaged the Biden-Harris sign and left an ominous warning on a business card: ”You have been paid a social visit by The Knights of The Ku Klux Klan. Don’t make the next visit a business call.”

Now, I’d call that a threat.

Meanwhile, some California Republicans contacted by the Washington Post defended their social media posts directing people to unofficial ballot drop off boxes, arguing that they were simply taking advantage of a state law, passed by the Democrats, regarding ballot harvesting.

State officials in California have since sent a cease-and-desist order to Republican party leaders ordering them to stop collecting mail-in ballots and to furnish the names and contact info for all voters who deposited their ballots in the unauthorized boxes. They also must turn over the ballots to the appropriate election officials.

In California, an individual is permitted to hand over a mail-in ballot to a third-party, who is then authorized to deliver the ballot. In the past, the Democrats have held parties where voters fill out mail-in ballots and leave them with volunteers who return them. Hmm. (If you want to find the official drop off boxes in California, click https://caearlyvoting.sos.ca.gov/.)

As if this ballot drop-off box confusion weren’t upsetting enough, the Federal Bureau of Investigation piled on more alarming news by announcing it uncovered a plot by individuals connected to anti-government militia to abduct Michigan Gov. Gretchen Whitmer. Thirteen people have been charged.

Democrats and Republicans are gathered at a risky intersection – one in which sharp political divisions and dirty tricks are clogging the arteries of democracy. No matter which side we are on, conservative or liberal, it is safe to assume wayward members of our preferred team have engaged in wrongdoing and deception.

If we are going to get through this, citizens need to band together, and insert ourselves in the care of our democracy.

• Rely upon your state’s election site for the most accurate and up-to-date information regarding mail-in ballots, drop off locations and deadlines.

• Throw away all unsolicited voting materials that arrive in the mail. Misinformation is coming at us from every direction.  There are reports of people calling voters to direct them to the wrong polling place. Who can we rely on? Our African American newspapers. They always have been there for us. And, of course, the NAACP Election Protection campaign.

• If you are not voting by absentee ballot, allow yourself plenty of time to vote in person on Nov. 3. Bring water, hand sanitizer, and a snack. Wear a mask. Don’t wear any t-shirts that may intimidate or offend others. You can’t be a champion for a fair election if you do.  By the way, the car service Lyft has announced discounts for those needing a ride to the ballot box drop-off or poll.

• Should you witness or encounter voter intimidation while at the polls, call the Election Protection Hotline at 866-OUR-VOTE (866-687-8683) for  help. Keep this number handy. Share it with family and friends. Election Protection is a national, nonpartisan coalition that seeks  to ensure that all voters have an equal opportunity to vote and have that vote count. The NAACP is a coalition member.

• If you are threatened by someone while at the polls, dial 911. If you see someone else being threatened, dial 911.  You may be able to dial faster and more discreetly than they can. Look out for one another. Some teenagers were beating a youth underneath my front window one night. Before I could dial 911, my neighbor yelled out the window: “The police are on the way.” The beating stopped immediately. That was one smart neighbor.  Let’s use our brains; not our fists.

• Report suspicious activities and acts of intimidation outside polling places to the local election official immediately. Visit USA.gov to find your state or local election office’s website.  You can also contact the U.S. Department of Justice voting rights section  at 1-800-253-3931.

In the year 2020, amid a year of unthinkable challenges, citizens are being called upon to mount a defense of our democracy, we are tired, and many are suffering, but we must ensure this election is fair and free.

Founding father Benjamin Franklin, in his final speech to the Constitutional Convention said, “…when you assemble a number of men to have the advantage of their joint wisdom, you inevitably assemble with those men, all their prejudices, their passions, their errors of opinion, their local interests, and their selfish views.”

His words apply aptly to our situation today. According to historical accounts, Franklin was approached as he left the convention and asked what type of government had been formed. He replied, “A republic, if you can keep it.”

Let it not be said that we were the generation that let that republic slip away.