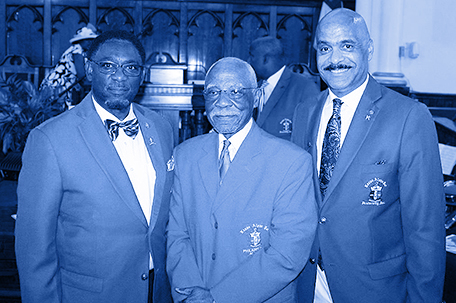 When one first arrived at 3801 Market Street, it was hard to miss the drummers, red carpet and the distinguished gentlemen of the Philadelphia Alumni Chapter of Kappa Alpha Psi®, who stood regally at the entrance to welcome visitors to their opening event.

Philadelphia was about to become crimson and creme for a few days.

Kevin Scott, the Grand Historian of the fraternity, reminded us that Philadelphia is the home of the Kappas’ International Headquarters, and so it was befitting to have their conclave in the city, where they were expecting 10,000 registered delegates from around the world, and another few thousand of the “social delegates”to converge, handle business and experience the city of brotherly love and sisterly affection.

It was something to witness just how many brothers were in the bond for 40 years and more who were still so committed to the fraternity they joined decades ago, and who continue to follow their motto, “Achievement in every field of human endeavor.”

One of those men was Alvin Barrington, who joined the bond at Florida State University in 1976; he is even more committed today, 43 years later, with his beautiful wife Tanya by his side in full support of his efforts.

According to Scott, the fraternity was founded in 1911 by 10 men, led by Elder Watson Diggs, in an effort to find a safe place for them to gather at Indiana University in a time where lynchings were constantly happening and they had no safe spaces to congregate.

The outgoing 33rd Grand Polemarch, Mr. Thomas L Battles Jr., who is from Georgia and served two terms, when asked about what legacy he wished to leave, said that his legacy was to put undergraduates back on college campuses, as the fraternity was at the end of a moratorium, and that he was able to do that successfully.

The Kappas also partnered with St. Jude Children’s Research Hospital, and was one of the leading organizations that raised funds for that worthwhile organization where Richard Lee Snow, a former executive director of the fraternity, played a major role in those efforts.

The organization also has a program called Kappa League, where they partner young teens from 6th-12th grade with adult mentors to help guide and lead them into adulthood.

Kappas raised a million dollars to work with the senior members in the bond and the community. They promote healthy initiatives to remind the brothers that their well-being is paramount.

Lastly, they donated $75,000 to the School District of Philadelphia. Quite an undertaking for a leader who exemplified what it meant to be a “Kappa man.”

At the opening ceremony, Snow gave a warm welcome and immediately set the tone for what was to come.

Seven hundred chapters nationwide, and even more from around the world, got down to business by swearing in a new Polemarch — St Louis native Reuben A. Shelton III, Esq. — gave awards to deserving brothers, and in the midst of their work, found time to tour Philadelphia with their significant others.

Philadelphia literally rolled out the red carpet and earned millions in spending dollars for its time and efforts.

It was indeed a pleasure to have those fine gentlemen here.

84th Annual Grand Chapter Meeting and Conclave of the Kappa Alpha Psi Fraternity Inc. to be held in Philadelphia from July 30-August 4