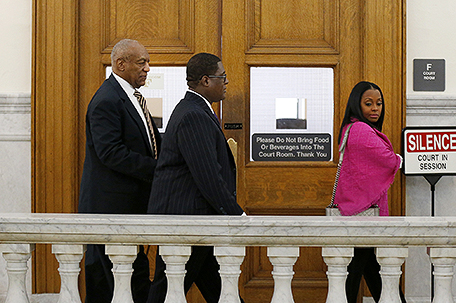 For almost two years, the debate between those who think comedian Bill Cosby is a sexual predator and those who feel he’s an old man wrongly accused has been waged in the “Court of Public Opinion” in earnest.

That debate moved out of that court and into the Courtroom of Montgomery County Judge Steven T. O’Neill as the case of the Commonwealth vs. William H. Cosby began at the Montgomery County Courthouse in Norristown on Monday.

Cosby is charged with committing aggressive indecent sexual assault and related offenses against former Temple University employee Andrea Constand in his Cheltenham Township home in 2004. Should he be convicted on all of the charges, the 79-year-old comedian and creator of the iconic 80s sitcom “The Cosby Show” faces 30 years in jail.

The courtroom has seen a steady stream of media, spectators such as Keisha Knight Pulliam, the actress who portrayed Cosby’s daughter Rudy on “The Cosby Show” and Mary Frances Berry, former chairwoman of the U.S. Commission on Civil Rights.

It was also filled with some of the other women that have accused Cosby of sexually assaulting them.

Among them was Lili Bernard, an artist from Los Angeles who claims that Cosby assaulted her in the 1990s. She was there in support of Constand.

“She is a joy-filled woman,” Bernard said. “She’s speaking out for all of the women and the deep betrayal they felt.”

Constand, the prosecution’s star witness, took the stand on Tuesday afternoon. When her name was announced, a noticeable buzz went through the room as everyone waited to hear the words of a woman who was barred from talking about the incident since settling a 2006 civil suit with Cosby. She spent seven hours on the stand, many of them being cross-examined by Angela Agrusa, Cosby’s attorney.

During direct testimony, Assistant District Attorney Kristen Faden walked Andrea Constand though the incident between her and the man that she at one time viewed as a friend and potential mentor.

While she was director of operations for Temple’s women’s basketball team, Constand met Cosby, a powerful alumnus and longtime trustee at the school. He invited her to his home for dinners and while he had tried to hit on her once or twice during those times, she wasn’t really concerned.

“We developed a friendship,” Constand said. “He was someone I trusted.”

In fact, Constand said, she trusted Cosby so much that when she decided to leave the basketball program to go back to school and become a massage therapist, she went to his house to talk to ask him for advice. The stress of figuring out how to do this was keeping her from sleeping, she said.

While they were talking, Cosby went into the bathroom and came back with three pills. As someone into homeopathic medicine, Constand asked if these pills, which the comedian said would help her relax, were all natural supplements.

When he nodded his head yes, she took the pills with a glass of water.

“I started slurring my words,” Constand said. “I saw two of [Cosby]. I tried to stand up, but my legs weren’t strong and I began to panic. He told me that I probably need to relax and led me to a couch to lie down.”

She had passed out, but was jolted awake by Cosby’s hand groping her breasts, his digital penetration of her sexual organs, and him putting her hand on his penis, Constand said.

“I wasn’t able to push him away,” she said. “I was trying to get my hand and legs to move, but they were frozen. The messages from my brain weren’t getting to them. I wanted it to stop.”

When cross-examined, Agrusa tried to point out inconsistencies in Constand’s statements, especially in terms of phone calls between she and Cosby made after the incident. Feder managed to keep the damage minimal by putting these calls in context.

Phone calls were a big part of the testimony of the next witness, Constand’s mother, Gianna. Gianna had taped phone calls between herself and Bill Cosby that discussed what happened between the comedian and her daughter.

“He betrayed her,” she said. “I was very upset. She had mentioned that she saw him as a mentor and looked at him like a father. I was distraught that he drugged her.”

During cross-examination, Agrusa asked Gianna if she was sure Cosby wasn’t trying to get Andrea to fess up to the consensual nature of their relationship.

She wasn’t buying it.

“At the beginning, he tried to say that there was no drugging and no rape until he realized that he wasn’t going to fool me,” Gianna said. “My daughter didn’t share any details of their physical relationship because there weren’t any.”

The jury, which was picked in Allegheny County because the defense team didn’t think a fair trial would be possibld without that, listened to another woman with a similar story to Constand’s when testimony began on Monday.

That witness, Kelly Johnson, was the former personal assistant for Cosby’s personal appearance at the William Morris Agency in Hollywood, Tom Illius. While he was a tad demanding, Johnson, who now lives in Atlanta, believed that the man who gave us iconic characters like Fat Albert and “The Cosby Show”’s Dr. Heathcliff Huxtable was at his core a good man.

“I had the utmost respect and admiration for him based on what millions of other Americans, especially other African- Americans, thought,” Johnson said.

Johnson couldn’t hold back her tears as she recounted the moment that all changed; the day that she claims Cosby sexually assaulted her.

“He called me and asked me out to lunch at the Bel-Air Hotel to discuss my life and what I wanted to do,” Johnson said. “Instead, he asked me to come to his bungalow. I knocked on the door, and he answered it dressed in a bathrobe and slippers.”

Once she walked in the door, Johnson testified, she sat on a couch and Cosby ordered lunch. He gave her a white pill, she said, something to help her relax. Instead, it made her feel like she “was underwater.”

By the time she came to, Johnson found herself on the bed, and watched in a haze as Cosby allegedly used her hand to pleasure himself.

“I felt like I wanted to say something,” she said, crying.

It was that lack of respect of female autonomy that Faden told the jury to focus on. The bottom line is consent, she said.

“Inability to consent is what this trial is about,” Faden said. “The defendant used his power and his fame to manipulate and incapacitate women for sex. If [Constand] couldn’t resist, she couldn’t consent.”

Faden promised that she and District Attorney Kevin Steele would prove this, with the help of an unsealed deposition Cosby gave as part of Constand’s 2005 lawsuit, which was settled for an undisclosed sum.

When he opened his case, Cosby’s attorney, Brian McMonagle, said the deposition cuts both ways. In addition to admissions on Cosby’s part that included his procurement of the quaaludes and Benadryl he allegedly used to drug women for sex, it also includes a bunch of reasons why his client should be found not guilty.

“Sexual assault is a terrible crime,” McMonagle said. “But so is a false accusation of sexual assault. The Montgomery County District Attorney’s office conducted an exhaustive investigation and found that [Constand] had been untruthful time after time in her statements.”

McMonagle also claimed that Constand’s motive was a financial one, saying she had gotten herself a lawyer who specialized in sexual assault lawsuits, something he also accused Johnson of.

It was that pattern that McMonagle alluded to in his cross-examination of Johnson. She left William Morris in 1996 after the alleged incident with Cosby because he tried, as one of most important clients the talent agency had, to talk her boss into firing her.

She filed from workman’s compensation and McMonagle used notes from a lawyer involved in the case to try and prove that she had past experiences with drugs.

None of this phased Allred, who represents 33 of Cosby’s 60 accusers.

“I’m not surprised,” she said. “It’s the defense’s job to attack the evidence, to attack my client, and even to attack me. It’s par for the course. It’s his job to make his client look like the victim.”

The trial continues on Monday.