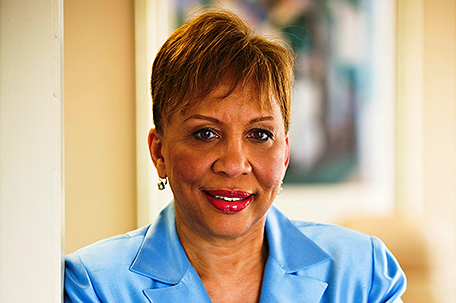 For Evelyn Smalls, President and CEO of United Bank, the path to success for both herself  and the bank has been lined with confidence and an unwillingness to use the word “can’t”.

On Thursday, United Bank of Philadelphia, the city’s only Black-owned and controlled bank, celebrated it’s 25th anniversary of providing community-based banking services for small businesses, churches and customers around the city.

The bank’s anniversary gifts, however, started rolling in on Wednesday night.

On Wednesday night, the Lancaster, Pennsylvania-based Fulton Financial Corporation announced that it had invested capital in United Bancshares, Inc., the parent company of United Bank of Philadelphia.

Fulton made the $675,000 investment in the company because United has shown a commitment to traditionally marginalized neighborhoods through investing in the entrepreneurs that make them viable, officials said.

“Fulton Financial is pleased to support United Bank’s outreach efforts through our company’s Fulton Forward initiative, which focuses on delivering programs and forming partnerships that help build vibrant communities through programs, products and services designed to foster affordable housing, drive economic development and promote education and financial literacy,” said E. Phillip Wenger, Fulton’s chairman, president and CEO. “Our capital investment will enhance United Bank’s ability to serve Philadelphia’s communities and neighborhoods through its commercial banking business, which has a particular focus on, and sensitivity to, groups that have traditionally been underserved, including African-Americans, Hispanics and women.”

After 12 years at the former First Pennsylvania Bank (now Wells Fargo), Smalls was doing community and economic development projects on behalf of local churches and was introduced by her husband, the Rev. Leonard Smalls, to United Bank’s founder, Emma Chappell.

Once she was told of United Bank’s mission, Smalls decided it was where she needed to be.

“It seemed like a good fit,” Smalls said. “The country was founded on community banks and I think that they’re needed. The founders saw the need to ensure that people had access to affordable bank products and services. We see our relationship with our customers as relational more than transactional. We try to get close to our customers so we can understand their needs better.”

Smalls came to Philadelphia after graduating from North Carolina Central University. She was working for the Atlantic Richfield Oil Company at the time and decided she wanted to stay here when the company moved West.

Recently, Smalls was honored by the Philadelphia Community of Leaders for her work in helping underserved communities connect with banking services. In this interview with the SUN, Smalls talks about her career in banking, the importance of community banking, and the importance of self-confidence.

SUN: First of all, Mrs. Smalls, I’d like to thank you for your time. I guess that my first question for you is, how did you get into banking?

ES: Banking was not what I was thinking of doing initially. It wasn’t what I was thinking about doing when I was in college. My oldest sister was a teacher and one of my role models was a teacher. I majored in business, but I had a blending of courses. Atlantic Richfield recruited me out of college, and I since I had wanted to be a psychologist, I worked with an industrial psychologist there. At that time, there was a lot of testing and review of candidates coming into the company.

The company was moving out west and there were a lot of people being relocated. I had just had my daughter, I was on leave and I was considering what I was going to do. Someone told me to contact an organization called Options for Women. I called them, told them that I was on leave and contemplating my future because I wanted to stay here. They suggested that I interview at First Pennsylvania for a job working with the Senior Vice President of Operations and Human Resources. It was an unstructured position, so I could really learn about banking.

SUN: You’ve been a part of United Bank since the early 90s. Can you talk a little bit about the bank’s beginnings and how it’s managed to stay in business despite more than a few changes in the business climate?

ES: [United Bank] was 18 months old when I joined. It’s been significant to me to keep this bank open in this marketplace because we do know how diligently [Emma Chappell] worked to get this going 25 years ago. Over the years, we’ve done what was necessary to keep the bank open. You re-engineer things, make changes, downsize, anything you need to do to keep pace with a changing economy. You have to be nimble and able to adapt.

We’re a community bank, and when community banks start, they set themselves up to do everything. But over time, you start to see your strengths, focus on the things you do well and let go of the things where you might not be as competitive in. Our board and management had some lengthy conversations about strategies and what we should do.

We have a lot of deposit consumers who had never banked with anyone else before. We’re also a business bank, and we work with a lot of small businesses through the SBA 7a program.

SUN: The Philadelphia Community of Leaders recently honored you and United Bank during the organization’s Honoring The Ancestors celebration. This year, the celebration honored the late Rev. Leon Sullivan, the creator of Progress Plaza, where United Bank has a branch. How important was for you to receive that award?

ES: It was extremely important. [Rev. Sullivan] was just such a giant in this city. He was really focused on economic development and was the strength behind the development of Progress Plaza. He was also a mentor to Emma Chappelle so there’s also that connection. When they showed the remembrance video of [Sullivan], I saw how he moved about in difficult times where there was heightened segregation. When I saw him trying to integrate lunch counters, I felt a connection to him because I was doing the same thing in North Carolina. That’s why it was very important to [United Bank] to stay in Progress Plaza when it was remodeled. It was important to us to remain in that community.

What have you learned about Philly as someone who isn’t a native? What’s made it “home” for you?

ES: When I first came here, I didn’t like Philadelphia. I had to focus on not yielding to what I didn’t like. I grew up in a small town and Philadelphia wasn’t quite as friendly, but when I set out to do something, failure is not an option. I had an opportunity to move to Chicago, but I wanted to stay on the East Coast. So I stayed. Because family is important, I wanted to be in a place where it was easy to get back to North Carolina if I needed to.

But you have to make an area work for you, and Philadelphia has been great to me. It’s a great city and I’ve created a lot of long-lasting friendships and relationships here. I’ve met people through various boards and I’m involved in a lot of organizations.

SUN: If you had the chance to talk to a group of young people who are interested in doing what you do, what would you tell them?

ES: I would tell them to be confident and to know themselves. There are always going to be stereotypes of what certain people should be doing and where they should fit. It isn’t always pleasant and people will assume certain things about you, but it’s that inner strength that helps you. Often, young people are told who they are by forces outside of themselves. I’m passionate about my work, so it helps if you have some passion. Remember that you can do anything you set your sights on. Blot out the negative thoughts because they don’t relate to you.

SUN: Again Mrs. Smalls, I thank you for your time. It was great talking with you.

ES: Thank you! It was good talking with you, too.