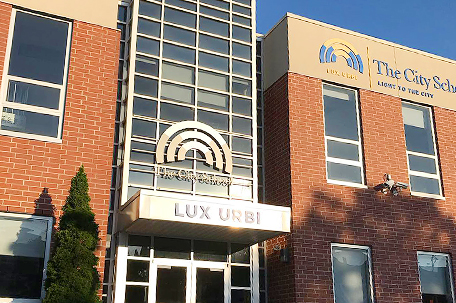 Now in its 40th year, The City School ushered in the 2018-19 academic year with a building dedication of its new Poplar campus,  located at 910 N. 6 th Street. The ceremony was held on September 4, 2018 with prayer and a ribbon cutting ceremony.

“Today we are not focusing primarily on the launch of a remarkable building,” Jake Becker, Head of School said. “Instead, we are praising the Lord and recognizing his good work in our midst. Dr. Liam Goligher, senior pastor of Tenth Presbyterian Church, Rev. Laurence Tom, pastor of The Chinese Christian Church & Center and Dr. Barbara Moses, a founding principal, led the prayer and reading of Psalm 103, which is the school’s theme verse for the upcoming year

Following the brief ceremony, student ambassadors guided attendees through a tour of the school’s 24 classrooms, full gymnasium and cafeteria. The middle school and high school student population is expected to double in size over the next five years to 320 students. This growth is significant for the city as The City School’s college graduation and matriculation rate (64 percent of students either complete or remain enrolled six years after college) is significantly higher than the citywide or school district average.

The City School acquired the 50,000 sq ft facility for $9.075 million last September. It was originally built in 2006 by the former Walter Palmer Leadership Learning Partners Charter School, which ceased operations in 2014.

The City School now serves 380 students. The Poplar campus will serve middle school and high school students in grades 6-12, which had previously operated in several churches.

The school has been a strong demonstration of the positive results that can come from a collaborative neighborhood and faith-based work.

City School is a leading, private Christian school in the city, providing more than $1.5 million in need-based financial aid and attracting an array of families in a racially and socio-economically diverse community. The school is fully accredited by the Middle States Association of Colleges and Schools, and the Association of Christian Schools International.