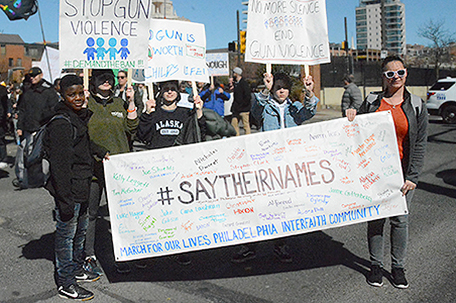 ABOVE PHOTO: March For Our Lives protestors (Photo: Solomon Williams)

Children — and their parents and teachers — took to the streets on Saturday for the March For Our Lives.

– a speaker at the Philadelphia March For Our Lives

Usually, a Saturday outing for Bailey Shade of Sicklerville, New Jersey doesn’t consist of going to a protest march.

But the 14-year-old and her mother were standing in Lombard Circle on Saturday waiting for the local March For Our Lives rally to begin because the issue of gun violence had become something that Bailey was a little incensed about.

Especially since it seems as if she and her classmates were being asked to do a little too much.

“We do the lockdown drills in school,” Bailey said. “I’m a kid and I just want to learn. I don’t want to be concerned about someone coming in and shooting [my classmates and I] up.”

Hundreds of young people, their parents and their teachers marched from Independence Mall to Lombard Circle as part of the march, which was one of hundreds of marches held around the world in solidarity with the March For Our Lives held in Washington, D.C.

The Washington march was organized by a group of students that survived a mass shooting at Marjory Stoneman Douglas High School in Parkland, Florida.

An alumnus of that school, Rebecca Salas, spoke at the Philadelphia rally. Despite still trying to process what happened at her alma mater, she felt she had to be at the rally.

“I wanted to support my school, my community and to advocate for change,” she said.

But gun violence has a different look in the City of Philadelphia, something that William Hite, Superintendent of the School District of Philadelphia pointed out.

While he can protect his students at school through security doors, metal detectors and school police, the game changes when these students leave school, Hite said.

“I want my students to be safe in their neighborhoods,” he said. “That’s what’s most important to me.”

So does Phyllis Gibson, a victim’s rights advocate who lost her son John Day to gun violence in 2010. She was glad to see that young people were looking at this issue with a fresh set of eyes.

“It’s a good thing,” she said. “And it’s long overdue. We need to hear from the young people because they’re the ones that are most affected.”

Those who do nothing on gun control fail our children