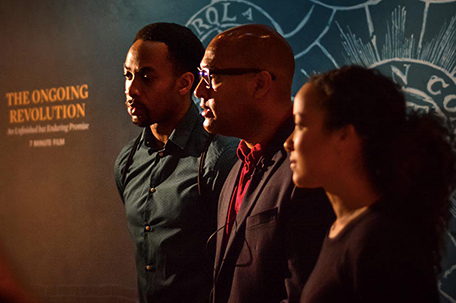 The City of Philadelphia is home to so much of our nation’s history. Philadelphia was once the nation’s capital, is the site for the signing of the Declaration of Independence and the site of the First and Second Continental Congresses.

Although his face is on the $10 bill, many don’t know the impact that Alexander Hamilton had on the foundation of this country. The Museum of the American Revolution honors many of Hamilton’s contributions with their Hamilton exhibit.

The interactive exhibit features over 30 artifacts and highlights the connections between Hamilton and Philadelphia. Three of the cast members of the “Hamilton” Angelica cast took part in the Hamilton tour.

As the son of Nigerian immigrants, Edred Utomi relates to his role as Hamilton in a number of ways. He expressed his gratitude for the opportunity.

In addition to the rewards that come with playing such a multifaceted character, Utomi shared his thoughts on the importance of Black people feeling like they are a part of American history.

“Seeing people of color in the show makes it very much like ‘oh, this is American history’. It’s not like White history is this, Black history is that, Asian history is this… it’s this is the history of America. We as Americans can claim our entire history… “Hamilton” helps to do that… the diverse cast helps to do that,” he explained.  “I’ve had young Black people come up to me and say ‘I never thought of history like it was my own, before seeing you, Josh and all of these people of color’. They are able to reclaim their history.”

In addition to history of the show, the history of Philadelphia also spoke to Utomi.

“It’s crazy because I grew up on the west coast where everything is new… where everything was built 20 minutes ago,” he said with a laugh.  “So, to play a lot of these cities on the East Coast like Boston, D.C and now Philadelphia where a lot of this took place is amazing. The Constitutional Convention ended September 17, 1787. To think that this is where people wrote the documents that we still abide by, that people lived in these houses, that we can walk past… the history of it sets in and feels more real for these lives and people that we’re portraying. To see the domestic stuff, where they lived and worked every day, the cups they used, to see the letters from Martha Washington inviting Eliza and Hamilton to dinner, it’s like these aren’t just characters, they’re real people like us.”

Josh Tower, Philadelphia native and resident historian of the cast, spoke about participating in the tour.

“We did the walking tour to see where the Reynolds affair was, The First National Bank, The Hamilton house when they were here… it’s a great tour and there’s so much in Philadelphia, it’s a special city that way.” Tower said.

In addition to seeing the places where Alexander Hamilton made his mark, Tower did not shy away from asking and learning about the history of Black and Brown people in the Philadelphia area during that time period.

“It’s interesting to see. There are always uncomfortable questions you ask curators because you see all of this European history. Questions like ‘where were the slaves and what happened?’, he pondered. “There was largely a free population here in Philadelphia, even though at some point they may have started off as slaves, they were eventually freed. It’s cool to know some of that stuff, too. To know that one of the wealthiest men in Philadelphia who was a third-generation former slave, went into business and became one of the wealthiest people in Philadelphia at that time. Certain things like that… I didn’t know.”

One of the most popular songs from the “Hamilton” soundtrack is “The Room Where It Happens.” The cast was granted the opportunity to do just that with the tour — be in the places where history happened. Tower spoke about this shared experience with his castmates.

“It’s great going around with Olivia and Edred, because we’re all being surprised together. It’s like we didn’t know that, that’s a real thing, or that’s what he wore, or that’s what they did, or this is where it happened and that’s amazing,” he added, “I actually think this museum (Museum of the American Revolution) has been my favorite part. I want to bring my kids here — there’s so much stuff to do, it’s very interactive so that’s really cool.”

San Diego native Olivia Puckett, who plays dual roles in “Hamilton” as Peggy Schuyler and Maria Reynolds, spoke about the importance of having powerful women and diversity in “Hamilton”.

“It’s an actor’s dream,” Puckett said. “I get to put on two totally different hats. So, the first act I get to play the little sister who is anxious, cautious but also ready to learn and has opinions. Then I’m playing Mariah who is in a horrible situation as a woman back then and is just trying to make her way. She’s caught between these two men who are grossly using money to dangle her… it’s pretty sick, but I found some power in her.”

She added, “Broadway is moving in the right direction as far as diversity, inclusion and representation, but I think “Hamilton” really made a leap forward. It’s rare when us brown and black girls are able to play powerful characters without coming off abrasive or as the funny friend. Not only are these women important, compassionate and there for these men… they’re also smart and have opinions and play a huge part of history.”

Not only has “Hamilton” impacted the shift in modern history, it’s also had an eye-opening impact on Puckett’s appreciation for American history as a whole.

“It’s been really fun. I’m not too knowledgeable of US history… I really wasn’t paying attention in that class in middle school”, Puckett laughed. “But the older I get the more I’m realizing it’s really important. I think tying into why “Hamilton” is important is that it has Black and Brown people portraying these old White guys. It’s really sparked an interest in me.”

Be sure to follow the Angelica cast of “Hamilton” on Instagram at: @edredutomi, @therealjoshtower and @oliviapuckett. Visit: www.amrevmuseum.org to learn more about the interactive Hamilton exhibit at the Museum of the American Revolution.