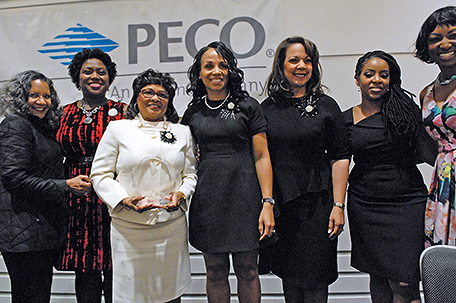 Women who handle their business were honored at the 30th annual Madame CJ Walker Luncheon on Saturday.

According to her biography, Walker had a scalp condition that was causing her to lose her hair, and was looking for a means to stop it. After trying more than a few remedies, she eventually invented—and started to sell—one of her own. To sell her new products, she traveled along the South and Southeast and went door to door.

Eventually, she built a manufacturing plant, and went international with her products. Through her entrepreneurial efforts, she became the nation’s first female millionaire.

That entrepreneurial spirit, and the local women that embody it, were honored on Saturday by the Pennsylvania chapter of the National Coalition of 100 Black Women during the group’s 30th annual Madame CJ Walker Luncheon.

About 700 guests came to the luncheon, which was held at the Lowes Hotel. The awards shine a spotlight on Black female entrepreneurs and their achievements. It also gives the women of the Coalition the chance to help create the next generation of entrepreneurs through scholarships. 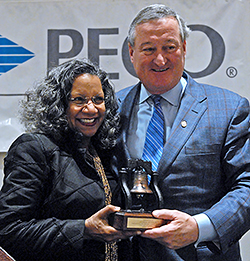 As Mistress of Ceremonies Monique Braxton of NBC-10 pointed out in her introduction, Mayor Jim Kenney attends the luncheon each year. It’s a chance to see the benefits of tenacity, he said.

“[This event] always teaches me something,” Kenney said. “It’s important for me to hear the stories that will inspire other young women.”

The keynote speaker for this year’s event was Baltimore State’s Attorney Marilyn Mosby, the woman who is currently prosecuting the group of police officers involved in the death of Freddie Gray.

Mosby’s address, which didn’t address the Gray case at all, was kind of a call to arms for the women in the audience. 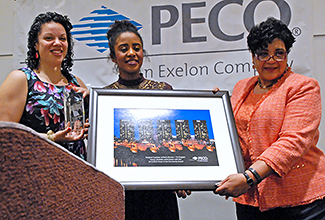 With national, state and local elections coming up, it’s time for women to recognize that the politicians hanging out with them for lunch on Saturday were there for a reason.

“We are the backbones of our communities and our families,” she said. “And when you look at the numbers…we are the ones that will decide the future of public policy and politics, not only at the local and state level, but nationally.”

And the politicians were out in force. Two of the candidates for the Second Congressional District seat—incumbent Congressman Chaka Fattah (who brought his wife Renee Chenault Fattah) and State Rep. Dwight Evans—were there, as were Democratic Attorney General Candidates Stephen Zappala and Josh Shapiro. 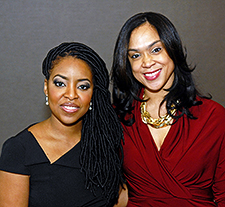 But the centerpiece of the luncheon is the presentation of scholarships, the PECO Power to the Community award and the Madame CJ Walker Award, which goes to a Black, female entrepreneur.

The winner of the PECO Power to the Community Award was Shaleah Lache Sutton, founder of Uniquely You Summit Incorporated, a program designed to empower young, Black women.

In accepting the award, Sutton thanked the Coalition for recognizing her organization and it’s importance.

“Serving Black girls is what I’m supposed to do,” Sutton said. “I make mo apologies for that.”

In honor of the luncheon’s 30th anniversary, the Madame CJ Walker Award was co-presented this year by Walker’s great-great-great granddaughter and official biographer A’lelia Bundles.

She started from the bottom…but now she’s here, Hill-Holiday said.

“I started out cleaning toilets at McDonalds,” she said. “I’m proof that while you may scrub ‘em today, you can own them tomorrow.”

The first and second runners-up for the award were Stephanie Burg-Brown, president and CEO of Metro Diamond Realty and Victoria Tyson, owner and master chef of Victoria’s Kitchen.

While the luncheon is the event that attracts the most attention, it’s part of a day-long event that includes workshops, a marketplace where entrepreneurs can share their products with participants, and opportunities for networking.