The Black butterfly that saved our lives with her own… 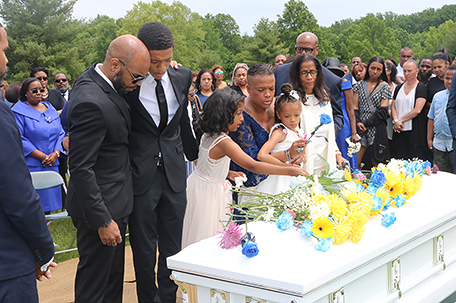 Davida Corinne Godett’s beautiful and inspiring soul left her body on May 13 2019, after facing several adverse health challenges, including a final battle with cancer.

She was so determined, even after being told there was nothing left to do, that she spoke of one last ditch effort to stay alive mere days before she passed away.

She was a Black butterfly that now flies within our souls.

Born May 21, 1975, Davida utilized every ounce of her “dash” by living an exemplary life of love and faith, visible to anyone who came in contact with her. Her smile lit up her eyes, and her warmth was undeniable.

Pushed into the spotlight  after suffering three strokes by her mid-thirties — an experience which would have weakened many — only strengthened her resolve to educate others about their health while managing her own.

Her eldest son Chauncey, along with her two younger daughters, were a lamp unto her feet that lit her heart to the very end, even as she traveled nationally to spread the word about stroke awareness.

At her homegoing service, the father of her girls, Pastor Gerald Clarkson, told the story of how Davida befriended a stranger and ended up hugging a tree with this person to help them feel better.

We all chuckled at the visual.

He also shared that Davida asked him to do her eulogy, and left messages with him for her mother, children and a litany of friends.

Davida was so impactful that her neurologist, Dr. Emil Matresse, spoke at her service and was in tears as he described all the work they had done together and about how impressed he was with her will to thrive, despite adverse circumstances.

Many spoke quietly in the days leading up to her death, just how she saved their lives with her words about being healthy and knowing the family history.

She was and will continue to be impactful, judging by the amount of people who came to say goodbye, and her vision will live on through her sister, Samia, and her mother, Theresa — both beautiful souls in their own right.

Let not your heart be troubled because she is not here – rejoice instead that we were embraced by the light which will never be quenched in our souls.

Obama: ‘Lives have been saved’ by NSA programs

Action on year-old housing audit could have saved Kenyan lives