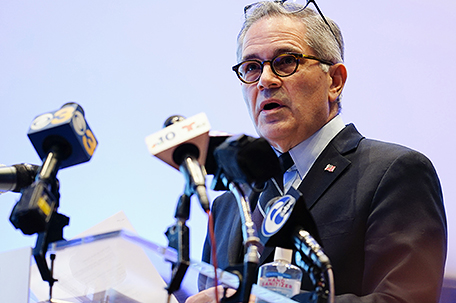 Because of the binary of “reform” vs. “safety,” a quote from Benjamin Franklin has taken center stage in this year’s Democratic Primary race for District Attorney.

Like most, if not all, of America’s founding fathers, Benjamin Franklin was a slave owner and a bit of a rogue.

But that said, Franklin’s ability to see into the future without trying, and the quotes he left us as a result, are pretty useful for whatever situation we as Americans find ourselves in, especially in his native Philadelphia.

At no time has that been more apparent than in this year’s Democratic Primary race for District Attorney. The fight between incumbent DA Larry Krasner and one of the many DAs he fired when he entered the office, Carlos Vega comes down to whether or not you agree with the following Franklin quote:

“Any society that would give up a little liberty to gain a little security will deserve neither and lose both.”

That’s because if you believe the race as it’s being presented, the question that Philadelphians have to ask themselves is what are they willing to allow to solve crime?

(Granted, that’s a false binary. There are a lot of factors to consider when it comes to why people commit crime. But let’s be honest. In a country where our last president encouraged people to drink bleach to kill a virus and where people are, for reasons that make no sense to me, putting gasoline in plastic garbage bags in the name of hoarding, can we really expect nuanced thinking in a local election?)

As you might expect, this race is featuring the kind of nastiness you might expect when a dude who got fired runs against the dude that fired him. Not only has mud been flung, I predict that catapults will be utilized by the time Election Day rolls around.

When Krasner, a prominent defense attorney, managed to beat out six other opponents, most of them former prosecutors, to become DA back in 2017, he came in promising to make the office more progressive by not overcharging people, finding ways to end mass incarceration by creating programs that would solve problems rather than jail people and to make the justice system more just by making sure that everyone, including the Philadelphia Police, is held accountable for their actions.

At a debate sponsored by NBC-10 and KYW Newsradio held last week, Krasner said he stands by his record. They’ve successfully convicted shooters. They’ve made good on such promises as reforming mass incarceration, keeping people off of probation and parole, and not trying young people as adults as much.

But because he beefed up the Conviction Integrity Unit, he’s also helped people who never should have been in jail get out.

That’s one of the bigger differences between him and his opponent, Krasner said, citing the case of Anthony Wright, a man who spent 25 years in jail for a crime he didn’t commit who was released and then retried before finally being exonerated.

“About 20 people have had their wrongful convictions overturned,” Krasner said. “Compare that to my opponent. Compare that to what he did to Anthony Wright when he was a prosecutor and knowing that Mr. Wright was innocent, after DNA had established that, retried him anyway. Words are nice, but actions tell us a lot.”

Vega, however, says that Krasner hasn’t done his job. While there have been more gun arrests, there haven’t been more convictions, he said. There have also been more people killed due to gun violence.

“Mr. Krasner, you have blood on your hands,” Vega said. “The DA’s office has dropped the ball. Their attorneys are not doing their jobs.”

In terms of endorsement, Vega has been endorsed by some of the city’s more police-friendly wards and former Pennsylvania governor, Philadelphia mayor, and District Attorney Ed Rendell, who was Vega’s boss at one time.

Krasner has gotten endorsements from many of the city’s labor unions, several members of Philadelphia City Council including Councilpersons Helen Gym and Jamie Gauthier and criminal justice activist Shaun King, who is coming to campaign for him over the weekend.

But while Vega is the face of the Dump Krasner movement, the wind beneath its wings is John McNesby, the president of Philadelphia’s Fraternal Order of Police. The FOP, and the political action committee Protect Our Police PAC have come together to give Vega much of the money he’s using to run, with $25,200 coming from the police union.

The union has also been running anti-Krasner ads on television and has stationed a Mister Softee ice cream truck outside of the DA’s office on Fridays to illustrate what it considers Krasner’s “softness’ on crime.

This led to a response from Ben Cohen, one of the founders of Ben & Jerry’s Ice Cream and a Krasner supporter.

“To be clear, Mr Softee isn’t even ice cream,” he said. “It is pumped up with a lot of hot air which is somehow frozen in a limp sort of way. It is chock full of artificial ingredients. In short, it’s fake ice cream. Just like the lies that the FOP has been telling about a courageous fighter for true justice and … one of the best DAs in the US.”

(Mr. Softee declined comment on the race itself, choosing instead to state the obvious, which is that everyone likes free ice cream.)

That bit of silliness notwithstanding, it talks about a real problem. Twenty-five people were shot over the Mother’s Day weekend, seven of them fatally. Altogether, there were 14 separate shootings in the city.

At a press conference held on Monday regarding those shootings, police admitted that many of these shootings may be retaliatory.

“Rather than providing us with information that will help us solve these homicides, they decide to take matters into their own hands,” Homicide Capt. Jason Smith said.

During the last debate, which was held on WURD radio on Wednesday, Vega told the audience that this lack of concern on Krasner’s part for the people of color most impacted by this violence motivated him to run.

“I see the numbers of murders that have been happening since he took office,” Vega said. “Just this past year, [there were] 499 murders. As a father, a single dad, and a person of color — we suffer the most. So, I decided to run for office.”

Krasner accused Vega of leaving a lot of things out with that statement.

“In 50 major cities last year, the increase in gun violence was 42%,” Krasner said. “The increase in Philly is 40%, which is terrible, but what is happening is not unique to Philly. The FOP and their candidate — my opponent — are weaponizing a national tragedy.”

Philadelphians get the final word on Tuesday, when the Pennsylvania Primary election takes place.

I wonder what Franklin would say…