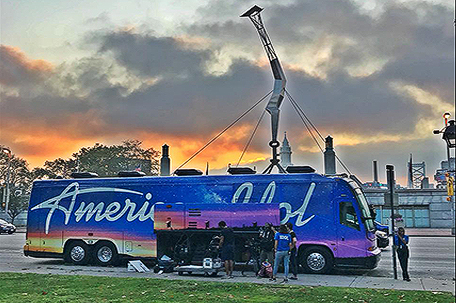 Last Thursday, lines of people gathered in Philadelphia’s Franklin Square for their chance to audition for “American Idol”.

An array of hopefuls decorated the Philadelphia landmark, as producers sat underneath tents intently listening to singers belt their hearts out. Contestants from the ages of 15-28 began lining up early in the morning and were met by sweltering heat. Nerves and excitement could be seen on the faces of the people waiting for what could be the opportunity of a lifetime. That opportunity would come if the singers auditioning impressed the producers enough to get a golden ticket and an invitation to the winner’s circle. Auditionees and their families were eager to talk to the SUN about their experiences.

Philadelphia native Adrienne Cooper 23, stood in line with headphones in her ears preparing to be seen by the producers. When asked about how she felt, Cooper stated, “I look at this as an interview with my best talent instead of labor.”  Nervous faces were visible not only on the faces of the performers waiting to audition, but also on the faces of loved ones, waiting patiently on the sidelines hoping for the best.

Orlando Hurtado, anxiously waited for his sister Daisy Torres to audition. He spoke about how proud he was of his sister for having the courage to audition given all the hardships she has endured. “I feel really happy and proud… I’m very excited for her,” she said. She’s overcome a lot. The fact that our mom died when we were young and now she’s a mother of two and a great mom without having that mother figure says a lot. Daisy has always looked up to me… that’s why I’m just here for her as much as I can be.”

Amanda Ayala traveled three hours from West Chester New York to audition . She sang “House of The Rising Sun” by The Animals, which earned her the coveted golden ticket. “It was definitely a sigh of relief,” Ayala said. “I was working myself up this morning like oh my gosh! I was going to freak out and then finally, once it was over with I was like thank gosh.”

James Jackson of Philadelphia didn’t have to travel far for the audition but he too was able to walk away with a golden ticket. “I actually just made the cut off with the age and I was like let me just do it to see what happens next, and I made it to the winner’s circle,” he said. When I heard myself finally being able to belt out… I was like I got it, I’m good. I’m really confident in my talent and the performance that I gave at the judge’s table. I feel a little relieved. The initial jitters have dwindled but we still have more to do. I’m excited and nervous to see what’s next. I feel good, I feel proud… I love my Philly! Philly has some of the most talented people you’ll ever meet, and I’m very excited to be in that number.”

Hundreds of talented young hopefuls in Philly lined up for a chance to be on American Idol last week.
(Photo: Facebook)

Suki-Liyah, a South New Brunswick native and Philadelphia transplant, also earned a ticket to the winner’s circle after singing Mary J. Blige’s version of “I’m Going Down” and a rendition of Carrie Underwood’s “Cowboy Casanova”. She shared her hopes for the next stage in the competition.

“I’m just looking for a very beautiful experience. I didn’t come here with any expectations. I prayed, I talk to God about it and I just said guide me to where I need to go. Even if it’s just to be in the competition and meet the right people who are going to be a part of my life in the future. My focus is not just winning. If that’s what my path is I want to win… but if I can be around other people that are winning and grab onto that energy that’s what’s most important to me.

One of the things that viewers look forward to most in American Idol are the stories of perseverance. Chester native Colby Swan has auditioned every year since he was 16-years-old and finally got a golden ticket at 28… on the last year of eligibility.

“I cried, I couldn’t believe it. I feel amazing! I’m overwhelmed because I tried, and I tried, and I tried so much, and it finally paid off. I’m feeling really great right now. I am most excited because I feel like I’m one step closer to filling my dreams. Being able to say I did it, even if it wasn’t to go all the way. I made it a step closer, so that’s very exciting.” Swan also shared a few words of encouragement for others on the journey to fulfilling their dreams. “Never give up! Even if it feels like you keep hitting a brick wall… just keep going and knock that wall down.”

Season one runner-up and Doylestown native Justin Guarini, was also on-site interviewing auditionees in line and offering some words of wisdom after going through the process himself. He spoke about the importance of “American Idol” returning to Philadelphia and the talent Philadelphia has to offer.

“It really is a full circle moment for me,” he said. I was in New York when I auditioned in 2002, and the fact that they came here to Philadelphia is huge. I interviewed one of the producers Patrick Lynn, and he said, ‘“We had to come to Philadelphia because Philadelphia has this thing… has this attitude and we have found some really great people here. Four of the top 14 were from this area. So they had to come back and I think it’s awesome that they did. They are absolutely right… we do have that little something, something.”

Justin Guarini also spoke about the “American Idol” auditioning process as a whole and what that experience taught him.

“The process of going through the auditions is really the proving ground for being on the show,” he said. You literally have to be able to withstand the heat without a doubt! The fact that this is one of the hottest days of the year is fitting considering that people have been standing here since 7 am. The fact that you have to stand with other people watching you, in the open, singing for judges and for all to adjudicate… again it’s a proving ground for the show. If you can make it through that, and stand and deliver with passion, purpose and confidence… then I think you’re ready for the next round.”

Guarini also offered sincere appreciation for his experience on American Idol and expressed how that experience changed his life.

“My first feeling is just profound gratitude,” he said. “I was very fortunate to be on the first season with 30 million people… sometimes 50 million people watching. You cannot buy that kind of exposure, you cannot buy that kind of experience. The fact that I’ve been able to take that experience and exposure, and parlay it into six shows on Broadway, films, television, and a national commercial… I get to play [Diet Dr. Pepper character] Lil Sweet and we’re now on our fifth year… I’ve been really fortunate! So I’m just really profoundly grateful, and “American Idol” has taught me so much. The whole experience was the proving ground that I needed to make it through some of the most difficult times in my career and then to shine in what is now one of the greatest times in my career.”

Hopefully we will see some familiar faces of local talent on the next season of  “American Idol.” The show is still holding nationwide auditions. Visit www.americanidol.com for more information on audition locations, eligibility requirements, and additional information about the show. Stay tuned for the release date of the upcoming season on ABC. If the talent present in Franklin Square was any indication of the upcoming season… this is a season you don’t want to miss!