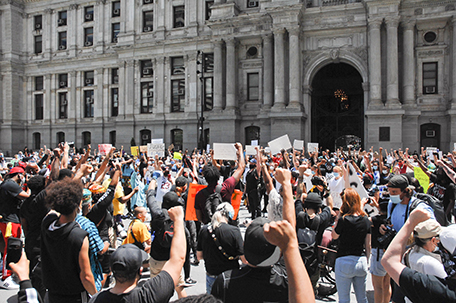 Although it happened in Minneapolis, the murder of George Floyd has hit Philadelphia like 100,000 tons of bricks.

Or at least that’s how Ray Murphy sees it. He’s a businessman who owns several storefronts along the North 22nd street commercial corridor and what he’s seen since marches protesting Floyd’s death devolved into something else entirely adds insult to the injury that these businesses were already dealing with in light of the coronavirus pandemic.

I operated Tommy’s Men Store in the 2900 block of North 22nd Street for 40 years, and I never witnessed anything like what I’ve seen in the last few days,” he said.  “Since George Floyd’s life was drained out of him, looters and troublemakers have torn up the North 22nd Street business corridor and everything around it. It breaks my heart.”

“To see my tenants, all young business owners with great products and services, be devastated like this, it’s just too much,” Murphy continued. “First it was the pandemic that hit hard, now rioting and looting. How much much more can we take?”

Murphy’s sentiments were echoed along Philadelphia’s various business corridors as businessowners tried to pick up the pieces of stores that were victimized by vandals. The five-block North 22nd Street business corridor housed about 95 businesses between W. Lehigh and W. Allegheny Avenues. Sneaker stores, cell phone stores, beauty supply stores and clothing stores were hit and hit hard. A Citizens Bank branch was hit and all of the area’s ATM Machines were stolen.

At the intersections of Broad and Girard and Broad and Erie, looters disguised as protestors left a wave of  destruction. Businesses in West Philadelphia along north and south 52nd Street and at 63rd and Market, were also hit and hit hard.

State Sen. Vincent Hughes did a series of cleanups in his district following the melee. Among the places he went were two of Jeff Brown’s ShopRite Supermarkets that had been looted, one at 52nd and Parkside and the other on Fox Street, which Hughes said had “basically been destroyed.”

Because of the people Brown employed and the services he brought to the neighborhood, the loss of these supermarkets is huge, Hughes said.

“Certainly, I’m concerned about all the businesses in my senatorial district and beyond,” he said, “But, Jeff Brown brought full service supermarkets with pharmacies into neighborhoods that previously had been food deserts for over 30 years. He hired many people from the community, and 40% of his employees are returning citizens. To have his supermarkets so devasted and hit so hard, it is surreal. Despite that, Jeff is still working to help the community. To keep prescription services operating, (particularly for seniors), if seniors were already on file at his ShopRite pharmacies to get prescriptions filled. For those who are able, they can go to the Jeff Brown ShopRite at 6901 Ridge Avenue to get their prescriptions filled. For senior citizens only, who cannot get to the Ridge Avenue location, Jeff Brown is offering delivery service for prescriptions. That’s the kind of commitment he has.”

Meanwhile, Andrea Custis, president and CEO of the Philadelphia Urban League shared that she’s been on some national Zoom conference calls with Urban League leaders from around the nation.

“Last Sunday night with 70 of us on the call, we were updated to everything that was going on with George Floyd’s case, as of May 30th. We also discussed the Breonna Taylor case, which is an absolute mess. Those police shot 20 bullets in her apartment killing her, with two bullets going into the apartment next door where two little girls live. Thank God the girls didn’t get hit. We also got updated on the Ahmaud Arbury case. I get to hear what’s going on with the police and these shooting incidents in all of these areas.”

“Senator Hughes, just like you when you said the words, ‘I am heart broken,’ I too am heart broken, but I am also very angry, like other people we’ve bene talking to,” Custis said during the call. “It’s a good thing I’ve learned to be a big girl and calm down because I come from a different era. I come from the era of H. Rap Brown, Huey Newton, Stokley Carmichael and Angela Davis.  That’s how I grew up.”

“Now that I am a professional and the CEO of the Urban League of Philadelphia, my behavior of past years has calmed down,” she continued. “Nonetheless, I will never be silent and I will always stand up for people, who are in the right and who deserve justice. What we witnessed with George Floyd, that’s called murder and we’ve seen it over and over again, ‘I can’t breathe.’ ”

“On Saturday, May 30, initially there were about 3,000 protestors who marched down Benjamin Franklin Parkway peacefully,” Philadelphia Police Inspector Sekou Kinebrew said. “That was fine. But then certain protestors started becoming disruptive and looting started from there. That became a long night. Almost all of the violence and looting we saw on Saturday, was limited to Center City. We didn’t have disruptions in the neighborhoods.”

“On Sunday, we took measures to lock down Center City. Nobody was allowed in accept essentially workers, and residents,” Kinebrew continued. “While we were downtown working through issues, that’s when the rioting and looting started in the neighborhoods. That’s when we saw 52nd and Market, 52nd and Arch Street, police cars being set on fire, a couple officers injured. The organized protests around by the Police Roundhouse were peaceful. Some of our officers even took a knee in solidarity with peaceful demonstrators. We get it that all protestors are not out trying to do wrong.”