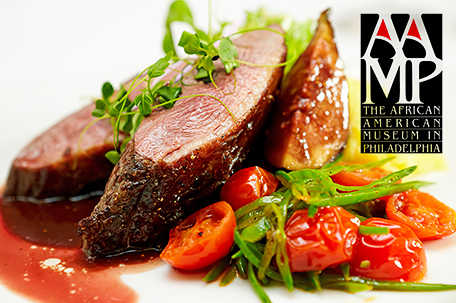 The John S. and James L. Knight Foundation recently announced a $50,000 grant to the African American Museum in Philadelphia (AAMP) in support of “Beyond Sustenance,” a series exploring the connections between African-American agricultural and culinary traditions. AAMP is one of 19 individual artists and arts organizations who received a total of $780,000 from the Knight Arts Challenge, in the name of advancing cultural growth and innovation while engaging the community through the arts. Building upon AAMP’s latest exhibits, Distant Echoes: Black Farmers in America and Syd Carpenter: More Places of Our Own, “Beyond Sustenance” will illuminate ways in which African American agricultural heritage extends far beyond the basic functions of providing food and nourishment.

Among the exciting programming AAMP has in store, is a “Heritage Dinner” in conjunction with First Person Arts and the Dorrance H. Hamilton Center for Culinary Enterprises on Sunday, July 20. This large, family-style meal will call on AAMP’s exhibits as touchstones, prompting guests’ recollections of their own family dinners and other traditional gatherings. The series also includes free, hands-on workshops each month, focusing on intergenerational cooking and gardening. On the menu are workshops inspired by farm to table cooking, vegetable-based plant art, and growing intergenerational connections through agriculture. Finally, AAMP will install an interactive “Talk Back Wall,” allowing visitors to record their impressions of Distant Echoes and More Places of Our Own through words, images, and ruminations. More information/details will be announced shortly.

The Knight Foundation invests in artistic excellence, funding arts projects that engage the Knight resident communities in collective cultural experiences. Building on the success of the three-year Knight Arts Challenge, these grants provide new funding to winners who continue to rise to the challenge of creating innovative programs.

For more information on the African American Museum in Philadelphia and Beyond Sustenance, visit www.aampmuseum.org and follow @aampmuseum on Twitter.