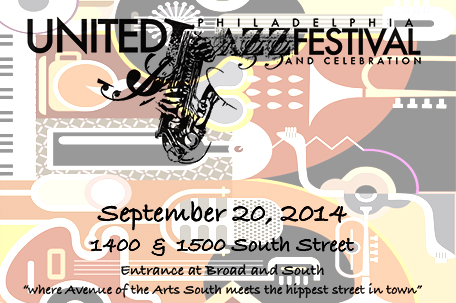 LifeLine Music Coalition, Inc. will host a pre-fest warm up jam and festival announcement on Thursday, August 14th at the PHS Pop Up Garden located at 1438 South Street. The warm up event will be held to promote the second Annual Philadelphia United Jazz Festival which will be held on South Street, between Broad and 16th Street on Saturday, September 20, 2014 from 12 noon to 8 PM. This free festival will feature The Sun Ra Arkestra, The Philadelphia Freedom Jazz Orchestra, and many more renowned artists from the Philadelphia region.

“This festival is a tribute to the great jazz musicians from the Philly area past, present, and future, in particular John Coltrane, whose birthday (September 23, 1926), falls very close to our third weekend in September format,” said Executive Producer Warren Oree. It is also designed to draw attention to one of the most historical and culturally rich corridors in Philly—-South Street! It’s also important to note that festivals stimulate not only culture and social interaction….but also propels the economy, both in the community and citywide.”

In addition to music all day, craft vendors will be selling their unique items. Surprise guests are scheduled throughout the day. The festival is free and open to the entire family.

LifeLine Music Coalition, LLC. (LMC) is dedicated to promoting jazz and the arts in the Philadelphia region. LMC has been producing jazz festivals and concerts since its inception in 2003 and is best known as the music producers for the West Oak Lane Festival which ran for eight years from 2004 to 2011, and featured such artists as:  Teena Marie; The O’Jays; Benny Golson; WAR; Roy Ayers; Dave Sanborn; Chaka Khan; Esperanza Spalding; Christian McBride and many more.