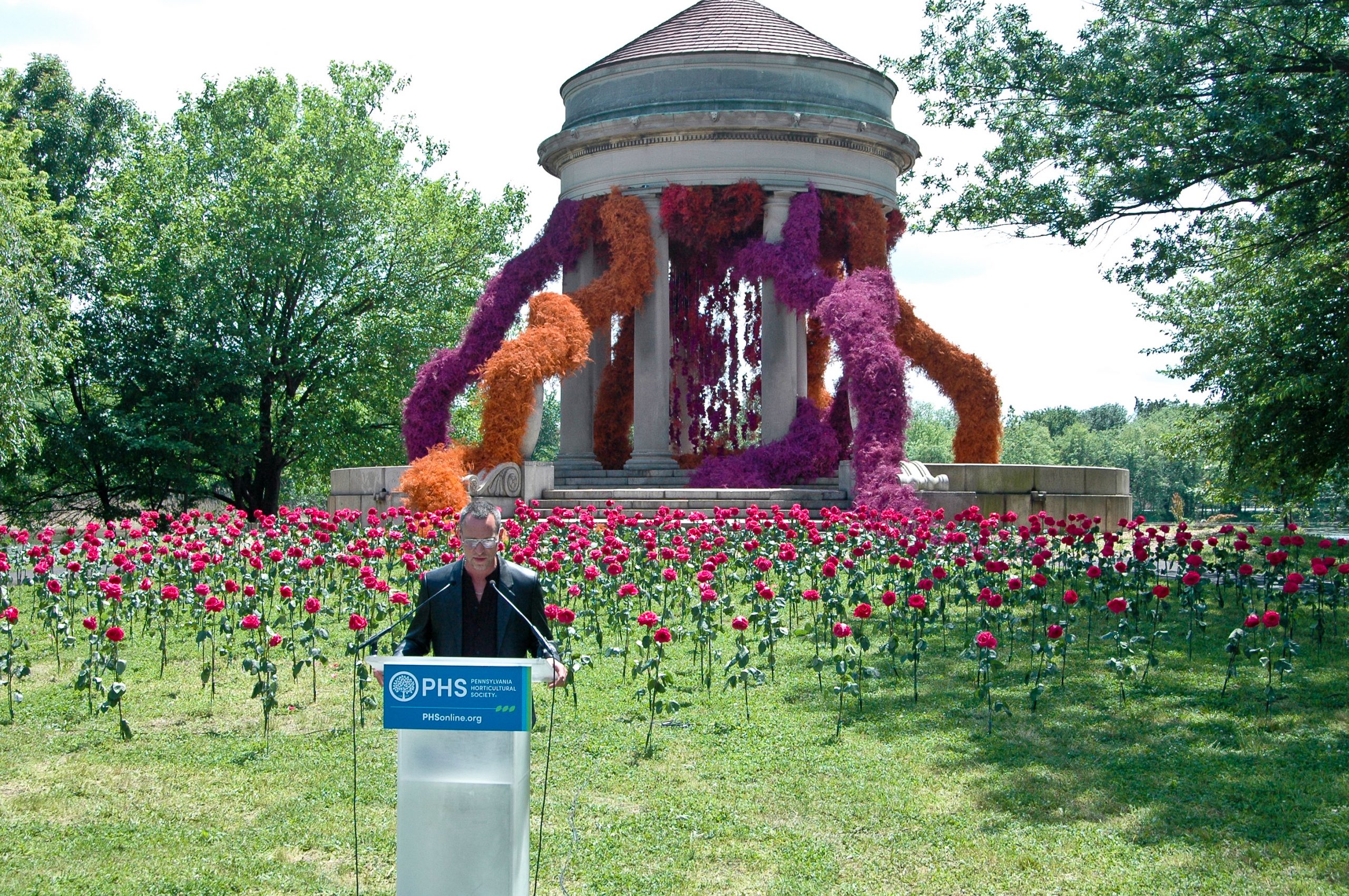 For the first time in its 193-year history, the Pennsylvania Horticultural Society’s world-renowned Philadelphia Flower Show — the nation’s largest, and the world’s longest-running horticultural event — is being held outdoors. The show kicked off at the picturesque FDR Park, located at 1500 Pattison Avenue & South Broad Street in South Philadelphia on Saturday, June 5 and runs through June 13.

Pandemic weary crowds thronged the park despite unseasonably hot weather during the opening days, excited to explore this new interpretation of a longstanding Philadelphia tradition.

The popular annual event — in recent years held at the Pennsylvania Convention Center — has always heralded the arrival of spring and the growing season to the region. Last year’s show ended right before the city and nation went into lockdown due the then-growing COVID-19 pandemic.

Naturally, as with most events of this magnitude, planning occurs at least one year or more in advance. Faced with the uncertainty of how long pandemic restrictions would last, organizers pivoted and decided on an outdoor event.

This change required a shift in focus from early spring to late spring and early summer in order to ensure a stable, frost-free weather pattern, but has also provided a larger creative space to test out new concepts and build upon older ones with an eye toward the future. In many ways, given the show’s main focus, this change was quite natural.

The switch to the 15-acre setting has also allowed the inclusion of over 75 garden and floral installations, the largest number in Flower Show history. The spacious venue has also allowed the show’s food, beverage and vendor footprint to expand in ways that have not been possible in the convention center space.

At a press conference held last Friday prior to opening day at the Olmsted Pavilion — where the striking exhibit, “Habitat,” is located — PHS President Matt Rader spoke about what many people have discovered and embraced about nature as a result of the pandemic.

“Plants are essential for our collective health and well-being, and to life itself,” he said. “This year — the 14-15 months that have just passed — we saw more than ever how critically important nature, gardening and the outdoors are to people’s physical and mental health.”

PHS board chair Robin Potter thanked everyone involved with planning this year’s show — which is the organization’s largest and most visible project — for the hard work, resilience, resourcefulness and creativity that it took to produce this reimagined version in challenging times, and issued a call for people to join PHS and support its many programs throughout the year.

“Whether you’re a gardener or an active family, whether you’re someone who is interested in a clean environment, or someone looking to improve your community, you need to know that PHS has a place for you,” she said.

Jeff Leatham, floral designer and the Four Seasons Hotel Philadelphia’s artistic director, spoke about how life during the pandemic became the inspiration for his exhibit “Habitat,” which greets attendees at the entrance of the show with its vibrant pink, orange and green foliage which incorporates plumosa, orchids and baby’s breath, among other materials.

“What we’ve all been through this last year, being cooped up at home, really inspired me when I had the honor to make this [the Olmstead Pavilion] the backdrop for my paints, and I just really wanted to create something in the idea of the overgrown beauty of nature taking over the sculpture itself,” he said.

At the conclusion of the press conference, designer Wambui Ippolito was presented with the “Best in Show” trophy by Flower Show chair Helen Horsman for her garden exhibit entitled “Etherea,” which was inspired by memories of her childhood in East Africa. The exhibit is an artistic interpretation of the moorlands where humanity began. Evocative and peaceful, its muted tones and symmetry speaks volumes and emphasizes the sheer power of simplicity.

This was Ippolito’s first entry in the Flower Show. To win the much-coveted award left her both astonished and humbled. She explained her exhibit design, which also gave a nod to the past year’s lockdown experience, where people spent more time at home and became attuned to their immediate environment.

“I designed it for pets and humans, and I think that you can replicate this in your own homes, create beds and spaces for all the people and beings that live within your house,” she said. “I’m thankful to PHS — I did not expect this.”

For more information about this year’s show, which runs through June 13, and to purchase tickets, visit: www.phsonline.org/the-flower-show .