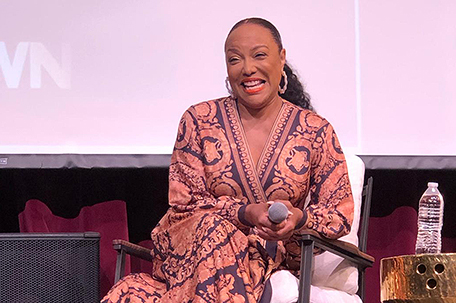 ABOVE PHOTO: Lynn Whitfield laughs during the discussion.

The island was teeming with filmmakers hoping to snag awards for their work and attendees who were excited to see what was playing on screens large and small.

For many of the attendees, it is a yearly must-do event, and they were noticeable as they  provided guidance to those who were visiting for the first time.

The film festival was broken into several categories and blocked times.

You could almost see the nervousness oozing from the less-seasoned filmmakers who were hoping to make an impact with the audience.

Many of them did.

The first filmmaker interviewed was Jamal Hodge from the Bronx in New York City.

He got into art after being homeless, placed into the foster family system for some time and running with gangs.

He became interested in filmmaking, which landed him in Siberia, where he created a piece called “African Americans in Russia.”

That project took him to the Sundance Festival, which led to winning awards for his craft.

He wanted to keep telling stories and used film as a tool to help kids in schools speak to their wounds.

He was invited to  this year’s African American Film Festival for his piece entitled “A Happy Divorce.”

It was riveting, and revolves around the choices couples are forced to make,  including suicide.

Watching the attendees respond to his short film is a clear indicator that he knows how to capture his audiences.

The point of Hodge’s movie is to showcase that you are not the worst thing you have ever done, and that everyone deserves redemption on some level.

On August 8, attendees had the pleasure of seeing not only the season premiere of OWN’s hit series “Greenleaf,” but were graced with three of the lead actresses — Lynn Whitfield, who stars as Lady Mae, Merle Dandridge , who stars as Grace, and the “baby sister”, portrayed by Deborah Joy Winans.

The discussion after the premiere episode aired was moderated by. Michael Eric Dyson, and he left the audience completely entertained.

In a short interview at the end, Winans spoke of being a granddaughter in the famous Winans family, how her faith led her to being on the cast, and her gratitude for being able to work with Oprah Winfrey, who tells cast and crew that “love is in the details.”

Winans also confessed that although she was thoroughly trained in her craft through years of schooling, she was completely nervous sitting among the all-star cast. But they took her under their wings and she has since learned so much from them.

Winans’ advice for those who wanted to be an actor was this — work hard, be ready when the doors are opened, understand that God’s timing is not our own, and while it is good to have faith, the work must accompany it.

It is Winans’ hope that this television series will continue to address the issues within the church while entertaining those who watch it faithfully.

Other celebrity appearances included actor Michael B. Jordan, who chatted about the new movie based on author and civil rights lawyer Bryan Stevenson’s journey, and the movie about football player Brian Banks, who was wrongfully imprisoned for rape for 6 years.

Between the movie screenings, we were introduced to Kelli Richardson-Lawson, founder of the Joy Collective — a Black-owned firm in Washington D.C.

Richardson-Lawson made us aware of the Crown Coalition, co-founded by the Dove Brand, the Urban League Coalition and the Color of Change, plus 37 other organizations.

Their goal is to drive tangible change in the Black community for those who are being profiled and targeted for wearing their natural hair in the workplace.

With the exception of New York and California, it is perfectly legal to discriminate in places of employment because of natural hairstyles worn in the US.

The Joy Collective brought it to the forefront at the festival by asking attendees to sign petitions that would help to support their work, create policy changes on behalf of Black people and make it illegal to discriminate based on their hair choices in its natural state.

Aside from the film festival, visiting popular sites such as Inkwell Beach and sampling the freshest of fare are truly bucket list items to experience!