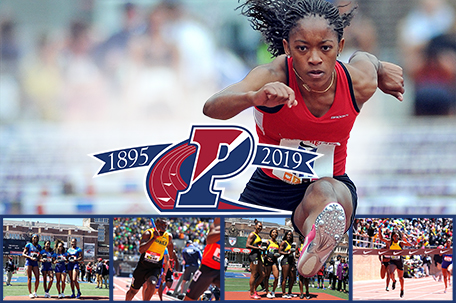 It is 4 a.m. in the still and cold morning, and nothing is moving on the University of Pennsylvania’s campus, except for one corner, where people have already parked their cars, put on aprons, washed their hands, and began what would be the beginning of three long and adventure-filled days.

That place on the one corner of Franklin Field — home of the 125th annual Penn Relays — is the massive organization of “Team Jamaica Bickle” – a group of steadfast volunteers that have spent the last 25 years hosting athletes from Jamaica, the Bahamas, Trinidad and Tobago, Guyana, Belize, Barbados, Grenada, St. Vincent, and the Grenadines.

The word “bickle” is a loose translation of the word “food”, and judging from the boiling pots, warm ovens, and sounds of people chopping and dicing what is needed for the day, these volunteers take it seriously. Almost 2,000 meals were served daily during the relays.

Founded by Irwine Claire, Sr. OD (Order of Distinction) in an effort to host and prepare nutritional meals that the athletes would have enjoyed at home on their islands, his initial small and ambitious plan has morphed into a village that includes volunteer nurses from New Jersey and physical therapists from Canada, ensures that the athletes have housing, transportation to and from their hotels, and food from home throughout the time they’re here for the event.

The air is crackling with energy, and the volunteers arrive with a positive vibe that is hard to describe.

Every year, the athletes and coaches are given whatever they require to be comfortable and the volunteers are rewarded with countless medals that are won during the races and brought back to the TJB village.

On this beautifully sunny but blustery Saturday morning, Franklin Field began hosting the third and final day of the Penn Relays.

The excitement is palpable –people are walking in with clear plastic bags filled with a sundry of items, season ticket holders greet each other like family, and they all settle in for a long day.

All around the circumference of the field, one group of fans dominates the scene — the Jamaicans — and they are just as loud and proud as they are colorful, if a bit chilled in the temperamental April weather.

This makes for a fusion of delightfulness in an all-out effort to keep warm, as long as the dominant colors are peeking from somewhere!

Flags are ready and voices are tuned up. The American fans are often amused by these spectators, while a tad bit in awe of the sheer speed of the athletes from this tiny island close to the equator.

While the Jamaicans won quite a few races, the two that held everyone’s attention were the men and womens 4X4 relays – USA against the world.

Breaths were held when the men set up to run. There was a false start, so the anxiety levels rose, but when they left those kickstands, it became clear by the 3rd leg that the United States men would dominate and take the title for 2019.

Not feeling a bit deterred, the air once again began buzzing with the fans, as a slender woman by the name of Shelly-Ann Fraser-Pryce, affectionately known as the “Pocket Rocket” in Jamaica, strolled to the starting gate with what seemed like nary a care in the world, even as the stadium erupted at the mere sight of her.

Fraser-Pryce stretched, maintained her focus and twisted her neck from side to side, as she prepared to start the  first leg of what would become a race that left people screaming until they cried, Jamaican flags blowing in every direction and the entire field vibrating with joy, when Jamaica claimed the title for the women in 2019.

Team Jamaica Bickle’s volunteers watched with honor and pride as the founders Irwine Claire, Sr. OD, Blaine Stoddart and the key sponsor, Dr. Vincent Hosang, O.J.,(Order of Jamaica), were honored on the field and presented gold watches for a stellar 25 years of serving the community, and bringing untold millions to the Philadelphia economy.

This organization has been so instrumental, that the Jamaican flag is allowed to permanently fly with dignity on Franklin Field, which an honor and a rarity.

While it can be difficult to keep people volunteering consistently, many that volunteer for this group have been around since its inception 25 years ago, which is a testament to the mission and goals being met year after year.

Jamaica has a national coat of arms which states, “Out of Many, ONE People,” and Team Jamaica Bickle is a shining example of what can be done on behalf of service to others and not self. A hearty congratulations to them all!