Tavis Smiley brings “Death of A King: A Live Theatrical Experience” to the Merriam Theater 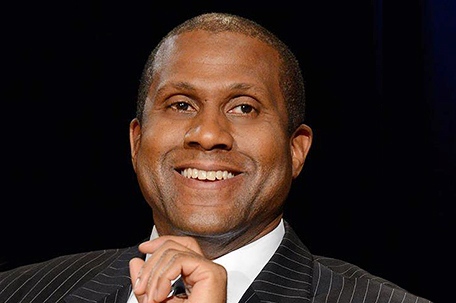 Multimedia powerhouse Tavis Smiley has navigated various aspects of the entertainment industry seamlessly throughout his career.  He continues to be transformative, while balancing a career as a radio commentator, television host, and author. His New York Times best-selling novel “Death of A King: The Real Story of Dr. Martin Luther King Jr.’s Final Year” has inspired yet another venture.

Smiley, in collaboration with Tony Award-winning Broadway and film director Kenny Leon and world-renowned jazz pianist Marcus Roberts, brings the last year of King’s life to the stage. The multi-media production– entitled “Death of A King: A Live Theatrical Experience”– will travel on a 40-city tour in 2018, which includes a performance at the Kimmel Center’s Merriam Theater in Philadelphia. Smiley spoke intently about the catalyst for this project, and what he hopes to achieve in revealing aspects of King’s life very few people know.

Like most successful people, Smiley credits a large part of his accomplishments to his vision and his team.

“I have been amazed over the years at the stuff that I’ve been able to do.” Smiley said. “It helps when you have vision. I have a vision for what I want to do with my life… I’m just trying to live that vision out. It’s really about compartmentalization to say…I focus on what I’m doing at that time; organization…I believe in structure, and I have a really good team of people to help me pull these things off. I mean there’s no way in the world that I could do all these things I do, without a great team.”

Smiley’s focused vision, and knack for informing the masses, eventually led to a subject that was near and dear to him…the Rev. Dr. Martin Luther King Jr.

“I regard Dr. King as the greatest American we have ever produced, that’s my assessment!” Smiley said, “I say that in part, because King fundamentally changed the direction of this country. He changed the future of this country and the only weapon that he ever used was love; not a bullet, not guns, not bombs, not airplanes, and not tanks. He was able to convince, people through his words, through his deeds and through the power of love that America had to change direction.”

“I’ve studied King since I was a 12-year-old kid, so a few years ago when I wrote this book, “Death of A King,” it was a story that I wanted to share that most Americans don’t know,”Smiley continued. “This occasion of the 50th Anniversary of his assassination, which is April 4th, 2018, gives us another opportunity, another entry point, to try to get to the complexity of his character… the complexity of his humanity, to really peel back the layers if you will, of who Dr. King really was. What were the conditions that made him the target that he was? This commemoration 50 years later, gives us a chance to really start to answer those questions.”

Smiley has dedicated his career to delving into the truth, and the resolution of unanswered questions by presenting the facts. The facts as they pertain to the life of King, are often minimized to reflect only a few iconic moments. Unfortunately, many fail to see the full scope of who King was.

“What’s always troubled me is that we seem to have frozen King in a frame at The March on Washington in 1963, so that all we know about King is this March on Washington speech,’ he said. “I think that some people think that King only gave one speech in his whole life called “I Have A Dream”, [with a laugh] and not much else is known about him.”

“King dies too soon, he’s killed at the age of 39… but he does live five years after The March on Washington,” Smiley continued. “It’s fascinating when people start to get a glimpse of the fact that Martin at the end of his life, is not the same Martin they know from 1963.”

In recent news, the Trump administration under the guise of revealing information about the assassination of JFK, released once sealed FBI reports about King. The non-coincidental timing of that release, which was on the cusp of the 50th anniversary of King’s death, sought to do one thing… tarnish his legacy.

When asked about his thoughts on the matter, Smiley stated, “I say all the time, Martin was a public servant, he was not a perfect servant! Nobody is trying to act like he was perfect, but the lies, innuendos, and the stain they keep trying to put on his legacy, has to be met with some force. So with this story, it doesn’t try to make him a saint. We’re telling what Martin had to endure and it raises a few questions people are going to be fascinated by.”

“People will be equally fascinated by what they will discover about the last year of Dr. King’s life in “Death of A King: A Live Theatrical Experience,” Smiley said, “This book –“Death of A King”– and this stage presentation tell the story of his last year. The last year is critical, because in the last year of his life, Martin[’s] experience is something that he’s never experienced, and that is… because he came out against the war in Vietnam practically everybody and everything turns against him.”

Now all these years later, everybody acknowledges that the Vietnam War was the worst mistake that America ever made, but at the time King was standing alone. He’s disinvited by LBJ [President Lyndon B. Johnson] to the White House, they won’t publish his book, they won’t run his op-eds in newspapers, they disinvite him to preach at Black churches, the NAACP and The Urban League turn against him. Black folks and White folks turned against him. He can’t raise any money because they won’t let him give any speeches. He ends up dying broke and Harry Belafonte, his dear friend, had to pay for his funeral. Now you say that to most Americans, and they’re like “What are you talking about?”

In addition to learning a great deal about King’s last year of life, “Death of A King: A Live Theatrical Experience” provides the audience with an incredible aesthetic.

“It’s wildly entertaining in that I’m the narrator on stage, and Marcus Roberts is the jazz master sitting at the piano. He’s written 14 original compositions for this entire presentation that include jazz, blues, gospel and classical, Smiley said. “The real killer part is that you’ve got three 12 x 12 massive screens. You’re blown away by what you see on these screens; we found some never before seen photos, we have some lost footage. “

“The story that we tell of that last year is arresting, wildly entertaining and empowering,” Smiley continued. “These three screens are in constant motion with words, pictures, images, and B-roll footage. What it does, is it challenges you to ask yourself sitting in the audience two questions. The first question is an individual one–‘How do you stand in your truth when everybody is turning against you?’ The second broader question is,‘What happens to a society that ignores its truth tellers?’

“Death of A King: A Live Theatrical Experience”, is sure to captivate audiences nationwide. In addition to the stage production that will run January through April 2018, Smiley will produce a television event with J.J. Abrams and Warner Bros. The series is to be released in the fall of 2018. Smiley will also be releasing his new book, “Leading by Listening” in the fall. In the book, he will share what he’s learned about being a generous listener. He will also continue to host his weekly radio and TV shows “The Tavis Smiley Show” on Public Broadcast International and “Tavis Smiley” on PBS.

“Death of A King: A Live Theatrical Experience” premieres at The Merriam Theater on Friday, February 2, 2018 at 7PM for one-night only. Tickets are available at www.kimmelcenter.org. For additional information, visit www.DeathOfAKingTour.com.

Tavis Smiley– In an introspective mood