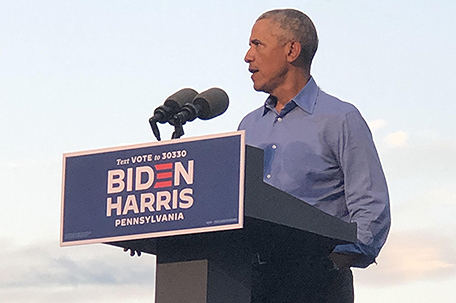 Due the coronavirus pandemic, the parking lot at Citizens Bank Park, usually the site for tailgate parties prior to Philadelphia Eagles and Phillies games, has been empty and forlorn looking of late.

But on Wednesday, hundreds of cars filled the lot for a tailgate party to cheer on voters instead of athletes. With 13 days left until the Nov, 3 election, former President Barack Obama came to Philadelphia to ask the city that helped him win Pennsylvania twice when he ran to help his former vice president — and Pennsylvania native, Joe Biden — reclaim the state.

Hundreds of cars decorated with signs and flags in support of Biden and his running mate, Sen. Kamala Harris, crowded into Lot S and greeted Obama with honking horns of support.

That said, the continuing coronavirus pandemic required a little extra thought when making the trip, said Jannie Lau of Radnor.

“We planned like this was the trip of the year,” said Lau, who was there with her friends Lisa Borowski and Taryn Ferst, both of Radnor, and Vanessa Coke Cohen of Bala Cynwyd.

“We’re in the middle of a pandemic,” Borowski said, “So it was important to be safe.”

Seeing Obama was like seeing an old friend who reminded many of them of a simpler time, and that he was campaigning for another old friend in Biden was a bonus.

“Biden and Harris are top notch people,” said Minetta Metz of Germantown. “They’re going to be for all people.”

“[President] Donald Trump is so awful,” said Shannon Chase of Lower Providence. “For the last four years, my children have had no one that they could look up to. With Joe Biden, they’ll have someone to look up to.”

The fact that people are concerned about the message the Trump has sent to America’s children over the last four years was among the things that caused Obama to let the man who followed him into the Oval Office have it with both barrels, highlighting the myriad of missteps he believed the current president had made throughout the last four years.

While he understood that Trump probably wouldn’t follow the policies he put in place, Obama thought that by this time he would understand that America needs leadership and act accordingly. He hasn’t. And the fact that the COVID-19 pandemic, which has killed more than 213,000 Americans and infected 8 million found its way into the White House and not only hit Trump himself, but also First Lady Melania Trump and the couple’s son Barron, is proof.

“This is not a reality show. This is reality,” Obama said. “And the rest of us have had to live with the consequences of him proving himself incapable of taking the job seriously.

Eight months into this pandemic, cases are rising again across this country. Donald Trump isn’t suddenly going to protect all of us. He can’t even take the basic steps to protect himself.”

As someone who continues to inaccurately call the coronavirus the “China virus,” blames the country for the virus’s world-wide reach, and likes to accuse Biden — and by extension, Obama — of being too soft on the Chinese government, the New York Times report revealing Trump’s financial dealings in China — dealings that include a secret bank account — struck the former president as odd. Especially since it was something that no other president, especially him, would never have gotten away with.

“How is that possible?” Obama asked. “Can you imagine if I had a secret Chinese bank account when I was running for re-election? Fox News would have been a little concerned about that. They would have called me Beijing Barry.”

But just like in 2016, Americans in general, and Pennsylvanians in particular, have an alternative, Obama said. And because four more years of an erratic president with a prevarication problem could cause irreparable damage to the country, Biden and Harris are needed and needed now, Obama said.

“The good news is, now you can choose change,” he said. “Right now, you can vote for my friend Joe Biden and his running mate Kamala Harris as the president and vice president of the United States.”

“For eight years, Joe was the last one in the room when I faced a big decision,” Obama continued. “He made me a better president. And he’s got the character and experience to make us a better country.”

Describing the duo as empathetic and principled, Obama said Biden and Harris will make things easier for Americans by having and implementing the kinds of plans such as the Build Back Better economic plan and the Lift Every Voice plan, which focuses on equity for Black Americans, that will make things better for all Americas.

And it’ll be information you can trust because, well, it’ll be true.

“Our democracy isn’t going to work if the people who are supposed to be running it lie every day and just make stuff up,” Obama said. “Making stuff up doesn’t make people’s lives better. You have to have a plan and put in the work.”

You might also be able to turn on your television set without wincing.

“With Joe and Kamala at the helm, you’re not going to have to think about the crazy they’ve said every day,” Obama said. “And that’s worth a lot. You’re not going to have to argue about them every day. You might be able to have Thanksgiving dinner without an argument. You won’t have to worry that the president is retweeting a conspiracy theory about secret cabals or that the Navy SEALS didn’t actually kill Osama Bin Laden.”

But to put Biden in office, Pennsylvanians have to vote. In 2016, the polls had Hillary Clinton winning the presidency and people took the day off.

“I don’t care about the polls,” Obama said. “We’ve got to out-hustle the other side. We can’t leave any doubt.”

Obama’s visit to Philadelphia began with a roundtable of Black male voters at the Hank Gathers Recreation Center in North Philadelphia. He also stopped by a Biden-Harris campaign office and talked with people there.