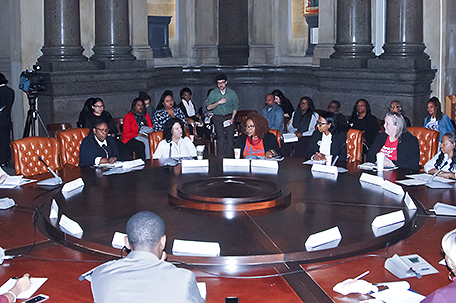 On Thursday, survivors of gun violence —- those who lost loved ones, and those who survived —- came to City Council chambers to share their stories, and demand better.

By When we talk about the victims of gun violence in Philadelphia, we usually begin and end our discussion with the people whose victimization is obvious — the dead.

But there’s another group of people —- the loved ones of those lost to gun violence, the people living in the neighborhoods where it occurs, the witnesses who want to do the right thing, but are afraid of losing their lives in the process, and the people who survive being shot and are forever impacted  —- who need attention as well.

“I share a neighborhood with the family of the person who murdered my son,” said Felicia Pendleton, founder of Mother’s United By Angels. “I went to school with the shooter’s mother. I have to walk past their house to go see my mother. Every homicide leaves behind families and loved ones that will never be the same. Co-victims need access to a variety of interventions that aren’t currently available.”

Pendelton was just one of the gun violence prevention activists who appeared in front of the Special Committee on Gun Violence last Thursday to share how survivors of gun violence navigate their new realities and what the City of Philadelphia could do to make things a little less traumatic.

For Councilmember Kenyatta Johnson, the chair of the committee, the subject is personal. In 1999, he lost a relative to gun violence.

“You never get over it,” he said. “It still has an impact on my family years later. It never goes away.”

Joined by his colleagues Councilmember Curtis Jones, Dorothy Johnson-Speight, founder of Mothers In Charge, Aleida Garcia, President of the National Homicide Justice Alliance, and Anthony Murphy, executive director of Town Watch Integrated Services, Johnson listened to testimony from all sides of the gun violence debate at the day-long hearing, which was in response to the city having 356 homicides in 2019.

This marked the first time that many would hear new Philadelphia Police Commissioner Danielle Outlaw speak about gun violence issues. While she was entering her third week on the job, she gave some insight into what she expected from PPD officers when it came to crime victims.

“The Philadelphia Police Department firmly believes that all victims of crime and their families deserve to be treated with dignity, respect courtesy and sensitivity and has taken steps to ensure that these individuals and their families receive the services they deserve,” she said.

Commissioner Outlaw might have had some questions of her officers after hearing Stanley Crawford’s testimony.

Crawford’s 35-year-old son William was murdered in the city’s Rhawnhurst section a little over a year ago, a murder that remains unsolved. He was on his way to visit his sister and nephew when he was shot, and, Crawford said, the neighborhood isn’t cooperating with police officers.

And the officers are well aware of this, he said.

“I don’t know who killed him, and the detective investigating the case told the neighbors that the family wasn’t cooperating, so they should be careful, because it will happen again,” Crawford said. “I will not give up the fight until my son’s murder is solved. If you’ve got a son, love him. Victims have to advocate for our loved ones because no one is going to do it better than you.’

The final panel was a group of young men whose lives were permanently changed due to gun violence. They were men whose gunshot wounds left them paralyzed. Tyrone Shoemaker, Jaleel Frazier, and Jaleel King testified with Victoria Wylie of the Donte’ Wylie Foundation, which was named for her brother who was killed by gun violence. She facilitates a workshop for people whose gunshot wounds have left them disabled.

They all told stories about the challenges they have faced trying to negotiate a city with broken sidewalks, houses with no handicapped accessibility either in the house itself or outside of the house.

Negotiating the system to get things like an ADA accessible house or work that won’t impact their ability to have healthcare is far from easy. We have to remember that when we talk about gun violence.

“I have seen some things change,” said King, who was shot by a neighbor when he was 8 years-old. “But we have a long way to go. We’re talking about violence, but not the people left behind. Some of them have done everything right, but still can’t get things together. I’m doing well considering, but I could be doing better.”

The thing that stood out to him after listening to the testimony was just how hard it was for co-victims to access the systems they need to put their lives back together, Councilmember Johnson said. How to fix that is something that the committee will be talking about in the coming days.