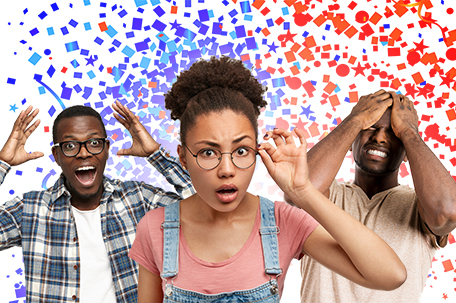 While much of election night in Philadelphia was formalizing the results of the May Primary, Working Families Party candidate Kendra Brooks shocked the world in the City Council At-Large race.

Working Families In, Republicans Out, they said.

On Tuesday, the duo managed to accomplish half of that mission when Brooks became the first third-party candidate to win one of the minority party seats, defeating Republican Al Taubenberger. The other Republican at-large incumbent, David Oh, managed to keep his seat, besting O’Roarke and his Republican challengers: Dan Tinney, Bill Heeney and Matt Wolfe among others.

At a raucous Election Night celebration at Barbers Hall in North Philadelphia, Brooks and her supporters were jubilant about what they had just managed to accomplish.

“They said we couldn’t do it,” Brooks continued, “but we have shown them that we are bigger than them and that this is our moment.”

What made this year’s Council At-Large race one to watch was the number of independent and third-party candidates running for the offices. In addition to Brooks and O’Rourke, Sherrie Cohen, Maj Toure, Clarc King, Joe Cox, Steve Cherniavasky and write-in candidate Charlie Hill participated in the City Council at-large race either as third-party or independent candidates.

But the Working Families Party candidacies were the most concerning to the Democratic Committee. At an annual gathering at the Famous Fourth Street Deli in South Philadelphia, Micah Mahjoubian, policy director for Democratic State Sen. Sharif Street was wearing a “Vote Straight Democrat” button.

He felt it was a necessary message for people to get because gatherings of people with similar values, or political parties, are going to be important as the 2020 Elections approach, he said. By having a pair of candidates say, as Brooks and O’Roarke said during their campaign, that Democratic voters should vote for them and then those on their ticket, could have unintended consequences, Mahjoubian said.

“We need to keep what happened in 2016 from happening,” he said, referring to the part third parties are assumed to have played in the Donald Trump’s presidential win. “The money that the Working Families Party spent to get rid of these two Republicans who don’t ever stop anything would have been better spent turning purple districts blue or red districts blue. Also, we have judges on the ballot. If  Democrats vote for the Working Families candidates, and don’t go back to the judges, we are going to have real Republicans elected that will do real harm to Philadelphians.”

“I don’t think the math for that works,” he said. “There are seven Democrats for every Republican here in Philadelphia. These people represent the more progressive wing of the Democratic Party. They should have been supporting them and doing this 20 years ago.”

Thomas and Gilmore-Richardson, Council’s first two millennials, will help bring down the median age of one of the nation’s oldest legislative bodies.

Helping them in that mission will be Jamie Gauthier, who officially became the new Councilwoman for the Third District. Gauthier defeated Jannie Blackwell for the seat in the May Primary, and will be the first person not named Blackwell to hold that seat in more than 40 years.

All of the District Council people up for re-election —- Mark Squilla, Kenyatta Johnson, Curtis Jones, Maria Quinones-Sanchez, Cindy Bass, Cherelle Parker, and Republican Brian O’Neill —- retained their seats. Councilman Bobby Henon also won, despite having a federal indictment that will likely go to trial in the new year.

There’s a new Sheriff in town now that Rochelle Bilal has been officially elected to the post. She replaces outgoing Sheriff Jewell Williams, who she defeated in the May primary when he couldn’t overcome a cloud of sexual harassment charges hanging over his head.

Tracy Gordon becomes the new Register of Wills. She defeated longtime officeholder Ronald Donatucci in the May primary to win the seat.

And Omar Sabir joins Lisa Deeley and Al Schmidt as a City Commissioner, thanks to his win on Tuesday.

In what was a surprise to no one, Mayor Jim Kenney won a second term in the city’s highest office, defeating Republican Billy Ciancagilini in an election where Kenney refused to even acknowledge his opponent’s existence.

Several judicial races were also decided on Tuesday. Democrat Daniel McCaffrey and Republican Megan McCarthy King were elected to the State Superior Court. They will join Justices Anne Lazarus and Judy Olson, who won their retention bids on Tuesday.