SUPRA Office Solutions, a minority-owned firm, is now one of the City’s fastest growing businesses 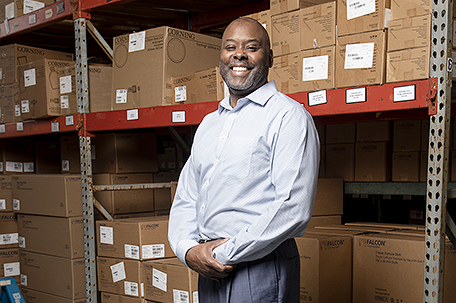 Business executive Ken Carter was about to enroll in Goldman Sachs 10,000 Small Businesses – Greater Philadelphia when he and his partners at SUPRA Office Solutions Inc. had an idea that was both exhilarating and scary.

What if the West Philadelphia office products company turned traditional mergers and acquisitions upside down — meaning that SUPRA, the smaller business, would acquire a bigger one?

Carter, a graduate of the Minority Business Executive Program at Dartmouth University’s Tuck School of Business, thought it made sense for SUPRA, an office supply and furniture company, to buy EMSCO Scientific Enterprises Inc., a medical equipment business.

But during the classes, which are conducted at Community College of Philadelphia, he had to prove the deal’s worth to his instructors, classmates and ultimately, to himself.

“The most outstanding thing was the financial analysis of the deal,” said Carter, who is president and chief operating officer of Supra. He and his partners, Lin Thomas, chief executive; Derrick Suswell, chief financial officer; and Ismail A. Shahid, executive vice president of governmental affairs are all accountants.

Carter said the program, which is an ongoing investment designed to help entrepreneurs create jobs and economic opportunity by providing access to education, capital and business support services, added to his accounting expertise by teaching him “specific tools that helped me hone in on the specific analysis of the deal in terms of profitability.”

The analysis confirmed Carter’s instincts and, shortly after Carter graduated from 10,000 Small Businesses – Greater Philadelphia in 2014, SUPRA acquired EMSCO. The 2015 deal nearly tripled SUPRA’s revenues, now $20 million. SUPRA, which had eight employees, now has 22.  Carter and the management team’s skills propelled SUPRA to the top of the prestigious Philadelphia 100 list, ranking first in 2016 and fourth in 2017. The list, which ranks the fastest growing privately-held companies in Philadelphia, is one of the most sought-after awards in the region, as local media publish and widely promote the rankings.

Goldman Sachs 10,000 Small Businesses  -Greater Philadelphia is investing in the City, by helping its rising group of job creators. Since the program began at the College in 2013, 428 business owners have benefited, with 27 in the most recent group which graduated last spring.

“You have to get outside of your business to learn things about your business. What attracted me to the program was that Goldman Sachs really targets your growth plan, and that was especially important to our management team,” Carter said.

Sudden growth, while gratifying, can be perilous for a small business if the growth isn’t sustainable, said Maura Shenker, director of Temple University’s Small Business Center. “You have to pull in outside expertise,” she said. “A bad decision can break your business.”

SUPRA bought EMSCO because some of SUPRA’s office customers were scientific laboratories, so it made sense to supply them with both file cabinets and beakers.  Carter’s 10,000 Small Businesses instructors offered advice on how to integrate the two companies.

Next is a $10 million ground up construction project for SUPRA’s new Parkside headquarters which will accommodate a warehouse for “downpacking,” which is repackaging supplies for easier inventory, and a new business — cyropreservation, the cold-storage preservation of cells. Carter is also reaching out to the Parkside neighborhood, adding public space for community gatherings and events.

Meanwhile, other business owners who were part of Carter’s 10,000 Small Businesses cohort are working together, at times partnering on projects and buying goods from each other.  SUPRA buys promotional material from Andrew D. Magnus, owner of BTC Envelopes and Printing LLC., and certified public accountant Anita T. Connor, of Anita T. Connor and Associates, handled audits.  SUPRA outfitted a building for Around the Clock Home Health Care Services, owned by cohort graduate Theresa Williams.

Goldman Sachs 10,000 Small Businesses “was a great experience for me and worth the investment of my time,” Carter said. “I learned a great deal about sustaining my business and planning for growth. It was game changer for me.”

Applications are accepted on a rolling basis at Community College of Philadelphia. The program is open to business owners from across the Greater Philadelphia region. Learn more at http://www.ccp.edu/10KSB and www.10ksbapply.com.