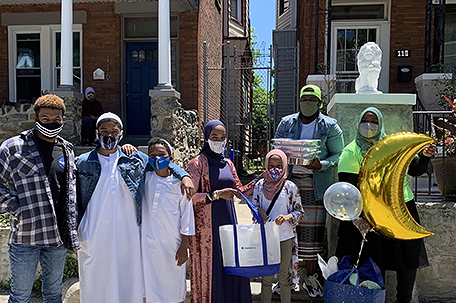 This week’s Philadelphia Sunday Sun Spotlight features two upstanding members of our community who are keeping the spirit of Ramadan during the global crisis, civil uprisings, and COVID-19. Social distancing has not deterred or dampened the spirits of Salima Suswell and Salim Wilson. Suswell is the executive director of the Philadelphia Eid in the Park Festival and president of the Philadelphia Ramadan and Eid Fund. She’s often partnered with Wilson, who is the administrator of Masjidullah Center for Human Excellence to provide food, information about voting registration, and other essential resources.

“Celebrating Ramadan in quarantine can feel lonely for some,” said Suswell. “Although grand celebrations were cancelled, charity and prayer went on,” she continued.

Eid- al- Fitr is celebrated by Muslims worldwide. It marks the end of the month long dawn-to-sunset fasting of Ramadan.

“During the month of Ramadan, charity is one of the fundamentals that we honor annually,” Suswell said. “We weren’t able to gather in the community or at the masjid and in the park for Eid, as we did last year due to COVID-19, I felt like we had to redirect the way we serve.”.

Suswell organized distributions of fresh produce,halal meats and meals, in addition to 100 Eid on Wheels meals and gift bags full of goodies as part of her Eid al- Fitr celebration giveaway.

“Our inaugural Philly Eid in the Park Festival [in 2019] had over 15,000 community members who gathered on June 4 for Eid-al- Fitr,” she said. “The community and our organization was looking forward to having the event produced again.”

“However, based upon the statewide mandate to stay at home, we had to quickly come up with an alternative experience for families while they were protected in their homes,”  Suswell continued. “So we created the Meals on Wheels and Eid Family Fun program which in essence, brought festivities to homes.”

One hundred families were selected using an online registration process.

“It was very nice to be able to announce the winners in the last week of Ramadan,” Suswell said. “Folks were so happy, they felt like they won the lottery.”

Families enjoyed a nice dinner courtesy of the Philadelphia Ramadan and Eid Fund and its partners. Their gift bags included fun games, Islamic books and decorations.

“It was a pleasure to do these acts of kindness,” Suswell added. “It’s a needed time and so many scary things are happening in the world.”

The Philadelphia Ramadan and Eid Fund is a nonprofit organization independent of any masjid.

“We often support the work of the masjids and offer sponsorships and partnerships, which allows them to benefit from the work that we do,” Suswell explained. “There are so many Muslims who are unmosqued.”

According to Suswell, many Muslims don’t affiliate with any one mosque.

“So we like to create experiences and opportunities for Muslims to be united and together to fellowship and to worship together in a way that is meaningful and supported by our faith,” she said.

Wilson manages programming at the Masjidullah Center for Human Excellence.

“Salima Suswell is a valued member of our community,” he said. “She’s a sister of mine. We’ve done a couple of things together, one being feeding people through her program with the Eid committee.”

Her Eid organization partnered with Masjidullah to give out 300 boxes of food weeks ago and there are some other big things we are working on moving forward.”

Masjidullah has 22 core committees that do community outreach.

On Monday and Tuesdays of each week, volunteers deliver food to homebound seniors and individuals on the last Saturdays of each month.

“We have a vanguard committee which we call the elders,” Wilson said. “They are the brothers of the masjid who help out and jump in when we have programming that needs volunteers. They assist my office and the business manager with operations that need to be carried out if we fall short of volunteers. We have the community service committee and the Jewels of Islam, an older group of sisters that meet every Tuesday.”

The Jewels of Islam programming focuses on health and quranic readings. The group also consists of a consortium of religions.

“We have some jewel members who are Jewish and some Christian members,”  Wilson said. “The masjid considers itself as a community partner.In Islam  it’s upon us to be good neighbors and that is what we are trying to do. We are taking our masjid out into the community.”

“We want them to know who we are and what we stand for,” he continued. “There are misconceptions about masjids. People don’t want to come into the masjids because they don’t know what’s going on in the masjid.  Now we are trying to take what we do and the things we have to offer out to the community to get them to see what we do and how we can help.”

Suswell shared that things can become overwhelming at times.

“Saturday as we were out, the protest was going on, and I was getting text messages  and notifications on social media,” she said. “I said to myself, ‘no, I don’t want to look, because I want to stay in this moment and really continue the spirit of peace which is promoted in my religion of Islam and definitely something that is emphasized upon during Ramadan.’ “

“One mother cried when she opened up an envelope [included in her Eid gift] which was a  voucher donated by Jeff Brown, who owns Brown’s ShopRite,” she added.

It made me sad to learn that on the same day we were distributing those vouchers, that kind man donated to the community through my organization, that the community members in need couldn’t benefit from that and shop at those stores [over the weekend],” Suswell said.

Suswell hopes that peace will be restored and our communities strengthened.

“I’m living in the spirit of Ramadan and the truth of my faith. I’m trying to seek peace,” she said.

When Wilson was asked about what motivates him , he replied that it was his  faith in God.

“Another thing that keeps me motivated is our volunteers and the fact that our people need our help,”  Wilson said.“They need to see that it is people of the same color helping each other. I grew up in North Philly, where there was a lot of struggling and things going on that I never could fully understand, but as I got older I understood that we as a people, after we get educated, we’re not supposed to just leave the hood. We’re supposed to come back and educate one another on how we can make our community better.”.

“I strongly believe that when you put the work in, doing the work of God, he’ll be sufficient enough for you to make sure that work continues,” he concluded.