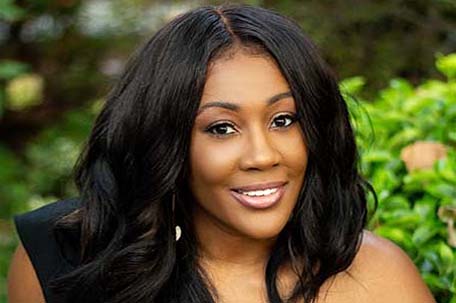 This week we’re  spotlighting  Nykidra “Nyki” Robinson, CEO and Founder of Black Girls Vote and the woman behind, Party at the Mailbox.

Party at the Mailbox is a celebration of democracy in a box and a booming movement trending in major cities like Baltimore, Detroit, and our very own city of brotherly love and sisterly affection.

The organization plans to personally deliver over 5,000 party boxes to Philadelphia residents.

With no strings attached, each recipient will receive a free party box full of Philly swag; Tastykakes, Peanut Chews, balloons, and banners, plus a customized t-shirt designed by a Temple University student.

However, the most pertinent takeaway is the voter information and education piece.

“A year ago today Party at the Mailbox wasn’t even a thing. Eight months ago it wasn’t a thing. It is something that we came up with, [but] like many organizations we had to pivot because of COVID-19”, said Robinson.

“Particularly for us, an organization that is committed to engaging, educating, and empowering voters. Specifically Black voters in our community we thought, what can we do? [in a pandemic],” she continued.

Robinson founded Black Girls Vote in 2015 on the anniversary of Shirley Chisholm’s birth date.  Just as Chisholm, the first Black woman elected to the United States Congress, did, Robinson seeks to bring change through advocacy, outreach, and building strength in numbers — reflecting the core purpose of Black Girls Vote.

“In 2018, we participated in a national initiative in Baltimore called Party at the Polls,” said Robinson. “We learned that those people who had parties at their polls tend to see an increase in voter turnout. So for me, I’m like hey, people can’t party at the polls now because of COVID, but people are voting by mail,” she continued.

As a non-partisan voter education and voter activation initiative, the campaign is aimed at ensuring residents are informed, prepared, and excited to cast their ballots in the 2020 elections.

“Whether you are receiving your ballot or sending it back we wanted to create a celebratory atmosphere because we know COVID-19 has been tough for a lot of families”, said Robinson.

“It hit a lot of people and has caused a lot of sadness, depression, and isolation, so we wanted to create something very special.  We are sending something customized, something of quality, and something nice for voters and even non voters to uplift their spirits and also to celebrate our democracy,” said Robinson.

While arming the community with the necessary resources and tools to vote, Robinson said “there is so much at stake during this upcoming election and voting should not be a chore it should be a celebration.”

“Just having the right to vote, that’s so cool,” said Robinson. “And more importantly we want to give people information because there is a lot of misinformation and disinformation going around.”

Robinson partnered with several organizations including She Can Win, which is one of Philadelphia’s largest nonpartisan organizations that promote women in civic leadership, to activate Party at the Mailbox in Philadelphia.

“I met Jasmine Sessoms, founder and CEO of She Can Win soon after I launched Black Girls Vote. We just connected and we kept in contact through social media, when she saw the Baltimore activation, it was trending on social media,  she said we need to bring this to Philly,” said Robinson.

Party at the Mailbox and She Can Win also teamed up with Unity in the Community, the National Coalition of 100 Black Women- PA Chapter, and the Urban League of Philadelphia to expand voter participation and turnout.

“She Can Win is proud to partner with Black Girls Vote on Party at the Mailbox,” stated Sessoms, in a press release. “In these uncertain times, this initiative fosters

community, brings awareness to one of the most important elections of our time, but most importantly, educates the community about voting. You have to vote like your life depends on it because it does,” said Sessoms.

“Pennsylvania will be really critical in this election,” said Robinson. “We also know that Pennsylvania saw a decrease in voter turnout particularly in our community.

“38,000 Black folks in Philly didn’t vote in 2016,” said Robinson. “So I think that it is totally important that organizations such as Black Girls Vote, She Can Win, and as we’ve grown our partnership with the National Conference on Citizenship, to come and bring something great, something dynamic to and something fun to the city of Philly,” she said.

In addition to bringing a fun voter engagement party to Philadelphia, Robinson shared that some of her other goals is to build trust and assist with manifesting true transformation in our communities.

“Before even considering coming to Philly I wanted to meet with some community organizations,” said Robinson. “I know when you go into a community and the folks don’t know you, people are going to be like who are you?, where did you come from? and there is the trust factor,” she said.

“There is definitely some building of community,” said Robinson.

In terms of transformation Robinson believes education is the key.

“First and foremost I think education is so critical,” she said. “We know that if you don’t have the right information so many times we are misled. “So I think transformation starts with educating our community.”

“That’s how you begin to transform families, when folks are educated then they are able to get sustainable jobs and not just minimum wage. When we talk about Black women transformation we need access to quality healthcare.”

Robinson also shared that gaining access to capital and having technical assistance are major factors as it relates to transforming communities as well.

With a historic presidential election approaching and in hopes of returning to Philly, Party at the Mailbox is working to educate and empower community members to channel their collective voices at the polls.

It’s a celebration for everyone no matter who you are or who you vote for.

“[Ultimately] we want folks to feel the energy that has been put into each box and be excited about going to the polls,” said Robinson.

“Party at the Mailbox is a community movement. We have thousands and thousands of boxes we will be sending out so we don’t only want people to get the boxes, but we need them to post them on social media and show us your boxes, and show that you like your box,” said Robinson.

“It’s not a box, it’s an experience and we want you to share it with your families,” she said.

Under Armour went above and beyond to ship 10,000 masks to be included in the party boxes for each participating city.

Before it is too late, register to get your free Philly Party at the Mailbox box at www.partyatthemailbox.com