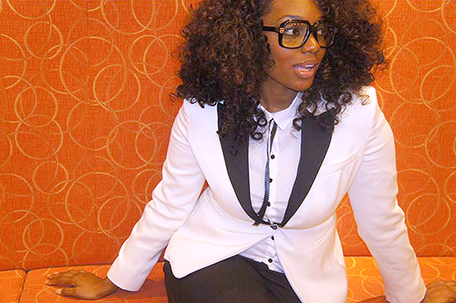 Star is a phenomenal businesswoman, creative writer, and designer who says that “pivot” is one of her favorite words.

She is one part of the husband and wife duo behind The Black Pack, a company that creates premium playing cards designed with unique and vivid images that speak to Black culture.

Perfect for families looking to spend quality time together especially during quarantine, The Black Pack playing cards have become the highlight of Black game night.

Star’s creativity and spunk has caught the attention of many Black culture influencers. With her creative vision, The Black Pack has produced customized cards for Magic Johnson, collaborated with BET and was ultimately presented with the opportunity to expand its business during a pandemic, in partnership with actor and comedian, Martin Lawrence.

“Our company first partnered with Lawrence on a customized playing deck that features Martin characters like Jerome, Sheneneh, and Dragonfly Jones as card faces in each suit,” Natalie Star said. “It was such an honor and a blessing to be able to turn [Martin], one of the favorite TV shows of our time, into a card deck.”

With several exciting creations hitting the market this year, Star stepped into new territory while introducing herself to the world last week during her new product launch and dance party hosted by the National Urban League.

“We received such an overwhelming demand for the brand that we knew we had to extend this partnership [with Lawrence],” she said.

After much success with the “Martin” playing cards, The Black Pack partnered with Martin Lawrence again to create the official “Martin” sitcom trivia game, to include four games in one.

The game was released on September 28.

Now gamers have the option to test their wits on an iconic ‘90s sitcom.

According to Star, she’s “pivoted in a few new directions and is seeking to leave her fingerprints in new industries.”

“Natalie had such a creative vision for the playing cards, that when she presented me with the idea of an official trivia game, it was a no brainer,” Lawrence said in a press release about the game. “It’s been important to me to support female driven businesses, so I am happy to partner with this innovative and creative woman on our second endeavor together.”

Clearly, Star has been playing her hand right. The Black Pack is one of multiple successful businesses she’s jumpstarted.

Their apparel brands, KING and Shock the World, have been seen on the likes of A-list entertainers and athletes, and have been worn by thousands of people across the globe.

“It all started with an idea I had one day in the mall,” Star said. “I said to myself how dope would it be if there were Black people on the cards.I literally ran home and shared the idea with my husband and we’ve been producing ever since.”