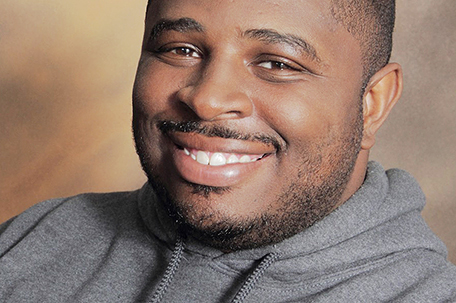 This week we’re shining a light on Anton Moore, community leader,founder of Unity in the Community and executive producer of “Weight of Death” — a gun violence docu-series scheduled to be released on November 20.

The series is executive produced by Moore along with producers Matthew Orsini and Jaime Borras, and takes a gripping look at the city’s most tragic murders of the last few years, going beyond the news headlines to explore the cause and long-term effects of gun violence.

Moore launched Unity in the Community, a non-profit organization dedicated to changing the lives of others in the South Philadelphia area in 2009, and is no stranger to the devastating impact and toll that gun violence is taking on the City of Philadelphia. He recently joined a conversation on the Philadelphia SUN Spotlight Facebook Live segment with Chris Norris, WHYY’s community contributors and engagement editor, to address the uptick in violent crimes, as well as propose solutions for a safer and better community.

Moore is a longtime leader and a South Philadelphia native who has the tenacity and heart to get into some “good trouble,” as the late civil rights leader and former U.S. representative, John Lewis would say.

“We came up with this idea while creating a Stop the Violence PSA for the community,” Moore said. “We looked at the PSA and said to ourselves that we want to tell these stories.”

Moore is known to initiate the uncomfortable but necessary conversations.

“Weight of Death” is one of the many projects he currently has his hands in as he continues to seek effective measures to help reduce what some consider another pandemic that is afflicting the people he loves.

“The stories that were told in the documentary made this project impactful, because it’s raw and real,” Moore said.

After a sold-out screening hosted by the Philadelphia Film Society earlier this month, the first full episode will stream publicly for the first time on November 20.

“It’s important that we tell these stories so that families and people in general can see in real time how gun violence is tearing families apart in our community,” Moore said. “This documentary offers positive perspectives and solutions to gun violence in America. It’ll also make people think before they act.”

Though the first of the docu-series begins in Philadelphia, the producers will extend their coverage to other crime-infested cities throughout the U.S. where gun violence dominates urban communities.

While some may find it quite impressive to rally a group of public figures, Moore said that it  wasn’t challenging getting the high profile participants to appear in the series,  because he already had a relationship with them, and that gun violence is an important issue.

The series is set to stream online at: www.theweightofdeath.com.