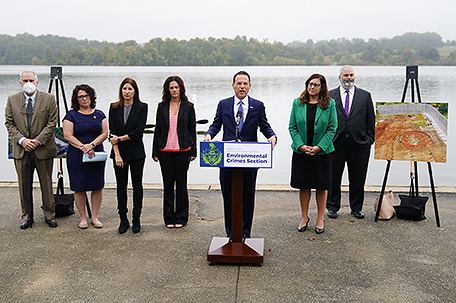 The corporate developer of a multi-billion-dollar pipeline system that takes natural gas liquids from the Marcellus Shale gas field to an export terminal near Philadelphia was charged criminally last Tuesday after a grand jury concluded that it flouted Pennsylvania environmental laws and fouled waterways and residential water supplies across hundreds of miles.

Attorney General Josh Shapiro announced the sprawling case at a news conference at Marsh Creek State Park in Downingtown, where Sunoco Pipeline LP spilled thousands of gallons of drilling fluid last year. The spill, during construction of the troubled Mariner East 2 pipeline, contaminated wetlands, a stream and part of a 535-acre lake.

Energy Transfer, Sunoco’s owner, faces 48 criminal charges, most of them for illegally releasing industrial waste at 22 sites in 11 counties across the state. A felony count accuses the operator of willfully failing to report spills to state environmental regulators.

Shapiro said Energy Transfer ruined the drinking water of at least 150 families statewide. He released a grand jury report that includes testimony from numerous residents who accused Energy Transfer of denying responsibility for the contamination and then refusing to help.

The Texas-based pipeline giant was charged for “illegal behavior that related to the construction of the Mariner East 2 pipeline that polluted our lakes, our rivers and our water wells and put Pennsylvania’s safety at risk,” said Shapiro, speaking with Marsh Creek Lake behind him.

Messages were sent to Energy Transfer seeking comment. The company has previously said it intends to defend itself. The company faces a fine if convicted, which Shapiro said was not a sufficient punishment. He called on state lawmakers to toughen penalties on corporate violators, and said the state Department of Environmental Protection — which spent freely on outside lawyers for its own employees during the attorney general’s investigation — had failed to conduct appropriate oversight.

In a statement, DEP said it has been “consistent in enforcing the permit conditions and regulations and has held Sunoco LP accountable.” The agency said it would review the charges “and determine if any additional actions are appropriate at this time.”

Residents who live near the pipeline and some state lawmakers said Mariner East should be shut down entirely in light of the criminal charges, but the administration of Democratic Gov. Tom Wolf has long ignored such calls to pull the plug.

The August 2020 spill at Marsh Creek was among a series of mishaps that has plagued Mariner East since construction began in 2017. Early reports put the spill at 8,100 gallons, but the grand jury heard evidence the actual loss was up to 28,000 gallons. Parts of the lake are still off-limits.

“This was a major incident, but understand, it wasn’t an isolated one. This happened all across the Commonwealth of Pennsylvania,” said Shapiro, a Democrat who plans to run for governor next year. He said that spills of drilling fluid were “frequent and damaging and largely unreported.”

The pipeline developer continued to rack up civil violations even after Mariner East became one of the most penalized projects in state history. To date, DEP said Energy Transfer has paid more than $20 million in fines for polluting waterways and drinking water wells, including a $12.6 million fine in 2018 that was one of the largest ever imposed by the agency. State regulators have periodically shut down construction.

But environmental activists and homeowners who assert their water has been fouled say that fines and shutdown orders have not forced Sunoco to clean up its act. They have been demanding revocation of Mariner East’s permits.

Carrie Gross, who has been living with the roar of Mariner East construction in her densely packed Exton neighborhood all day, six days a week, for much of the last four years, fears that criminal charges will be just as ineffectual as DEP’s civil penalties.

“I would say this is just another example of Energy Transfer paying to pollute, and that’s part of their cost of doing business. Until somebody permanently halts this project, our environment and our lives continue to be in danger,” Gross said.

The dental hygienist lives about 100 feet from the pipelines and works about 50 feet from them. She said she worries about the persistent threat of sinkholes, a catastrophic rupture or an explosion even after construction is over.

Shapiro’s news conference was originally rescheduled for last Monday, but was abruptly postponed after the state environmental agency provided last-minute information to the attorney general’s office. The new information led to the filing of two additional charges, Shapiro said.

Energy Transfer acknowledged in a recent earnings report that the attorney general has been looking at “alleged criminal misconduct” involving Mariner East. The company said in the document it was cooperating but that “it intends to vigorously defend itself.”

The various criminal probes into Mariner East have also consumed DEP, which has spent about $1.57 million on outside criminal defense lawyers for its employees between 2019 and 2021, according to invoices obtained by The Associated Press.

Rep. Margo Davidson resigns, after being charged with theft