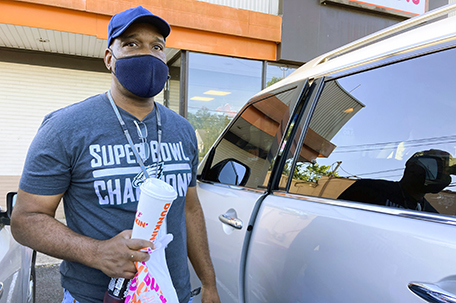 ABOVE PHOTO: John Helpburn, poses for a photo on Friday, June 10, 2022, in Morrisville, Pa. Helpburn said he missed the congressional hearings on the Jan. 6 Capitol insurrection because he was working overtime at his state job on Thursday. But, he said, he would have watched the hearing if he were off. He was ambivalent about what effect the hearings might have. He said high gas and grocery prices were weighing on him most. (AP photo/Mike Catalini)

BENSALEM, Pa. — When he was in elementary school, Dan Pigott just happened to be visiting Washington with his parents in 1973 as the Watergate hearings were underway. He managed to get a seat to watch history unfold.

That memory was particularly resonant last Thursday night when Pigott watched the opening hearing as another special congressional committee unveiled evidence of what it said was then-President Donald Trump’s “attempted coup” on Jan. 6, 2021, when he beckoned supporters to come to Washington as part of his effort to overturn his 2020 election defeat.

“I think what this administration did is far worse. We all see what happened,” said Pigott, 58, a Democrat who lives in Bucks County, Pennsylvania, north of Philadelphia. “I’m convinced he instigated all of it. … I think this is the worst attack on our system of government since the Civil War.”

His was hardly a consensus view. Others among more than a dozen voters interviewed — in coffee shops, stores and by phone — dismissed the hearing as “rubbish,” or simply did not watch.

But opinions in Bucks County, a blend of rolling farmland and densely packed well-to-do suburbs, matter more than most places because it is one of a small cluster of areas in the country where both major political parties are still competitive.

And few states will be more central to the midterm elections, with highly competitive races for the U.S. Senate and governor.

The Jan. 6 riots are certain to play a prominent role in both. The Republican gubernatorial candidate, Doug Mastriano, was seen outside the Capitol on Jan. 6, and has supported Trump’s false assertions that the election in 2020 was stolen. The GOP Senate nominee, Dr. Mehmet Oz, was endorsed by Trump.

The Nielsen Company reported last Friday that an estimated 20 million people watched last Thursday night’s hearing on the 12 television networks that aired it.

The depth of political fallout will be measured in the coming months. Republicans so far have tried to parry criticism of Trump for the riot by emphasizing rising inflation — consumer prices climbed 8.6% in May, the worst reading in more than 40 years — and blaming Democrats. The competition will be for that narrow band of voters who remain persuadable.

Bucks County is closely watched precisely because it has an ample supply of swing voters. It sided with Democrats in the presidential contests in 2016 and 2020 but helped reelect GOP Sen. Patrick Toomey in 2016 and sent Republican Brian Fitzpatrick to the House in 2016, reelecting him in 2018 and 2020. President Joe Biden carried the county by more than four percentage points over Trump in 2020.

In the interviews, Democrats said they wanted to see Trump held accountable. Republicans said the hearings amounted to a concocted excuse to persecute the former president.

Others simply had tuned out. One woman who declined to give her name said she was on her way to work with a coffee and doughnut bag in hand. Asked about the hearings she looked momentarily confused. “The what?” she asked.

“I hope that it is impossible to ignore the evidence that they come up with,” Pigott said. “I believe and I don’t think this is original but 40% always vote on the Democratic side and 40% on the Republican so it’s the 20%. Is it gonna impact them? I’m hoping it does.”

Ron Soto, 84, a retired truck driver from Langhorne, is an immovable Trump supporter. He sounded aghast that anyone would tune into the hearing.

He was watching Fox News, he said, which talked about the hearings, but didn’t air it.

“Who would watch that rubbish anyway? All they’re trying to do is isolate Trump and pick on all of his friends,” he said. “They want to find him guilty of something.”

Judy Dixon, 62, of Doylestown, said she’s a Democrat and watched because she heard there was going to be new information. She thought the hearing showed for the first time how closely Trump was involved in the events of Jan. 6.

“I think for a long time there’s been the thought that we were only prosecuting the low-level people that were breaking in. The committee clearly said it was driven by Trump,” she said.

Will the hearings change anyone’s mind about the events of Jan. 6?

“I don’t know if it’ll change minds now, but it will go down in history and people will read it and get that information and digest. Maybe in the moment you won’t want to digest the facts but one day,” she said.

She recalled her parents’ political views and the Iran-Contra affair, when the Reagan administration secretly sold arms to Iran in exchange for the freedom of Western hostages in the Middle East and passed the proceeds the contra rebels in Nicaragua for their fight against the Marxist Sandinista government.

“When I was growing up my parents were Ronald Reagan Republicans and Oliver North “ — a Marine and military aide at the center of the scandal — “was the story and selling arms to Nicaragua and I remember you parrot what your parents think. They were Republicans. I was a Republican. I read later about that hearing and all the information that was published that made me the Democrat I am today,” she said.

She added, “Hopefully this will be the same thing for this generation coming up.”

Mike Domanico operates a Trump merchandise store in Bensalem, not far from Philadelphia, with another one set to open in central Bucks County. He’s a Republican and a stalwart Trump supporter.

“I watched as much as I could stomach and then I was like this is a bunch of crap,” he said. “I couldn’t take it anymore.”

Kathie Beans, 68, of Warrington, is a Democrat and tuned in because she’s a self-described “political junkie.” She’s skeptical that the hearing will have any impact.

“I see these Trump flags still flying. I live in a very Democratic area, but do they come out and vote?” she said. “People just — they’re busy with their lives.”

People bustling about their morning routines last Friday reflected that.

John Helpburn, who said he votes Democratic now but has voted for Republicans, worked overtime last night at his job as a state worker and missed the hearing.

He said he would have watched it if he’d been home but was ambivalent about the impact. High gas and grocery prices were the biggest issues for him.

Nicole Suto, who recently moved from New Jersey to Bucks County, said she didn’t realize the hearings were on TV but said she would watch them later on TikTok.