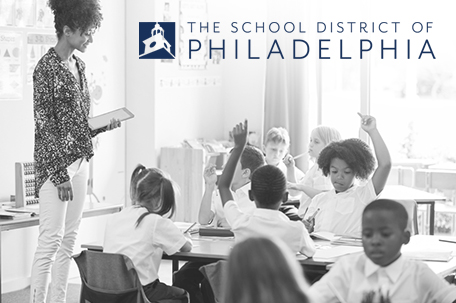 The City of Philadelphia, the Philadelphia School District and union officials have announced that PreK through second-grade students will begin returning to school buildings for in-person learning on a rolling schedule beginning Monday, March 8.

Following a mediation process led by a City-appointed neutral third-part, the School District of Philadelphia and Philadelphia Federation of Teachers (PFT) agreed upon a process that allows the PFT to individually review plans for all schools and start bringing students and staff back for in-person instruction.

In an effort to begin bringing students back for in-person instruction sooner rather than waiting for all of the schools to be individually reviewed and approved, the District and PFT have agreed to review the schools in batches.

The first 53 schools have been approved to resume in-person instruction using the District’s hybrid model on Monday, March 8 for PreK to second-grade students who chose hybrid learning during the selection process last fall. Teachers at those 53 schools will report to work this Wednesday, March 3. The list of these first 53 schools is:

A cohort of new schools will come back each week until all PreK to second-grade classes have returned. The goal is to have the return dates for all PreK to second-grade hybrid learning students announced by March 22. Each Monday, an announcement will be made regarding which schools will open the following week, teachers will return to those buildings on Wednesday, and students will return the following Monday.

“While I know the past year—and especially the past few weeks—has been frustrating, I want all parents and other caregivers to know that everyone involved in this process had the best interest of Philadelphia’s students at heart,” said Mayor Jim Kenney. “We’re all glad to have reached common ground so that we can move forward with getting students back into school buildings and supporting Philadelphia’s children and families.

I thank the leadership at both the School District and the PFT for working together to ensure the safe return of staff and students. The return to in-person learning is vitally important for our young people—not only academically, but also for their social-emotional well-being.”

To prepare for in-person learning, parents and families are encouraged to view the District’s “Safe Return to School” and “Clean and Healthy Schools” videos, and visit: www.philasd.org/aes

to learn more about the many layers of safety the District has in place.

“We are excited to offer the in-person learning opportunities that so many of our families want and need. Despite the heroic work of our educators, many of our students have struggled academically and others are suffering feelings of isolation after having to sit before a computer screen for nearly a year,” said William R. Hite, Jr., Ed.D., superintendent of the School District of Philadelphia. “We all know that this is not the most effective way for our children to learn. This is why we have had a strong sense of urgency around and commitment to safely reopening our schools, just as many other schools and school districts have already done locally and nationally.”

The School District of Philadelphia has put in place multiple layers of safety including:

• mandatory mask wearing or other facial covering, which will be provided to students and staff;

• and a COVID-19  testing program in place for students and staff.

“The Union triggered the intervention of the neutral third party, as negotiated by the PFT and District, and we were able to utilize the mediation process to secure and assure a safe plan to reopen school buildings,” said Jerry T. Jordan, PFT president. “Today, we are able to confidently say that 53 schools are safe for re-occupancy based on a detailed analysis made possible by the mediation process. I applaud all parties for their commitment to ensuring the safety of our educators and the young people they serve. Nothing could be more important.”