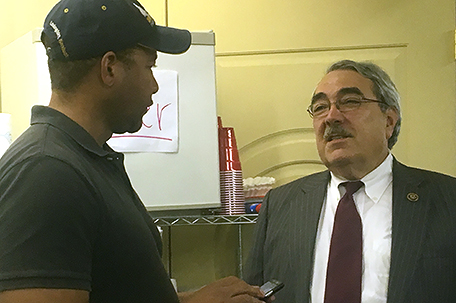 Were it not for the fact that the Black community came out in force for her, Hillary Clinton wouldn’t be in position to be the first woman to become president of the United States. And U.S. Rep. G.K. Butterfield, chairman of the Congressional Black Caucus, is determined to make sure the former Secretary of State is reminded of that every day.

As he walked into the “Hillary for America” campaign office on Frankford Avenue, U.S. Rep. G.K. Butterfield (D-NC) shook hands, took pictures and shared stories with the volunteers who were there manning the phone banks for Democratic presidential candidate Hillary Clinton.

Butterfield, the Chair of the Congressional Black Caucus, was in town to visit friends and rally the troops on behalf of the former Secretary of State to help her, and the rest of the Democratic ticket, defeat Republican presidential candidate Donald Trump and company in November.

While Clinton currently enjoys a 10-point lead in Pennsylvania, it’s important that her supporters in the Keystone State not allow complacency to set in, Butterfield said.

“Polls can be deceiving,” Butterfield said. “You should always assume that the race is close. [Trump] is already sending coded messages that if he loses, it’s because we cheated. But don’t panic. Don’t get mad. Just get engaged.”

Butterfield hopes to close his two-year term as the Chairman of the Congressional Black Caucus by not only keeping the White House in Democratic Party hands, but also by helping to give the House and Senate back to the Democrats.

He represents North Carolina’s First District and his father, G.K. Butterfield Sr., was one of North Carolina’s first Black elected officials since Reconstruction. Rep. Butterfield was a Superior Court Judge for 15 years and has been a member of Congress since winning his seat in a special election in 2004.

The SUN sat down with Rep. Butterfield to talk about his support for Hillary Clinton and what that means for the Black community, the relationship between the Congressional Black Caucus and millennials, and how Donald Trump is the nightmare that the Republican Party brought on itself.

SUN: Thank you for your time Congressman Butterfield. I guess that my first question for you is, how important do you think the Black vote is in this election and why should Blacks support your candidate, Hillary Clinton?

GKB: The Black vote is incredibly important. First of all, Hillary wouldn’t be the Democratic nominee without the Black community. We know it, and she knows it. Because of this, we’re confident that the Black agenda—an agenda that includes Black Supreme Court appointees—is going to be a meaningful part of Clinton’s agenda. We’ve had some meaningful preliminary discussions with her about these things and we’re encouraged by her responses.

SUN: In what ways?

GKB: It’s too early to talk about the details, but the Congressional Black Caucus is confident that issues important to the Black Community will be addressed within the first 100 days of the Clinton Administration. That’s important because there’s something magical about the first 100 days of any administration. We want to make sure that when she begins her administration, that the items on the CBC agenda are at the top of her agenda.

SUN: There has been some confusion about what, exactly, is the Black Agenda. Can you tell me what it is?

GKB: The CBC agenda includes things like criminal justice reform, and support for historically Black colleges and universities. Investment in infrastructure is also a part of it too.

But the top of our agenda is voting rights, and we’re working on a bill on that now. We’re also trying to get some common-sense gun legislation passed, because of all of the mass shootings, but our pleas have fallen on deaf ears with the Republicans in Congress. Speaker [Paul] Ryan has promised that there will be some of the legislation voted on in September, but it probably won’t be massive.

We’d also like to see drug sentencing disparities addressed so that crack no longer merits a higher sentence than powdered cocaine and for marijuana to be decriminalized. We need to re-think the War on Drugs.

SUN: A lot of young, Black, millennials were angry with the CBC because many of it’s members supported Clinton early, while they supported her opponent, Bernie Sanders.

Because of this, they, and even some older Blacks, believe that the Congressional Black Caucus is ineffective and out of touch. They believe that you have no power to enforce any demand you make of Clinton and that as soon as she’s elected, she’ll stop taking your calls. What do you have to say to that?

GKB: I say to them, stay tuned! Watch what we do. We’re reminding her that we’re the reason why she’s here and we’re going to hold her accountable for our part in her success. We believe that many of the part of the Black agenda are part of her agenda. Hillary gets it.

SUN: What would you like to see a President Clinton do first?

GKB: We’d like to see her appoint a female, African American Supreme Court justice. She’ll get a chance to do it because the [Supreme Court Justice Antonin] Scalia opening is still unfilled and there will be at least two other openings during her term. We wanted [President Barack] Obama to do it, but it didn’t happen.

SUN: Speaking of President Obama, we’re nearing the end of the final term of the nation’s first Black president. You have some people who think that he did a great job as president and some who believe that he didn’t do anything for Blacks during his two terms in office. What do you think of the Obama presidency?

GKB: I’ve been a supporter of Obama’s from day one, from when he was a senator and was running his presidential campaign by working out of his home. President Obama has been an extraordinary president under the circumstances that have existed since he’s been in office. When he was elected, the economy was in the tank. There were over 800,000 jobs lost. He had to deal with the economy. He managed to get the Affordable Care Act passed, and to get us out of Iraq.

He’s been an excellent president in the face of unfair oppression. Could he have done more? Yes. But in the political climate that he was working in, he wasn’t able to get all of his ideas implemented. You need a Congress that’s going to work with you, and he only had that in his first term. I would have liked to see him do more for HBCUs, but on the whole, I think he’s been an excellent president.

SUN: You mentioned some of the opposition that President Obama had to deal with in his time as president. One of the people who gave him opposition was Donald Trump, the current Republican nominee for President.

GKB: He was one of the people challenging the President’s citizenship.

SUN: Do you find it kind of ironic that this man who challenged the President’s citizenship is now the Republican nominee for president?

GKB: I think it’s intentional. Trump is a shrewd businessman. He knew that talking up the Birther Movement would resonate with certain groups and it did. He built out from there. But now, he’s brought all of those Birthers with him and they’ve taken over the Republican Party.

SUN: When you look at what the rise of Trump has done to the Republican Party, and what it could do to them in November, what do you think?

GKB: I blame the GOP for their dilemma. I’ve talked to a lot of the party’s more moderate representatives and they’re appalled at the GOP’s direction. But they created this problem themselves. They’ve been telling their base for years that they’re going to be able to pay down the national debt, create jobs and solve all their problems by cutting taxes. Their base has believed them, and brought into it. And it didn’t happen because it never could. Now that base is angry and saying “You lied to us!” This created the opening for Trump. And it’s going to result in a massive landslide for Democrats.

SUN: Thank you so much for your time Congressman Butterfield. I really appreciate it.