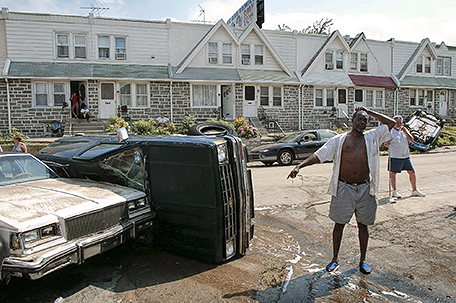 ABOVE PHOTO: Keith Dutton points to his car, next to one flipped on its side by flood water, in Upper Darby, Pa., Sunday, Aug. 1, 2004. “All of the sudden a manhole cover shoots up out of the ground in front of my home and water was just shooting out,” said Dutton. Torrential rain and flash flooding in the Philadelphia region Sunday morning caused airport delays, transit stoppages, apartment evacuations and a few vehicle rescues, officials said. (AP Photo/George Widman)

Now that President Biden’s infrastructure Plan has passed the Senate, residents of Philadelphia’s Eastwick neighborhood are hoping to get some of it to solve a recurring problem.

For many of us, when thunderstorms are expected to hit the area, it means having to find an umbrella, making sure that the windows on your car are closed and trying not to get wet. But for Gordon Branham and his neighbors on Saturn Place in Philadelphia’s Eastwick section, thunderstorms mean something different.

They mean flood warnings. They mean the possibility of severely flooded basements. They mean lost property.  And for Branham, a Vietnam veteran who has been there since 1982, the floods mean post-traumatic stress.

“Every time it rains now, we get two or three alerts that it’s going to flood and that the flood is  imminent,” Branham continued. “Just those alerts make our PTSD worse. It affects us mentally and physically.”

Because Saturn Place sits where the Cobbs and Darby Creeks converge, borders the Clearview Landfill and is at the city’s lowest point, 2020’s Tropical Storm Isaias did a real number on the neighborhood, causing the kind of flooding that led to some residents having to be rescued.

And that’s why the residents there are hoping that Councilmember Kenyatta Johnson (D-2nd Dist.) can get the $500 million from the Biden Administration that might stop this from happening.

On Tuesday, the Senate passed a $1.2 trillion infrastructure package designed, among other things, to fix roads and bridges. Last week, Johnson sent a letter to Transportation Secretary Pete Buttigieg asking that Eastwick be made a priority and given $500 million toward flood mitigation efforts.

While the city has a plan of its own for infrastructure, the residents of Eastwick have been through so much when it comes to flooding that it needs a more directed plan, Johnson said. “This is a call to action,” Johnson said. “This is a call for environmental justice and to make sure that the concerns of Eastwick residents are heard. This is a middle class African American community, and we want to make sure that they get their due when it comes to flood mitigation.”

The House is expected to come back early from summer break to take up the bill and get it to President Joe Biden’s desk.