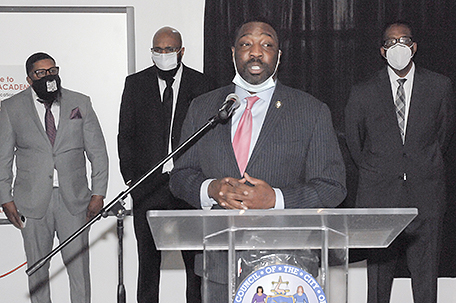 At press time, Mayor Jim Kenney was scheduled to present his $5.18 billion 2022 fiscal year spending plan to Philadelphia City Council. The spending package contains no new tax increases, layoffs or any cuts that will directly impact city services, said Marisa Waxman, the city’s budget director. While some departments will have to take a 5% cut to their budget, those cuts are expected to impact “back-office functions” only, she said.

It does, however, include new spending designed to address the city’s ongoing gun violence problem. During Mayor Kenney’s bi-weekly press briefing on gun violence, it was announced that revisions to the city’s Roadmap To Safer Communities anti-violence initiative would include $18.7 million in new spending, which would bring the total spending on this effort to $35 million.

For his former colleagues on Council, it’s that part of Mayor Kenney’s budget that will get the most focus.

At a press conference held on Tuesday, Council President Darrell Clarke unveiled an agenda put forth by Council that would focus on ending the violence through the recently approved Neighborhood Preservation Initiative and other programs.

Attacking the problem of gun violence isn’t enough, Clarke said. Preventing it has to be the focus.

“The levels of gun violence seen in our city today are unprecedented and unacceptable,” he said. “We must think and act differently. We will prioritize programs that offer young people hope and the opportunity to put their energies to more constructive uses. The bottom line is, [the gun violence] has to stop.” Among the agencies that Council hopes to work with toward this end played host to the body, NoMo Inc., an organization based in North Philadelphia that specializes in early intervention and job readiness.

Providing the means to help young people connect to the kinds of opportunities that will keep them away from violent situations has to be a priority, Councilmember Kenyatta Johnson, co-chair of Council’s Special Committee on Gun Violence, said.

He’s hoping that at least some of the $18.7 million Kenney has proposed will go to organizations in the communities hurt most by the violence. But even with the money, the people living in these communities have to realize that nothing will change until they demand it, Johnson said.

This ability to move forward and put more money toward fighting gun violence is a result of the $1.4 billion the City of Philadelphia got through the federal American Rescue Plan. The $1.9 trillion plan, which was signed into law last month, provided funding to cities and municipalities that had been body slammed by expenses connected to the COVID-19 pandemic.

Had it not passed, Philadelphia would have had to try and fill a $450 million budget hole brought on by reduced out-of-town wage tax revenues and spending that continues to be necessary due to the pandemic. That would have led to some really tough choices including layoffs, and cuts to city services, Rob Dubow, the city’s finance director, said.

“This would have been a disastrous budget without federal help,” he said. “This truly was a rescue plan.”

Arts organizations like the African American Museum in Philadelphia, the Philadelphia Museum of Art, and the Philadelphia Cultural Fund also received increased funding as a part of the plan. AAMP got an additional $500,000 and the cultural fund was doubled to $2 million.

Helping Philadelphia’s first responders better handle situations like the one that resulted in the death of Walter Wallace Jr. at the hands of Philadelphia Police in October is also addressed in the budget.

Mayor Kenney has proposed $13.2 million toward this effort, with the bulk of it — $7.2 billion — going toward expanding the 24-hour Philadelphia Crisis Line, and a $6 million co-responder program that would create a teams of behavioral health specialists and police officers trained in crisis intervention that would handle mental health related calls. The city’s Citizen Police Oversight commission would get a total of $1.9 million, $900,000 more than it had been given the previous year. While this allocation has been made, the new commission, which was approved by the voters in November, is still in the formative stages, Managing Director Tumar Alexander said.

There has also been $25 million set aside to cover possible benefit and salary increases for city employees as contracts for the city’s unions expire this summer.

The plan also includes a $270 in bond borrowing designed to finance such things as repaving city streets and curb cuts, refurbishing city parks, providing funding for public transportation and other improvements.

A schedule for public hearings into the budget will be made available soon. Please follow the SUN for the dates and times for the departments of most interest to you.