Stepping into tomorrow with a career in the electrical trades 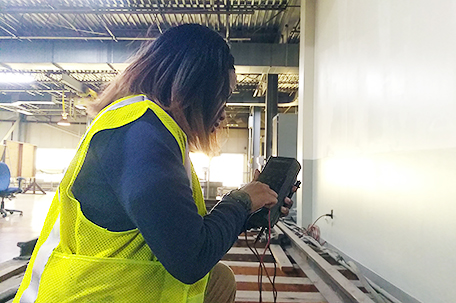 ABOVE PHOTO:  Jhanée adjusts her meter settings to prepare to take voltage readings on the track circuit.

After years of a life filled with chaos, it’s hard to figure out which direction to take. Getting to “normal” is not as easy as some make it out to be. You first have to envision what “normal” looks like. It takes a particular combination of coping skills, creativity and determination that not everyone possesses.

Jhanee Franklin, a 22-year-old Olney resident, had a rough start in life, spending years in the Deparment of Human Services system after experiencing abuse in her family home. During her years in the system, constant movies from a shelter, to a group home, and back again caused major upheaval. In spite of it all, she still managed to finish high school, but not without tremendous effort and personal sacrifice.

Franklin knew that in order to gain total independence from the system, she was going to have to formulate a plan and follow through on it. 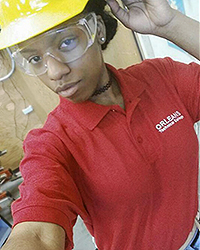 Photo from Jhanée’s days as a student in the Residential & Commercial Electricity program at Orleans Technical College. Classes start new every few months.

After two aborted attempts at attending Community College of Philadelphia, (she in the middle of a trial with her family and couldn’t focus), Franklin tried a school that taught medical assistance, but soon discovered that it was not a career path she wanted to explore.

A series of low-paying jobs only served to perpetuate the chaos that she was trying so hard to overcome. She knew she needed stability. It was time to recalibrate.

Around this period, Franklin met a contractor through DHS who was doing repairs. She had always been fascinated by assembling and building furniture when she was younger and was curious to learn more about the building trades. They struck up a friendship, and she began working for him.

The contractor suggested that she focus on the electrical trade due to the high demand for those skills in all building projects, so she decided to enroll at Orleans Technical College in Northeast Philadelphia to study it formally.

“The fact that I wasn’t sitting in a boring lecture and was able to work with my hands excited me,” Franklin recalled. The fact that I could turn it into a well-paying career really pushed me through.”

She faced a whole new set of challenges while matriculating at Orleans. 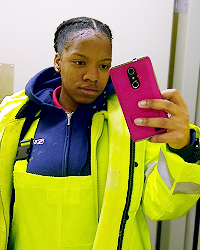 A bundled Jhanée takes a selfie before getting ready to go outside and work on the tracks in the snow and cold.

Her car was repossessed, making it impossible to commute to the part-time contracting job. Eventually, she was faced with another housing crisis, where she ended up sleeping on an air mattress in the van of Jeffrey Butler, a generous fellow student and now lifelong friend.

Franklin graduated from Orleans in the fall of 2016, and her goal was to use her skill set to build a career, rather than settle back into a low-pay, unstable employment rut, and finally begin to stabilize her life.

Within one month of graduation, she had an interview with SEPTA and was offered a position as a signal maintainer in February of this year.

“I went from making $10 an hour at a security job I hated to making $28 an hour here, and I love my job. I owe it all to Orleans Tech,” Franklin said.

Throughout her work day, she is responsible for maintaining the signal circuit on the tracks, a critical tool in rail safety.

“Thousands of people put their lives in our hands, and knowing that my job is so important makes me feel good. I’m doing this for a good reason,” Franklin said.

Her mostly male co-workers at SEPTA have been great.

“They are very helpful,” she stated. “They tell me the places where they messed up [when starting out] and have been very supportive.”

Franklin is still in the early stages of implementing her new career and life plan but now knows that she has the tools to implement it successfully. In spite of still having to deal with some of the chaos that has plagued her young life so far, she remains hopeful and positive. She loves the field, and plans on exploring it as far as it will take her.

“Currently, I’m still trying to stabilize,” she said. “I move around a lot, and am [temporarily] back at my mother’s house, where I am paying $50.00 a week. The tensions are still there, but I am trying to save up a for a deposit on my own place.”

Five ways to put Web 2.0 to work in your career search